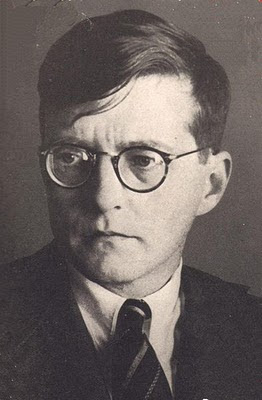 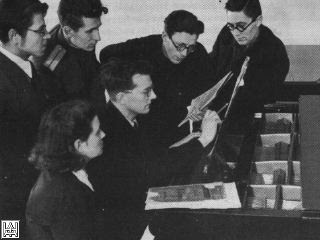 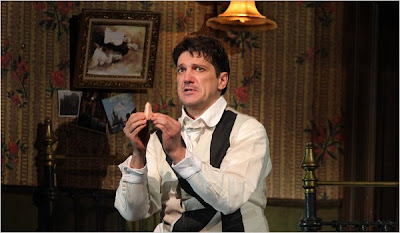 Dmitri Shostakovich's The Nose. Metropolitan Opera, New York, NY. "[T]he South African artist William Kentridge, who directed this production, helped design the sets and created the videos that animate the staging, received the heartiest bravos. . . . Stop-action animation and theatrical design are central to Mr. Kentridge’s work, and he has unleashed his imagination on Shostakovich’s bitterly satirical and breathless opera. Musically you are not likely to hear a more insightful, ornery and, when appropriate, achingly poignant account of Shostakovich’s still-shocking score than the performance the conductor Valery Gergiev drew from the Met orchestra and chorus and the large cast: some 30 artists, singing about 80 solo roles. It was a breakthrough night for the baritone Paulo Szot in his Met debut as Kovalyov, the beleaguered petty bureaucrat who awakens one morning to find his nose missing. This unconventional opera, which Shostakovich wrote at 22, had its premiere in St. Petersburg (then Leningrad) in 1930. The dissonant, brutal score was instantly condemned by Soviet authorities, and the work was not performed again in Russia until 1974. It is time to reassess this opera, and the Met deserves thanks for championing it. Gogol’s absurdist 1836 story hooked the immensely gifted and ambitious young Shostakovich. Its sorry hero, a former major and a humdrum collegiate assessor, finds himself inexplicably noseless. Suddenly he has no profile, and not just metaphorically, in St. Petersburg society. Setting out to find his missing part, Kovalyov spots it at a cathedral, human size and dressed as a state councilor, a superior to Kovalyov. In many great operas composers have had to whittle down an epic literary work into a suitable libretto. In The Nose Shostakovich, who fashioned the libretto with three other writers, does the opposite. Gogol tells this baffling tale with disarming simplicity. When a police inspector presents Kovalyov with his missing nose, for example, the inspector explains in just a couple of sentences that he nabbed the culprit as it was trying to board a train out of the city. To Shostakovich this brief exchange screamed out for operatic dramatization. Here it becomes an extended, hyperpaced choral ensemble with milling crowds, vendors, policemen and the fleeing nose. Shostakovich’s tendency toward long-windedness is already evident, even though the opera lasts just 1 hour 45 minutes, and the Met, rightly, performs it without intermission. Yet in scene after scene Shostakovich’s music, scored for an orchestra pulsing with reedy woodwinds, snarling brasses and steely percussion, dazzles you: the sputtering, raspy harangue that the wife of the barber Ivan delivers when she discovers that her hopeless spouse has dropped someone’s nose into the bread she has baked; the scene in which Kovalyov first appears, in the throes of an erotic dream, depicted with instrumental grunts and atonal groans; the wordless chorus at the cathedral that lends the bleak comedy a fleeting passage of mysticism. Shostakovich evokes frothy gallops, slithering waltzes and circus bands with a fractured modernist brilliance that equals Stravinsky’s. The Nose is the work of a young man eager to show off. . . . Mr. Kentridge sets “The Nose” around the time of its 1930 premiere to explore themes of totalitarian oppression. The sets, which he designed with Sabine Theunissen, are covered with newsprint evoking a society drowning in propaganda" [Anthony Tommasini, The New York Times, 3/6/10].

Perspectives: Tundra Songs. Kronos Quartet. Carnegie Hall, New York, NY. "Kronos . . . looked northward, presenting music and performers from within or near the Arctic Circle. Mostly the quartet stood aside, leaving the music making to guest performers, but each half of the program ended with a collaboration that let the Kronos and its guests explore one another’s turf. Most of the works were hybrids of exotic timbres, electronica, and indie pop. But there were moments of calm before this storm, in the opening set by Ritva Koistinen. Ms. Koistinen, who plays the kantele, a Finnish zither with a delicately ringing timbre, began with a traditional piece, Church Bells of Konevitsa, which conveyed a sense of the gentle-voiced instrument’s color and nuance. She then gradually pulled back the curtain on the kantele’s broader palette: the chromaticism in Erkki Salmenhaara’s Inventio, the swirling figuration that melts into a meditative reverie in Karin Rehnqvist’s Interludes, and the pentatonic tracery of Toivo Elovaara’s Forest Lake, each touching on a different aspect of the kantele’s range. Ms. Koistinen was at her best in Arvo Pärt’s Pari Intervallo, an early organ work that had an otherworldly charm in the kantele’s plucked timbres. Hurdy-Gurdy, a Swedish duo (Stefan Brisland-Ferner and Totte Mattsson) that performs on the instrument it is named for, and on laptops loaded with sampled and manipulated hurdy-gurdy sounds, closed the first half. Mr. Brisland-Ferner’s Delirium seemed aptly named: an eerie, high-pitched tone, cranked out on one of the hurdy-gurdys, grew into a richly chromatic torrent as samples expanded the texture. The group also played its high-energy, dancelike arrangements of three traditional pieces -- Ynglingen, Maran and Spindelleken, the last with a lovely plucked melody -- and joined forces with the Kronos for a vigorous account of Scatter, a work Mr. Brisland-Ferner and Mr. Mattsson wrote for the quartet in 2008. Kimmo Pohjonen and Samuli Kosminen, a Finnish duo, do for the accordion what Mr. Brisland-Ferner and Mr. Mattsson do for the hurdy-gurdy: Mr. Pohjonen plays the actual instrument and occasionally vocalizes (he doesn’t sing, exactly) and Mr. Kosminen operates a laptop with sampled accordion and vocal sounds. And though it did play a couple of gentler pieces -- Mr. Pohjonen’s Ulaani and Kluster -- the duo shares with Hurdy-Gurdy a passion for fast, virtuosic, beat-heavy freakouts that would yield an irresistible visceral thrill even in more conventional timbres. The Kronos and Tanya Tagaq, an Inuit throat singer from Nunavut, the Canadian territory, closed the program with Derek Charke’s Tundra Songs, a rich-textured five-movement work in which a combination of slowly unfolding, consonant string writing, Ms. Tagaq’s athletic vocalizations, and manipulated recordings of arctic sounds (ice cracking, raven calls, seals) evoke the change of the northern seasons and tell the story of Sedna, an Inuit goddess who is described, in Ms. Tagaq’s narration, as the foremother of humanity" [Allan Kozinn, The New York Times, 3/14/10].

Gerald Finley and Julius Drake perform music of Maurice Ravel, Samuel Barber, and Charles Ives. Zankel Hall, New York, NY. "Mr. Finley and Mr. Drake were ideally subtle collaborators in Ravel’s Histoires Naturelles, a set of five comic animal portraits. Mr. Finley paid tribute to another anniversary celebrant, Samuel Barber (whose centenary is commemorated this year), in four disarmingly simple songs, the most striking of which was Solitary Hotel, Barber’s introspective setting of a section from Joyce’s Ulysses. A concluding Ives group drew fully on Mr. Finley’s expressive range: he began with an intensely focused reading of West London, then lightened the mood with In the Alley, slipped into an Old West accent for Charlie Rutlage and closed with the zesty violence of Slugging a Vampire [Allan Kozinn, The New York Times, 4/21/10]. 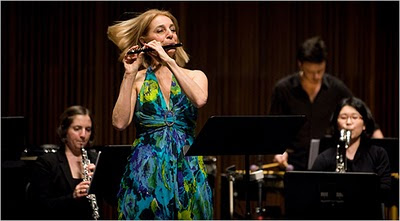