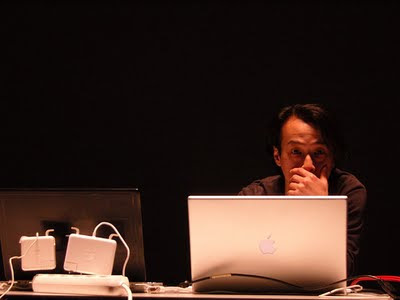 Ryoji Ikeda's The Transfinite. Park Avenue Armory, New York, NY. Through June 11. "Data has no aesthetic properties, and the composer Ryoji Ikeda, making music out of data, goes in hard for aesthetics: so much that he dares you to think his art contains nothing but. His best work makes epiphanies out of simple digital noises: tiny, evenly separated blips of static, soft applications of sub-bass, a bell tone, lots of space; dance rhythms, sometimes, if you want them to be. (They involve much more thought and organization than that, but he doesn’t make you very aware of the creator’s hand.) His CDs seem to describe a physical environment, but it’s better if you hear them in a room where he’s set up the speakers. The Transfinite . . . lasts only 9 minutes 20 seconds before it loops, but it’s dynamic and intense, almost orchestral, without a single melody. On giant screens, including part of the floor, it visualizes the music’s digital cross-breezes into bar codes and binary patterns. The Armory puts the piece in an environment you can walk through, with different sounds pointing in different directions in the hall. It’s dark, and you feel insignificant in the big room amid the big sounds; it seems like a natural world in there, a clearing in the digital forest. You may find yourself reacting to music on a more basic level than usual, going animal: you may want to prowl in circles, feel the cool white floor with your cheek, chase after echoes" [Ben Ratliff, The New York Times, 6/3/11]. 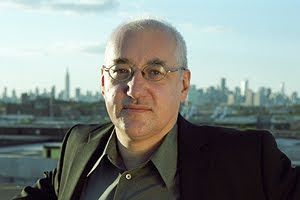 Violinist Anne-Sophie Mutter and the New York Philharmonic, conducted by Alan Gilbert, in the premiere of Sebastian Currier's Time Machines. Avery Fisher Hall, New York, NY. "She was riveting in the premiere of the American composer Sebastian Currier’s Time Machines (2007). Mr. Gilbert, a consistently impressive conductor of contemporary music, drew assured and rapturous playing from the orchestra in Mr. Currier’s demanding 30-minute score, composed in 2007. . . . Currier writes that each of the seven movements of Time Machines explores 'some aspect of the relationship between the perception of music and time.' Of course, you could argue that every musical work is an exploration of time. But this one takes that challenge seriously. In the first movement, 'Fragmented Time,' the violin plays a near-continuous line of buzzing, fitful notes, riffs and chords. The orchestra reacts with nervous harmonic bursts, skittish figures for an intrusive piano and, now and then, a sustained series of chords that seem to want to stop the music cold. In a way, the violin is all that holds the movement together. The subsequent movements explore other elements of time and space. 'Delay Time' is like an eerie prolongation of a reverberating sound. 'Compressed Time,' true to its title, is all wired energy and abrupt phrases, with the violin tossing off a stream of 16th notes that could be some crazed perpetual-motion toccata. Though this work is driven by Mr. Currier’s handling of rhythm and time, the music’s harmonic allure and textural richness were often its most striking qualities. Mr. Currier’s musical language, which draws from tonal and atonal sources, if not pathbreaking, is very personal. With his acute ear and sensitivity to color, whole passages of the piece were rapturously beautiful, especially the mystical final movement, 'Harmonic Time.' Ms. Mutter played magnificently" [Anthony Tommasini, The New York Times, 6/3/11].

Someone Talked! Joan Morris and Robert White, accompanied by William Bolcom. Metropolitan Museum, New York, NY. "[T]he show was a cozy, familial affair well stocked with little anecdotes -- Mr. Bolcom’s memories of his boyhood newspaper route . . . . But the 28 selections, by names like Loesser and Mercer and Berlin, gave a good sense of the range of work during the period, from peppy anthems to melancholy ballads. The audience was told to 'just imagine you’re in a radio station during World War II,' but the mood was really closer to Mr. Schumacher’s observation about Eddie DeLange and Sam H. Stept’s stirring This Is Worth Fighting For, which closed the first half: 'It’s like a Norman Rockwell painting in music.' . . .
Ms. Morris, a wonderful artist who introduced many of Mr. Bolcom’s works, including his masterpiece, Songs of Innocence and of Experience, pointed the texts of her selections with purpose" [Zachary Woolfe, The New York Times, 6/12/11].

Philip Glass. Grace Rainey Rogers Auditorium, Metropolitan Opera, New York, NY. "Followers of the composer Philip Glass could scarcely miss a turn in recent decades from the hypnotic extended works that earned him the Minimalist label toward the traditional forms and trappings of the classical music mainstream. Interviewing Mr. Glass onstage in the Grace Rainey Rogers Auditorium at the Metropolitan Museum of Art on Saturday night, Richard Guérin, the associate director of Mr. Glass’s record label, Orange Mountain Music, noted the development. 'If you told somebody in 1972 that we’d be here listening to your Fifth String Quartet, a lot of people wouldn’t believe it,' Mr. Guérin said. 'They still wouldn’t believe it,' Mr. Glass replied. His response drew laughter from the large, clearly devoted audience on hand to hear the Days and Nights Festival Players, the house band Mr. Glass has assembled for his new summer festival in Carmel Valley, Calif., scheduled for August. Tradition must surely be on Mr. Glass’s mind: with his recently completed Symphony No. 9, which will have its American debut at Carnegie Hall on his 75th birthday next January, he has achieved a fearful symmetry with Beethoven, Schubert, Bruckner and Mahler. (Lest you worry about Mr. Glass’s health, know that he mentioned having already finished a 10th Symphony.) His festival will look partly back to the chamber music he admired in his youth, including performances of pieces by Mendelssohn, Schubert, Schoenberg, Bartok and Shostakovich. Mr. Glass’s quartets provide evidence of a mostly graceful transition. The First, from 1965, is like a sliver chipped from one of Morton Feldman’s imposing glaciers; three more quartets, unnumbered, count among his juvenilia. But Mr. Glass’s four mature quartets, Nos. 2 to 5, show him using the surging, shifting rhythms and tumbling arpeggios of his early Minimalist works as building blocks for pieces that hew close to Classical notions of proportion and pacing, along with an almost Romantic emotional acuity. The repetitions remain but seldom linger. In the violinists Maria Bachmann and Tim Fain, the violist David Harding and the cellist Matt Haimovitz, Mr. Glass had performers well versed in his style and keenly aware of what precedents he meant to evoke. If the group did not yet sound like a polished ensemble in its account of Mr. Glass’s genially restless Fifth Quartet, it compensated with deliriously beautiful sound and expressive spirit. (In a sense, this was a premiere: in the interview Mr. Glass said that he had fixed a wrong note present since the work’s inception in 1991.) With the pianist Jon Klibonoff, Ms. Bachmann played Mr. Glass’s Sonata for Violin and Piano with the kind of intensity and ardor normally reserved for Romantic fare, an approach that suited the restless permutations of the outer movements and the limpid central section. Mr. Klibonoff also joined Mr. Fain for the American premiere of Pendulum, a brief, coursing showpiece given a whirlwind account" [Steve Smith, The New York Times, 6/19/11].
Posted by Mark Alburger at 8:00 PM 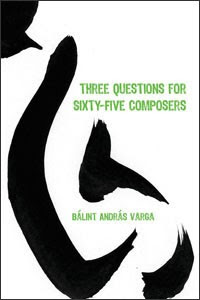 Few books seem to merit immediate review. This is one of them. The queries posed by Balint Andras Vara in his Three Questions for Sixty-Five Composers are

1. Have you had an experience similar to Witold Lutoslawski's: he heard John Cage's Second Piano Concerto on the radio -- an encounter which changed his musical thinking and ushered in a new creative period, the first result of which was his Jeux Venetians (1960-1961).

2. A composer is surrounded by sounds. Do they influence you and are they in any way of significance to your compositional work?

3. How far can one speak of a personal style and where does self-repetition begin?
Posted by Mark Alburger at 6:00 PM