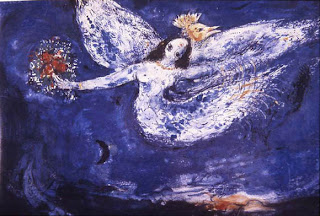 The Firebird at 113 / Mark Alburger 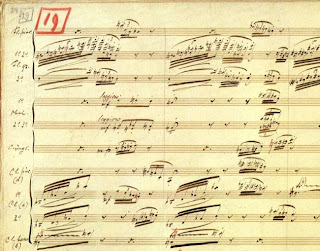 Through the year of of Nicolai Rimsky-Korsakov's death in 1908, Igor Stravinsky composed a number of compositions:

In 1909, Fireworks was performed at a concert in St Petersburg. Among those in attendance wasSergei Diaghilev.  Like Stravinsky, Diaghilev had initially studied law, but had gravitated via journalism into the theatrical world.  That same year in Paris, he launched the Ballets Russes, initially with Alexander Borodin's Polovtsian Dances from Prince Igor and Rimsky-Korsakov's Scheherazade.  To present these, Diaghilev recruited choreographer Michel Fokine, designer Léon Bakst and dancer Vaslav Nijinsky.  Diaghilev's intention, nonetheless, was to produce new works in a new style, and he was looking for talent.

The Firebird was the first of Ballets Russes production to have an all-original score.  The idea of mixing the mythical Oiseau de Feu with the unrelated Russian tale of Kaschei the Deathless perhaps came from a popular child's verse by Yakov Polonsky, A Winter's Journey:

And in my dreams I see myself on a wolf's back
Riding along a forest path
To do battle with a sorcerer-tsar
In that land where a princess sits under lock and key,
Pining behind massive walls.
There gardens surround a palace all of glass;
There Firebirds sing by night
And peck at golden fruit.

Designer Alexandre Nikolayevich Benois collaborated with Fokine, drawing from several books of Russian fairy tales including a collection by Alexander Afanasyev, to develop the story of the Firebird and the evil Kashchei.

While Diaghilev initially approached Anatoly Lyadov (1855–1914) to write the music, there is no evidence, despite the much-repeated story that Lyadov was slow to start, that the composer ever accepted the commission.  There are indications, however, that Nikolai Tcherepnin (1873-1945) had started music which became his Enchanted Kingdom (1910), but that he, for reasons unexplained, withdrew from The Firebird.   Diaghilev eventually transferred the project to the 28-year-old Stravinsky.

The ballet, conducted by Gabriel Pierne, was premiered by the Ballets Russes in Paris on June 25, 1910.  Even in rehearsal, the company sensed a huge success in the making; and every performance of the first production, as ballerina Tamara Platonovna Karsavina (1885-1978) recalled, met a "crescendo" of success.  Critics were ecstatic, praising the ballet as an ideal synergy of choreography, design, and music.  The scenery was designed by Alexander Golovine and the costumes by Leon Bakst.

For Stravinsky, it was a major breakthrough both with public and critics, Michel-Dimitri Calvocoressi hailing Stravinsky as the heir to The Russian Five.  The Firebird's success also secured Stravinsky's position as Diaghilev's star composer, and there were immediate talks of a sequel, leading to the composition of The Rite of Spring (1913), via Petrushka (1911).

Stravinsky used principle themes from works by Rimsky-Korsakov in his score.  The Infernal Dance of Kaschei borrows the Minor-Lydian synthetic scale utilized for the character Chernobog in Rimsky's Mlada.  The Firebird's Khorovod dance uses the same folk tune found in RimskySinfonietta,  Op. 31.
Posted by Mark Alburger at 10:00 PM 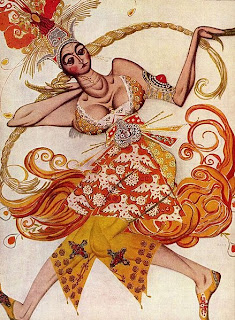