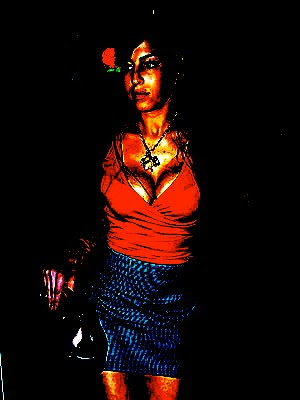 Death of Amy [Jade] Winehouse (b. 9/14/83, London, UK), at 27. London. "[She was] the British singer who found worldwide fame with a sassy, hip-hop-inflected take on retro soul, yet became a tabloid fixture as her problems with drugs and alcohol led to a strikingly public career collapse. "[A]lmost from the moment she arrived on the international pop scene in early 2007, Ms. Winehouse appeared to flirt with self-destruction. She sang of an alcohol-soaked demimonde in songs like Rehab -- whose refrain, 'They tried to make me go to rehab/I said, ‘No, no, no,’ ' crystallized Ms. Winehouse’s persona -- and before long it seemed to spill over into her personal life and fuel lurid headlines. The interplay between Ms. Winehouse’s life and art made her one of the most fascinating figures in pop music since Kurt Cobain, whose demise in 1994 -- also at age 27 -- was preceded by drug abuse and a frustration with fame as something that could never be escaped. Yet in time, the notoriety from Ms. Winehouse’s various drug arrests, public meltdowns and ruined concerts overshadowed her talent as a musician, and her career never recovered. . . . [A]s the news of Ms. Winehouse’s death spread, many . . . took to Twitter with deep sadness but no surprise. . . . Winehouse’s most recent comeback attempt faltered badly. Last month, she canceled a European tour after a performance in Belgrade on the first night, during which she appeared to be too intoxicated to perform properly" [Ben Sisario, The New York Times, 7/23/11].

Festival of International Laureates. Eduard Schmieder's iPalpiti. Walt Disney Concert Hall, Los Angeles, CA. "Schmieder began and ended with pieces by young composers who later rejected the works. The opener was Benjamin Britten’s Young Apollo, an odd but cheerful eight-minute fanfare for piano, string quartet and string orchestra written in 1939. The closer was the two movements of a student string quartet that Rachmaninoff never finished but later in life revived by orchestrating for strings as Romance and Scherzo. The Britten is worth the bother. The 26-year-old composer, a pacifist who had fled England, was newly arrived in the U.S. He wrote the fanfare on commission from the Canadian Broadcasting Corp. His inspiration was Keats’ Hyperion, with its 'new dazzling Sun-god, quivering with radiant vitality.' Britten played the brilliant piano part at the premiere in Toronto. But without explanation, he withdrew the piece and it was only revived in 1979, three years after his death. . . . [In this concert,] it quivered with radiant vitality anew. Svetlana Smolina, an outstanding Russian pianist with a luxuriant tone, was the evening’s underused soloist. Her piano was placed behind the orchestra, and she didn’t stand out quite as much as she might have. Still she caught both the flicker of the young Sun-god and also found urgency in the flashy solo part. Smolina was then the harpsichordist in the next piece, a Concerto Grosso for string quartet and string orchestra by Avner Dorman. Written in 2003 when the Israeli composer was 28, this is a piece that Dorman, who has become hot lately, may, himself, think about withdrawing. It is an update of Handel and Vivaldi, something that was already tired a decade or two ago. But the players sawed away with verve and the score went down easily. Different members of the ensemble formed the solo string quartets in the Britten and the Dorman. There wasn’t a weak player to be heard all evening. A controversial arrangement of the slow first movement of Mahler’s unfinished 10th Symphony by a German composer and conductor, Hans Stadlmair, was the most significant piece on the program. Here, a great dying composer enters new ethereal realms while simultaneously struggling with his deepest despair. The Adagio is one of music’s most profound depictions of the ineffable thin thread that separates life and death. Stadlmair reduced Mahler’s large orchestra to 15 strings, in a version that Gidon Kremer recorded with his Kremerata Baltica a decade ago. Schmieder has raised the ante slightly to 23 strings, which still means that without the weight of a full orchestra, Mahlerian ecstasy and anguish are both moderated. On the other hand, there is something very moving about intimately confronting Mahler’s beatific and tortured last thoughts with only a few strings. Schmieder’s approach was very much in the direction of chamber music. With sweeping and expressive arm gestures, he led an even-handed and slightly otherworldly account of the Adagio, more on the side of Mahler’s angels than his devils. The intonation and balances were beautiful. . . . The Romance and Scherzo proved an unnecessary curiosity, though. The teenager who wrote these two movements was not yet Rachmaninoff, although the intimations of his harmonic fingerprints could be detected. A week earlier in Beverly Hills, Schmieder gave the U.S. premiere of Kareem Roustom’s Three Klezmer Dances for violin, tambourine and strings, and he repeated it in a shortened version as an encore Saturday. No one knows where the Middle East is headed. But here was hope. A composer from Syria has made lovingly fanciful arrangements of Jewish music. The violin soloist, Daniel Turcina -- stepping out from an orchestra made up of Jews, Christians and Muslims from 19 countries -- is Slovakian. He played with improvisatory sounding fire and soul" [Mark Swed, Los Angeles Times, 7/24/11].

Summergarden: New Juilliard Ensemble. Abby Aldrich Rockefeller Sculpture Garden of the Museum of Modern Art, New York, NY. "New Juilliard Ensemble offered a concise overview of contemporary quartet composition that touched on several contrasting approaches: among them the painterly, the emotional, the dramatic and the abstract. In Barefoot Boy! (2004), Jiri Kaderabek captures a peculiarly evocative image from Humility, a poem by the early-20th-century Czech poet Jiri Wolker . . . . Kaderabek’s arsenal includes a slow opening unison figure that sounds vaguely folkloric; then the individual instruments peel off to investigate separate rhythmic and harmonic worlds. The interplay is striking, and toward the end of the score, a variant of the folk theme -- a bit eerier this time -- is restored. The Figure (2007), Judith Lang Zaimont’s quartet, is concerned with the way a musical line -- the 'figure' of the title -- can waft through a work, sometimes varied, sometimes without variation but with different character and coloration. The figure itself, graceful and consonant, is inviting enough to sustain this kind of exploration, and Ms. Zaimont makes the most of it: in relatively quick succession she takes her theme through driven, rhythmically involved, darkly introspective and sweetly lyrical episodes, often weaving textures around it that are more fascinating than the figure itself. Carson Cooman is drawn toward sophisticated pictorialism. The titles of his Four Aphoristic Inventions (2003) -- 'Disparate Conversation,' 'Mountain Climber (Unyielding Peak),' 'Wishing Well,' and 'Guillotine' -- accurately describe the music, but Mr. Cooman avoids predictable effects. “Mountain Climber,” for example, has the cello trying to surmount the harsh, aggressively sawed wall of sound that the other three instruments produce, and though 'Guillotine' ends with the expected sharp cutoff, the music leading to it is fresh and appealing, and the final gesture is more subtle than its predecessor in Berlioz’s Symphonie Fantastique. Mr. Cooman was also represented by his melancholy Tombeau-Aria (2003) and by Estampie (2008), a vigorous, glancingly neo-medieval violin duet. The expert quartet -- David Fulmer and Rebekah Durham, violinists; Jennifer Chang, violist; and Avery Waite, cellist -- closed the program with a high-energy reading of Louis Andriessen’s bebop-inspired Facing Death (1990). This is an unabashedly jazzy piece, both melodically and rhythmically: death, presumably, is to be faced with a certain swagger and vitality. The players kept that essential quality in focus, even as Mr. Andriessen’s themes ventured into increasingly dense harmonic territory" [Allan Kozinn, The New York Times, 7/25/11].
Posted by Mark Alburger at 8:00 PM