The Compleat Crumb: Beyond / Mark Alburger 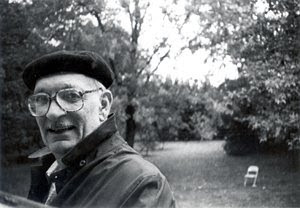 Bridge Records is ongoing with their heroic Complete Crumb Edition.

Here's what they're up against (George Crumb's output to date, over an almost Elliot Carteresque stretch of six decades)...

...and here's how they're doing, with comments on selected 1970 work and beyond, concluding a discussion begun in the June 2005 issue. 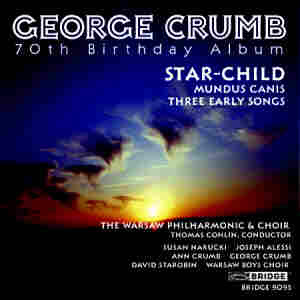 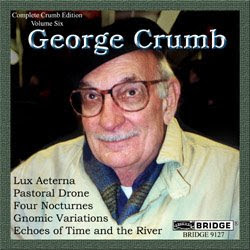 Madrigals, Book I (1965), for soprano, vibraphone, and double bass 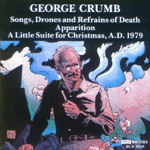 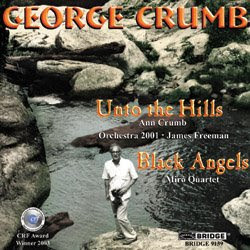 Up against classic recordings of Black Angels by such quartets as the New York and Kronos,
the Miro holds its own in a dangerous and energetic reading among the best.
Lux Aeterna (1971) for soprano, bass flute/soprano recorder, sitar, and percussion (two players) 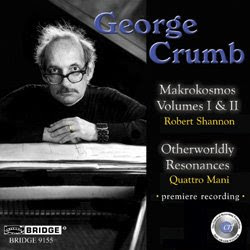 Makrokosmos, Volume I (1972), for amplified piano

Here, Robert Shannon is up against the premiere recordings by David Burge (Volume 1, Nonesuch) and Robert Miller (Volume 2, Columbia), as well as Laurie Hudicek's through-line on the works as found on the Furious Artisans label. Shannon provides the menace pianistically and vocally in thoughtful renditions that extend a tradition. 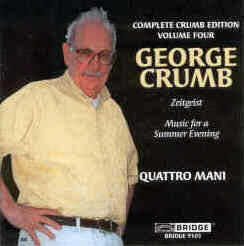 While second performances of works (let alone second and third recordings, etc.) have been few and far between for some composers, such has not been the case for Crumb, as we now again find ourselves comparing a Complete Works recording to an older record/CD, in this case the Kalish-Freeman-DesRoches-Fitz Music for a Summer Evening to the current Grace-Ryback-Kinzie-Colson take. And again, while comparisons are odious, they are respectable here, with the requisite mystery and shock as required.
Dream Sequence (Images II) (1976), for violin, cello, piano, percussion (one player), and off-stage glass harmonica (two players)

With this Bridge Records release, Star-Child receives its premiere recording (surprisingly untouted as such) and sounds every bit as overwhelming as it did in live concerts in New York and Philadelphia back in 1977.
Apparition (1979), for soprano and amplified piano

The stark surreal simplicity of Apparation is still apparent in this re-issue from Bridge 9006,
Recorded in Octor 1982, at the Holy Trinity Episcopal Church, New York, NY (a disc that also included songs of Charles Ives). Crumb's first English setting in many a year, after many Spanish (Federico Garcia Lorca) ones, the music remains an ear-opener, giving texts by Walt Whiman a decidedly Iberian echoic flare. 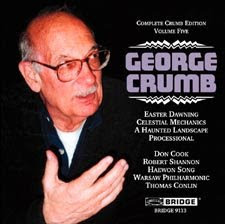 This performance of Celestial Mechanics marks a fifth recorded release of the work, and surprisingly unacknowledged on the official George Crumb website (georgecrumb.net). With this piece, the composer seems to have arrived with all of the stylistic traits well in place that would mark his output in the next two decades, argued ably by dueting pianists Song and Shannon.

Related to Apparition, this is again a Bridge re-release from 1982 (in this case
from August of that year, recorded at Bradley Hills Church, Bethesda, MD, paired with Richard Wernick's Sonata for Piano ["Reflections of a Dark Light"]). Not surprisingly, not exactly traditional Christmas music, but Orkis has the traditional Crumb modi operandi well in hand.
Gnomic Variations (1981)

Perhaps the most surprising aspect of Processional is its limiting itself to the piano keyboard itself, after so many years of Crumb's "inside the piano work." As such, it almost comes off as an early work, and the composer should be applauded for at least exploring a new (albeit old) angle, as well delivered by Shannon here in the composition's sixth (and again unaknowledged on the official website) recording.
A Haunted Landscape (1984)

By this point, one has the sense that the official George Crumb website has not been updated in quite some time, as this the second recording of A Haunted Landscape is again unaknowledged. It should be, as this performance by The Warsaw Philharmonic, under Thomas Conlin, is a fine one in the path set by the premiere rendition of the New York Philharmonic Orchestra, conducted by Arthur Weisberg (New World Records, paired with William Schuman's Three Colloquies for Horn and Orchestra). Crumb's first orchestral work since Star-Child and first exclusively large-scale-instrumental after Echoes of Time and the River, this is on a decidedly smaller scale that still manifests a bit of Edgar Varesian and post-tonal-Igor-Stravinskian brusquerie, and even hints of Gyorgy Ligetian clusterie.
The Sleeper (1984), for soprano and piano

Federico's Little Songs for Children is right on up there on the list of who-exactly-are-we-marketing-this-to pieces with A Little Suite for Christmas. Again, unsurprisingly, this is decidedly not kid stuff, but echoes of quintessential Crumb in a delightful premiere recording of a work, by now also recorded with the Jubal Trio on CRI (a disc also featuring Don Freund's Backyard Songs, Harvey Sollberger's
Life Study, Tania Leon's Journey, and theEric Stokes [is it a song cycle?] Song Circle).
An Idyll for the Misbegotten (Images III) (1986), for amplified flute and percussion (three players)

Zeitgeist (Tableaux Vivants) has all its tricks in place, turned sprightly by duo pianists Susan Grace and Ann Ryback, in this its second recording, first laid to electronic replay on Mode Records by the Degenhardt-Kent Duo, simply billed as Six Tableaux embedded with Makrokosmos IV and Earle Brown's Corroboree.

Since premiere and second recordings can be so hard to obtain for some composers, we get both here (not yet on the crumbsite), with Don Cook's carillonning bookending the Complete Works, Volume 5. While the second performance is more leisured (or simply has more silence at the front end) and the first checks in as longer (or merely mostly prolonged resonance at the conclusion -- booklet durations of 4:06 and 4:07 are in reality 4:17 and 4:o7), the realizations are remarkably similar, which the current writer will demonstrate on June 5, 2008, as part of his Genre Implosions No. 2 ("Alphabetic Homage") (markalburgerworks.blogspot.com).
Quest (1994), for guitar, soprano saxophone, harp, double bass, and percussion (two players)

In Quest, we come to Crumb's first use of guitar since Songs, Drones, and Refrains of Death and apparently first use of acoustic apparently ever, the instrument in the earlier being electric, and for guitarist/record-producer David Starobin this work may be the touchstone of the entire Crumb project, being the guitarist's first Crumb commision and placed on the second album, appropriately acknowledged as a premiere release (tellingly, Songs, Drones is the first selection on the first album). Starobin, no stranger to the music, having played all of Crumb's plucked string repertory at some point thus far (banjo for Night of the Four Moon, mandolin on Ancient Voices of Children, and sitar in Lux Aeterna), gives us -- how can we say elsewise -- the definitive performance, with both familiar and novel contributions from saxophone, harp, percussion, and string bass --
which has by now been re-released as part of Starobin's Guitar Concertante, with Poul Ruders's Psalmodies and John Anthony Lennon's Zingari. Like A Little Suite for Christmas, this music features a very familar quotation (in this case Amazing Grace)... far better known to a general public than most previous found musics, seemingly pointing Crumb toward his recent interests in folk-song settings.

Mundis Canis becomes an "in-house" project, not only with respect to subject matter (the Crumb family's pet dogs over several decades), but in terms of performance, with Starobin and the composer going it alone, and Crumb's first major performance (percussion here and piano in Three Early Songs on the same album) of his own work (discounting the unaknowledged Crumbian groans heard in the Myth movement of the Kalish-Freeman-DesRoches-Fitz Music for a Summer Evening). What can we say? Crumb and Starobin own the piece, in what remains its sole recording, exemplifying at times the humorous side of the composer often experienced in life but more rarely in the recordings. The Yoda movement is downright hilarious, whether live or in the studio.
2000

By the single-movement piano-duet Otherworldly Resonances, Susan Grace and Alice Rhybak effectively demonstrate that Crumb quite obviously has a style definitively his own, and of a certain consistency over the decades that seems downright classical. Yet paradoxicaly at least one new element will jump to the fore soon after this reliably-standard take.
Unto the Hills (American Songbook I) (2002), for soprano, percussion quartet and piano

The new recent direction of George Crumb -- as heard in this excellent premiere recording by soprano Ann Crumb and Orchestra 2001, conducted by James Freeman -- is taking those found-music quotes of the earlier works and moving them to the foreground in Unto The Hills (American Songbook I). With Ann's beautiful vernacular singing of known songs, the settings almost come off as a parody of Crumb. Almost, but not quite, as the composer still manages to bring amazing mystery to what once was safely familiar. In some surprising analog to Philip Glass's varied use of various world musics, there is something so elemental about what both composers do (in their markedly distinct ways, of course) that other inspirations can be incorporated with ease. And as to the present recording and the previous ones, we look for more wonders in this impressive undertaking from Bridge Records.
Eine Kleine Mitternachtmusik (A Little Midnight Music) (2002)

A Journey Beyond Time (American Songbook II) (2003), for soprano, percussion quartet and piano