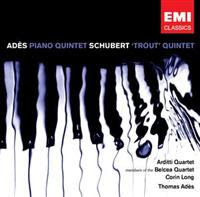 Thomas Ades. Piano Quintet (2001). Arditti Quartet, with the composer at the piano. EMI Classics. "Thomas Adès . . . is an excellent conductor in a wide range of repertory. Esa-Pekka Salonen recently told me that during a meeting last year with his fellow conductor Simon Rattle, Sir Simon observed, 'You know, Esa-Pekka, it's a good thing for us that Tom decided to become a composer.' . . . You can't help hearing resonances of Classicism in the new work. . . . Mr. Adès's one-movement, 20-minute quintet is structured in a surprisingly strict sonata form. All the main themes are essentially tonal and hauntingly evocative of the Classical tradition. But once stated, the themes are subjected to harmonically radical manipulations. The work begins with a repetitive riff for solo violin, like some fractured remnant of a Schubert chamber piece. As the other strings pick it up in staggered sequence, the focus is fascinatingly thrown off. The piano enters as if from another piece, playing a sweetly tonal theme that gets stuck in its own repetitive riff. If you get a sense of different things happening simultaneously in different time signatures and different keys, this is sometimes exactly the case. The development section builds with typically Adèsian wildness until the mood suddenly shifts, and the music turns delicate, with soothing choralelike themes in the piano and softly questioning strings. When restated in the frenetic recapitulation, the main themes are almost unrecognizably transformed. The performance is mesmerizing" [Anthony Tomassini, The New York Times, 6/12/05].

Poul Ruders. Piano Sonata No. 2. Thomas Ades. Bridge. "Adès's stunning performance of the formidable Piano Sonata No. 2 [was] recorded live at the Aldeburgh Festival in England in 2001" [Anthony Tomassini, The New York Times, 6/12/05].

Carl Ruggles. The Uncovered Ruggles. New World Records. "Born in 1876 to a whaling family on Cape Cod, Ruggles pursued music, in the words of Virgil Thomson, 'without qualms about failure, poverty, disapproval, or what-will-people-say.' If Ruggles is underappreciated today, it's partly his own fault. Completing compositions went against his grain. He left most scores in sketchy disarray, published only eight works and spent his last decades more involved with painting than with music (He died at 95). For all his stubbornness, Ruggles often caved in and turned to pragmatic musicians to help him put his fragmentary scores into some sort of performable shape. One he frequently sought for such aid was the pianist and editor John Kirkpatrick, who was also a devoted colleague of Ives. An engrossing new recording . . . -- featuring the excellent pianist Donald Berman -- should contribute significantly to the understanding of this composer. Mr. Berman, a musician with a scholarly bent who studied with Kirkpatrick, won critical acclaim for two earlier recordings, both called The Unknown Ives (from Composers Recordings and New World). They presented premiere recordings of unpublished works and new critical editions of Ives. The Ruggles release also offers several first recordings of unpublished sketches, mostly transcribed or realized by Kirkpatrick, who likened the process of assembling scores from Ruggles's fragments and sketches to 'stringing pearls.' Mr. Berman gives searching and authoritative accounts of 10 solo works. He also accompanies the soprano Susan Narucki in four restless songs and the violinist Daniel Stepner in a volatile piece titled Mood. Ruggles's musical upbringing was unconventional: he learned as much from playing violin in theater orchestras during his teens as from studying composition at Harvard. He emerged with a wildly distinctive voice: aggressively modern, highly chromatic, densely polyphonic, indebted to the early atonal aesthetic of Schoenberg. As the noted English critic Wilfrid Mellers once wrote, Ruggles, in his craggy music, sought freedom from 'tonal bondage ... from conventionalized repetitions, from anything that sullied the immediacy and purity of existence -- even more remorselessly than Schoenberg.' The piano works offered here, especially the astounding Evocations: Four Chants for Piano, mostly evolve in long spans of organic, heaving, intertwining contrapuntal lines. The pervasively somber mood is sometimes relieved by a touch of wistfulness or delicacy. Avoiding overt drama, the music grabs you with its inexorable sweep and mystical fervor. But don't expect to hear a steady rhythmic tread in March or an oom-pah-pah in Valse Lente. The songs are utterly strange yet strangely haunting. It's good that Mr. Berman included Exaltation, a melancholic but sweetly tonal hymn. Ruggles composed it in 1958 in tribute to his beloved wife, Charlotte, who had died the year before. Charlotte had long asked Ruggles to compose a hymn for her. Did this rugged New Englander have a secret soft spot?" [Anthony Tommasini, The New York Times, 6/19/05].
Posted by Mark Alburger at 4:58 PM