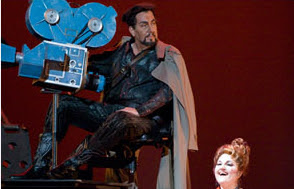 "Opera in two acts . . . by Igor Stravinsky," San Francisco Opera proudly announces in the program booklet to Robert Lepage's intriguing production of The Rake's Progress (November 23 through December 9), but it is a lie.

Check any recording or the Boosey & Hawkes published score and you will read "an opera in three acts." Does this matter? Sure. But opera is, from a certain perspective, all about artifice, and Stravinsky, for one, holds up certain values of classical art to neoclassic revisionism. So why not go one step further and revise the revision?

This is pretty much what Lepage does, in re-imagining "The Rake" as a pseudo-Western fable for our times, transposing most of the scenes to what could be all-Californian venues, from the oil-rig-plains-and-mountains opener (Texas? Kern County?), to brothel (OK, legally, only Nevada), to on-location-trailer, to decaying casino (again Nevada, but perhaps a local Indian spot).

And, as alarming as it is to have Tom Rakewell (William Burden) in a cowboy hat, Father Truelove (Kevin Langan) in a bolo tie, Anne Trulove (Laura Aikin) as a slim-fast Dolly Parton, and Nick Shadow (James Morris) emerging oilily from an underground drill-hole, the staging and settings pretty much all work, and following several viewings of the by-now-in-and-of-themselves classic sets of David Hockney, this is an impressive feat all by itself.

Certainly the excellent singing and acting helped this process along both with the major and minor characters, including voluptuous Catherine Cook (Mother Goose), athletic Denyce Graves (Baba the Turk), and comic Steven Cole (Sellem). The brothel scene (one of only two of the William Hogarth "Rake's Progress" panels to actually make it into W.H. Auden and Chester Kallman's libretto for Stravinsky) was staged as a Hollywood neo-Western saloon set, with Morris's genial and menacing tones above all, as cameraman on a boom, filming all the proceedings. The chorus excelled under Chorus Director Ian Robertson and Music Director Donald Runnicles, as Roaring Boys and Whores, later to return as spectators and asylum residents. A giant red heart-shaped bed became a Georgia O'Keefe portal into sunken revelric bliss, as Burden's glorious voice disappeared in mounting the madam. Lanterloo.

Aikin's Scene 3 cabaletta was in lithe counterpoint to the visual perspective joke of giant moon and little dollhouse on the prairie, again a perfect image of old-time rural California loneliness. The inflatable trailer gag for what is really the beginning of Act II found Burden portraying the bottom of his fate in top voice.

Conflations of images made for a phantasmagorical world where Hollywood and London collided with English-style sedans (making for a nice verbal play in the script) and bobby-policeman with an all-American theater marquee-opening.

Rakewell in this production is clearly not only rich, but famous, with his elevated Malibu swimming pool above the distant ocean, a pool which serves double duty as repository for all of Baba's treasures and, temporarily, Baba (as a sort of zombie Esther Williams) herself. While artificial respiration is not called for in the text, this again somehow worked, as Cole's Sellem held forth as a con-man / game-show-host bringing to mind the character Tattoo from "Fantasy Island."

1950's television-console-as-bread-making-machine was another brilliant move on the director's part, and brought back as an item of furniture in Bedlam even more so.

Stravinsky's pace in "The Rake" was as extended as he ever allowed himself, at times over-leisurely and over-artificed, yet, in this production, to parody Nick's comments back in Scene 2, time was ours, as the music and drama moved along blissfully. The boneyard / abandoned gambling den (technically the beginning of the non-existent Act III) was figuratively and literally electrifying -- all the neon came back on at Nick's smoky demise "in ice and flame," with Morris summing up an absolutely commanding performance; the madhouse scene was as poignant as this reviewer has ever had the pleasure of hearing; and the final comic Epilogue a pure romp.

Where were the lies and where was the truth? Everywhere. All night long. Just beware those idle hands, folks....
Posted by Mark Alburger at 10:00 PM