To Thine Own Self Be Musical / Phillip George 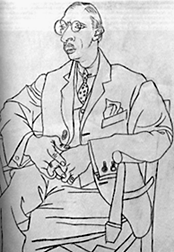 In a world increasingly fraught with the artifice of movies and the unrealities of reality TV, sometimes it still pays to be true to oneself.

As a composer and writer, I need to be reminded of this; and perhaps someone should have cautioned Igor Stravinsky way back when. His four-movement Divertimento (1945) from The Fairy's Kiss (1928), an homage to Peter Ilyich Tchaikovsky, has all the rhythmic sprung-syncopatic energy of his idol and all of his own emotive, melodic grace.

Meaning not much of either; the lesser of probable musical worlds.

While Alasdair Neale and the Marin Symphony did their best, on January 20 at Marin Center, to energize this mildly interesting sidebar in the great composer's career, this is pretty much a musical dog that won't hunt out much sustained interest from a mainstream audience.

By contrast, Stravinsky's Symphony in Three Movements, completed the same latter year, has much of the crackling vitality more typically associated with the composer. In some ways a conscious harkening back to the landmark Rite of Spring of 1913, this music is filled with the elliptical logic and non-sequiturs of the Russian expat's unique musical mind. Neale and company brought out the paradoxes and twistedness of the score, with ensemble and tempo considerations usually well in hand.

While all three movements of the above had connections with various cinematic sources, and The Fairy's Kiss was a non-pictorial approach to an intriguing, if traditionally told, balletic tale, it was the Tchaikovsky that followed that drew the strongest musical depictions.

This was no doubt in part due to the dynamic Vadim Gluzman, who served as spectacular soloist in the Concerto for Violin in D Major. This young Russian-Israeli wunderkind, born in 1973, danced and emoted his way through Tchaikovsky's violinistic masterwork, with technique and tone to burn, belying any notion of "unplayableness" that had dogged the composer in the year of its incandescent creation (1878). The orchestra responded in kind, breathlessly keeping up with a passion and vibrancy that gave everyone a run for their money -- a sincere reading of an honest work of the heart. Then again, Gluzman's well-deserved encore was a dizzingly fake, exciting amalgam of J.S. Bach's Phorian and the ominous death-chant Dies Irae (the apocalyptic Day of Wrath).

Guess "To Thine Own Self Be False" still works, too.
Posted by Mark Alburger at 10:00 PM