The Dill of Montalvo / Brian Holmes 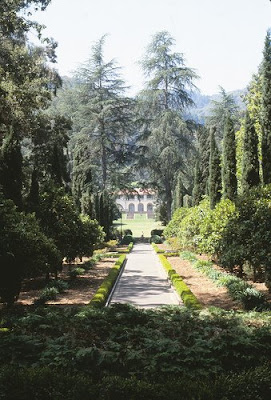 The composer should get top billing in an opera. But Divide Light isn't actually an opera, and Leslie Dill is by no means a composer. She is a performance artist who has made a career of creating paper sculptures and photographs with words on them, often the words of Emily Dickinson. A residency at Villa Montalvo gave her the chance to fashion her non-opera, using 20 poems of Emily Dickinson as the libretto. The title comes from the poem:

Banish Air from Air -
Divide Light if you dare -
They'll meet
While Cubes in a Drop
Or Pellets of Shape
Fit
Films cannot annul
Odors return whole
Force Flame
And with a Blonde push
Over your impotence
Flits Steam.

The show was sold out for its single performance. What we heard and saw included three singers, a chorus, a string quartet, and seven actors. Projections of words and images filled a screen at the back of the stage. The stage was outdoors, allowing a secondary chorus of crickets to make a charming contribution.

Why wasn't it an opera? The singers were not characters, and their actions were not a story. Also, the chorus wasn't a bunch of dragoons, jolly villagers, or flower maidens.

So what was it, if not an opera? Mostly a fashion show oratorio, inspired by Emily Dickinson's poetry, and animated by post-minimalist music. Leslie Dill designed the vivid costumes, which displayed words from the libretto. The singers and the string quartet players wore black and white, either large black letters on white cloth, or large white letters (shining like the bones of a skeleton) on black. The actors, who never spoke (though one sang briefly) were decorated more colorfully. Some costumes contained panels that unrolled to display important words. One dress, though black and white, concealed long ribbons. The first ribbon, seemingly drawn from the heart of the actress who wore it, was blood red. Another dress bore letters on its side panels; only when the actress spun did the panels open enough for us to read the word, beauty.

The words, both sung and seen, were gathered in three segments, with the pattern intended to follow the progress of the human soul. As the singers sang, they moved about the stage, often gesticulating earnestly, though it cannot be said that they did any acting. Meanwhile, the screen displayed words and images related to the poems. Sometimes the letters of the words drifted hither and yon, as wayward as Little Bo-Peep's sheep, but even when they didn't, they could not be depended on to help us understand what the singers were singing.

I would have preferred supertitles. The singers, soprano Jennifer Goltz, mezzo Kathleen Moss, and baritone Andrew Eisenmann, sang expressively and with commitment. Goltz, whose demanding part sometimes featured acrobatics on high notes, was particularly impressive. But it was rarely possible to understand more than half the words. Nor was the skillful chorus, The Choral Project under Daniel Hughes, any easier to follow. Alas! An evening with Emily Dickinson is an evening wasted if you can't follow the words. Much of her verse is hard enough to parse even when audible and visible. As evidence, I offer the poem quoted above, a remarkably opaque treatment of light.

The composer, unfamiliar to me, was Richard Marriott. (One of the choristers told me that he undertook this project after another composer dropped out.) He founded the Club Foot Orchestra, which specializes in accompanying silent films. He used to compose for Atari, a credit the program notes omitted. His music had several styles. Sometimes it developed over short ostinato figures; sometimes the melodies unfolded with aching slowness over drones; sometimes the music was cluttered and active like gamelan music. The chorus sat on opposite sides of the stage, flanking the screen. The effective choral writing was mostly chordal, but except for several passages involving interlocking ostinato figures, it was not memorable.

The most engaging part of the music was the Del Sol String Quartet. On stage and in costume, these players were often more entertaining than the singers. Two of the numbers called for a string soloist to move around the stage, interacting with the singers or actors. Another number required them to speak or shout various words as they performed. Their music, sometimes simple and sometimes complex, was always effective and well executed.

The sound system? Boo, hiss! Everyone was on a microphone. So when someone sang, you heard her voice emerge from a speaker some distance above her head and off to the side, not from her throat. The occasional low frequency feedback did not adequately compensate for the shrill distortion of the amplified sound. The added reverberation did not suit the outdoor venue: the crickets sang fine without it.

Only at the end, with all the musical forces joining together, and with four of the vividly costumed actors on display, was the effect grippingly theatrical. Too late! Though the evening offered much evidence of the commitment of the performers and creators involved, the elusive central figure, Emily Dickinson, the belle of Amherst, had already hid her face and fled from view.
Posted by Mark Alburger at 9:00 PM