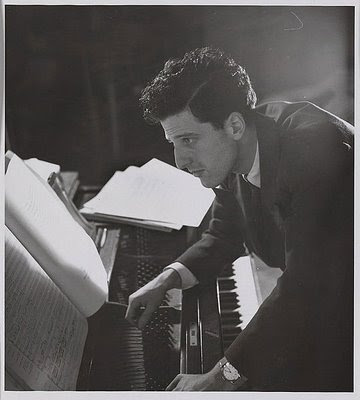 Lukas Foss (b. Lukas Fuchs, August 15, 1922, Berlin, German - February 1, 2009, New York, NY) studied with Julius Goldstein-Herford. After the rise of Nazism, he and his family moved to Paris in 1933, where he studied piano with Lazare Lévy, composition with Noël Gallon, orchestration with Felix Wolfes, and flute with Louis Moyse. In 1937, he moved to the U.S., changing his name to Lukas Foss, and studying at the Curtis Institute, with Isabelle Vengerova (piano), Rosario Scalero (composition,) and Fritz Reiner (conducting).

Foss also studied with Sergei Koussevitzky during the summers from 1939 to 1943 at the Berkshire Music Center (now known as the Tanglewood Music Center) and, as a special student, composition with Paul Hindemith at Yale University from 1939 to 1940.

He became an American citizen in 1942.

The Jumping Frog of Calaveras County
(Libretto by Jean Karsavina, after Mark Twain) (1950)

Foss was appointed Professor of Music at the University of California, Los Angeles in 1953, replacing Arnold Schoenberg, and founding the Improvisation Chamber Ensemble.

He founded the Center for Creative and Performing Arts in 1963 while at the University at Buffalo. From 1963 to 1970, he was Music Director of the Buffalo Philharmonic Orchestra.

Baroque Variations (1967)
I. On a Handel Larghetto
II. On a Scarlatti Sonata
III. On a Bach prelude "Phorion"

Thirteen Ways of Looking at a Blackbird (1978)

From 1981 to 1986, Foss was conductor of the Milwaukee Symphony Orchestra.

He was a Professor of Music, Theory, and Composition at Boston University beginning in 1991.
Posted by Mark Alburger at 10:00 PM