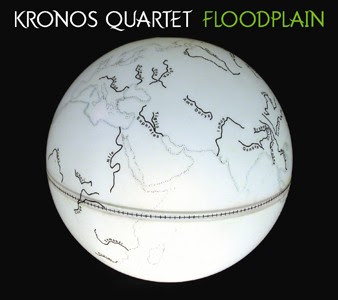 Kronos Quartet. Floodplain. Nonesuch. "It can be tempting to think that there are two different Kronos Quartets: the admired ensemble founded by the violinist David Harrington in 1973 to champion contemporary works by composers like George Crumb, Terry Riley and Steve Reich, and the polyglot band behind globe-trotting concept albums like Pieces of Africa and the Mexico City-inspired Nuevo. The truth is more complex. Mr. Crumb’s composition Black Angels, which sparked the group’s formation, turned the introverted quartet idiom outward through its extramusical effects and social concerns. Mr. Harrington and company have been extending that path ever since. On Floodplain, the Kronos Quartet takes up music associated with lands blessed with abundant water yet prone to devastation through flooding. Those in search of musical exotica will not be disappointed: the disc covers a range that includes seductive pop from Egypt (Midhat Assem’s Ya Habibi Ta’ala), a gorgeous Lebanese devotional hymn (Wa Habibi), electronica from Palestine (Ramallah Underground’s Tashweesh) and a nameless, haunting Iranian lullaby. The violist Hank Dutt has an especially lovely solo turn in the introductory alap from Ram Narayan’s Raga Mishra Bhairavi, and the quartet seamlessly melds with the Alim Qasimov Ensemble, an Azerbaijani troupe, in Getme, Getme. But the concept of a fragile natural balance also serves as a potent metaphor for cultures whose native arts have been shaped by migration and threatened by political and religious conflict. A recording engineered to sound like a tinny shortwave transmission makes the chattering machine-gun rhythms of Oh Mother, the Handsome Man Tortures Me, an anonymous Iraqi song arranged by the quartet and Ljova (Lev Zhurbin), sound still edgier. And in ... hold me, neighbor, in this storm ... the Serbian-born composer Aleksandra Vrebalov intermingles rustic, pious, intimate and bellicose themes in a gripping sequence, evoking a homeland sundered by ethnic wars" [Steve Smith, The New York Times, 5/29/09].

David Lang. The Little Match Girl Passion. Ars Nova Copenhagen, Theater of Voices, conducted by Paul Hillier. Harmonia Mundi. "[In] The Little Match Girl, by Hans Christian Andersen, . . . a shoeless child wanders through the snow trying unsuccessfully to sell matches, unable to return home because her father will beat her. Sitting under a Christmas tree and lighting a match, she has a vision of her dead grandmother, who gathers her up to heaven. She is found frozen to death the next morning, holding a handful of burned matches. Mr. Lang’s achievement is in yoking together opposites so thoroughly that they seem inextricable, even though, logically, they should hardly work together at all. His libretto, which he wrote himself, alternates among stripped-down, poetic imagery, prose description in grimy detail and fragments from Bach’s St. Matthew Passion. The score sounds simple and neo-medieval at first, but further listening reveals layers of harmonic and contrapuntal complexity. And the choir, singing with an icy, uninflected detachment, paints a deeply moving portrait of the girl within a harrowing landscape. The Little Match Girl Passion won the Pulitzer Prize for music in 2008. Four companion works, on texts from the Song of Songs, Ecclesiastes, the opening pages of Genesis and a Yiddish love song, are cut from similar cloth. Listeners familiar with Mr. Lang’s more obstreperous instrumental works may not recognize his style here (though a few more meditative ensemble pieces hint at it). But these choral settings, composed from 2001 to 2007, show that he has idiosyncratic but effective ideas about how to use voices" Allan Kozinn, The New York Times, 5/29/09].

Yehudi Wyner: Chiavi in Mano and Other Works. Robert Levin, pianist; Boston Symphony Orchestra, conducted by Robert Spano; other performers. Bridge. "In time for Yehudi Wyner’s 80th birthday, on [June 1], the Bridge label has released a splendid recording of four major works by this respected American composer, including his piano concerto Chiavi in Mano, awarded the 2006 Pulitzer Prize for music. A comprehensive musician, Mr. Wyner is an elegant pianist, a fine conductor, a prolific composer and a revered teacher. His works show a deep understanding of what sounds good and is technically efficient. His musical interests range widely. I have heard him discuss insightfully both Monteverdi’s approach to recitative and Frank Sinatra’s legato singing. All these qualities come together in the concerto, written during a stay at the American Academy in Rome in 2004. 'Chiavi in Mano,' a term used by car salesmen and real-estate brokers in Italy, translates as 'Keys in Hand.' This 19-minute, single-movement concerto is run through with American vernacular. Yet the overall language is distinctively modern. Mr. Wyner absorbed the idioms of 12-tone music without practicing the technique strictly. Chiavi in Mano was commissioned by the Boston Symphony Orchestra, a project instigated by the pianist Robert Levin. And this live recording from Boston in 2005, conducted by Robert Spano, is a knockout. Mr. Levin plays with fleet technique and rhapsodic freedom. The piece ends with an odd outburst of what seems pummeling honky-tonk, further evidence of Mr. Wyner’s free thinking. Susan Davenny Wyner, his wife, conducts three other searching works. She leads the Odense Symphony Orchestra of Denmark in Mr. Wyner’s 1994 cello concerto Prologue and Narrative (with Maximilian Hornung as soloist), a 25-minute piece rich in ruminative lyricism and quick-changing moods, and in his Epilogue: In Memory of Jacob Druckman. She also leads the Festival Orchestra of Boston in a rapturous account of Mr. Wyner’s Lyric Harmony. [Anthony Tommasini, The New York Times, 5/29/09].
Posted by Mark Alburger at 7:00 PM