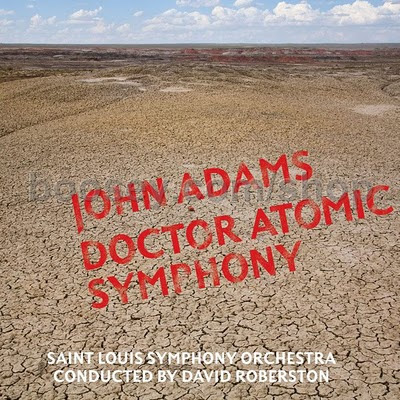 Sometimes the weight of history can be oppressive. What can be done that hasn't already been done? Well, in science, in the 20th- and 21st-centuries, the answers have been easy (if also quite hard). How about the atom bomb? How about computers? And on and on. So it's nice to see and hear sometimes in the classical music realm, the young (comparatively speaking) ones trumping the old (in this case, living composers vs. the dead).

That's the way it went with the St. Louis Symphony, under the direction of the relatively young (b. 1958) David Robertson, on April 17 at Davies Hall, where renowned Berkeley composer John Adams (OK, maybe not so young - b. 1947) had at it with his explosive Dr. Atomic Symphony: a symphonic implosion of his 2005 opera, premiered just across the street that year at the War Memorial. Adams's symphony -- first given in 2007 by the BBC Orchestra, with its American premiere the next year under Robertson and the St. Louis -- is arresting and taut, arguably an even more cogent argument of ideas than in the somewhat discursive dramatic form. From the downbeat of the first of three movements, entitled The Laboratory, the music is a hair-raising event, pummeling like a minimalist Edgar Varese (an acknowledged influence), and oh-so-Joh-Adams throughout, in tricky crossrhythms and colorful orchestrations.

Panic kept the the energy up, and the concluding Trinity, includes the accoladed John Donne "Batter My Heart" section, now given, mostly successfully, to trumpet, with quizzical doublings on clarinet and oboe. If this music comes a bit late in the overall proceedings, Adams redeems once more in resounding energetic punches to a convincing finale.

So listeners were battered, but in a good way. A cathartic way. The rest of the program was a preparation, much of it apparently muted, at least from our back box seats. Sergei Prokofiev's Violin Concerto No. 2 emphasizes a restrained atmosphere, in its light scoring for double winds (minus trombones and tuba), two percussionists, and strings. Soloist Gil Shaham played his heart out, in a dedicated performance that featured close interaction with the ensemble. Yet, it all seemed in a box, at least from our distance -- and, at times, uncharacteristically "un-Prokofievian" (a composer, rather than performer, issue).

This brings up the notion of "voice." We all take it for granted that we have our own voices as people. But, as composers, the development of a characteristic voice is not to be taken lightly. The fact that many isolated passages of Prokofiev sound instantantly as this composer (and not, say, his slightly older and younger contemporaries Igor Stravinsky and Dmitri Shostakovich) is quite a remarkable matter, hinging as it is on melodic, orchestrational, and harmonic touches that in many ways are simply felt rather than clearly apprehended or articulated.

Jan Sibelius is another case in point, heard here in his Symphony No. 7, which the composer himself was not even sure was a symphony, having originally titled it Fantasia symphonica. Maybe he was right, but nonetheless, every measure rung as true to this composer, if again, muted.

The program opened with Rapture, a pleasant and colorful enough work by Christopher Rouse, who is two years younger than Adams. Well, then again, the weight of history can be oppressive, as noted.
Posted by Mark Alburger at 9:00 PM