A Tradition of Change / Mark Alburger 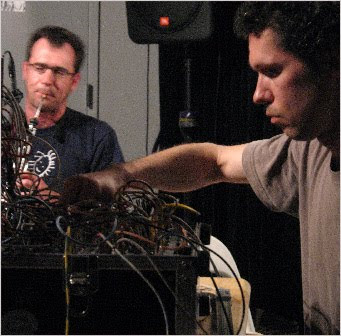 It's hard to believe that electroacoustic music has been around for more than 60 years. Dating back at least to 1948 with Pierre Schaeffer's first tape compositions (a style dubbed Musique Concrete), the genre flourishes in many contexts. One such is chamber music of a live acoustic soloist in consort with electronically generated sounds, and it was this type of concert that was presented, with resounding success, on July 16, by sfSound at Community Music Center.

The featured group was EKG, the duo of oboist / English hornist Kyle Bruckmann and analog electronician Ernst Karel, heard in two works: Christopher Burns's The Mutiny of Rivers (2010) and Morton Feldman's Oboe and Orchestra (1976). The former was an improvisational tour-de-force, where English hornist Bruckman was given 13 unordered large sheets of music (some notational, some instructional) against 6 streams of electronics, from which Karel could sample and further alter before making audible. The result was a fevered thrill ride down a sonic cascade.

The Feldman was just about the opposite, as expected. Known for his extended, meditative, tangentially-minimalist soundscapes, Feldman offers here about 20 minutes of plaintive, plangent, lonely motives -- fairly engaging, but a little difficult to fully assess in this realization. In truth, the piece probably should have been redubbed "Oboe and Electronics, by EKG, after Morton Feldman," as the electronic score, intriguing as it was, bore little resemblance to what Feldman's intentions may have been vis a vis an orchestra.

Burns cited in his program notes the influence and inspiration of Luigi Nono, and we were treated to the underplayed Italian master's ...sofferte onde serene... (1976), one of three "old-school" compositions featuring electronic sounds on electromagnetic tape. Here the sonorities of pianist Christopher Jones intentionally blended in with altered pianistic pingings on the pre-recording, as a dark, sonorous soundscape.

The sound world of Dennis Smalley's Clarinet Threads (1985), as brought to life by clarinetist Matt Ingalls, was considerably more, well, electrifying, in hair-raising high notes that commanded attention. The virtuosity in this performance, against a fixed electronic component, was impressive -- indeed the quality of the live performers throughout the evening was first rate.

And the excellence continued in cellist Monica Scott's realization of a Mario Davidovsky classic: Synchronisms No. 3 (1965). This, the oldest work on the program, was near ground zero of the whole live-soloist-and-electronics category, and had an almost nostalgic and pristine quality in its careful alteration of media. Scott brought technique and tone to the table, and the electronic score perked agreeably.

By contrast, while Per Bloland's Quintet (2005) was not quite the newest work on the program, it certainly pointed towards future directions. Saxophonist John Ingle became his own one-man band, with the assistance of an Apple laptop, in realizing five-part music in real time that animated and thrilled. The precise cut-offs alone were worth the price of admission (OK, I got in free as a critic, but still...), and bespoke of the excitement of the evening, taken in by an enthusiastic capacity crowd.
Posted by Mark Alburger at 9:00 PM