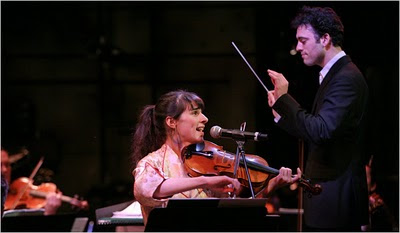 The Knights present the premiere of Yotam Haber's New Ghetto Music. Baryshnikov Arts Center, New York, NY. "During a 2008 residency at the American Academy in Rome, Mr. Haber uncovered a cache of tapes featuring Roman Jewish cantors recorded from the 1940's to the 60's. For New Ghetto Music he drew on the penetrating emotional delivery he heard on the tapes, combining it with modern orchestral techniques and a bracing rawness inspired by tenores vocal traditions from Sardinia. Featured in Mr. Haber’s piece was Christina Courtin, a Knights violinist and an admired indie-pop singer and songwriter, who sang her own lyrics and those of Barbara Ras, a contemporary poet. Ms. Courtin loosed her plaintive, affecting yelp in urgent, incantatory gushes over her frenetic fiddling. Behind her, vivacious, odd-metered dance rhythms paced a kaleidoscopic orchestral roil. The performance, ably conducted by Eric Jacobsen, had its rough spots, but intensity, exuberance and commitment more than compensated. . . . Gracious instrumental versions of two Schubert songs -- Gretchen am Spinnrade, orchestrated by Lev Zhurbin (known as Ljova); and “Des Baches Wiegenlied,” reworked by the violinist Colin Jacobsen (the conductor’s brother) -- preceded Mr. Haber’s work. After it, dance held sway in a pert account of Stravinsky’s Pulcinella Suite and the intoxicating whirl of Ascending Bird, a Persian folk melody arranged by Colin Jacobsen and Siamak Aghaei" [Steve Smith, The New York Times, 1/13/11]. 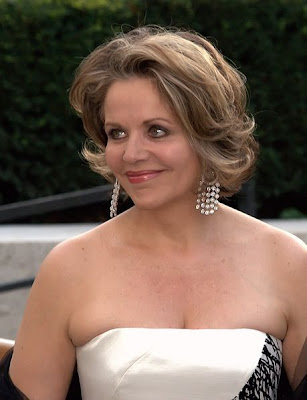 Renée Fleming. Carnegie Hall, New York, NY. "[A] fascinating recital . . . with the elegant German pianist Hartmut Höll, who has been her frequent accompanist since 2001. . . . Fleming took her audience into the artistic circle in Vienna in the early years of the 20th century [in a repertory] that centered on the composer Alexander Zemlinsky. Born in Vienna in 1871, Zemlinsky was championed in the mid-1890s by Brahms. Around the same time he gave lessons in counterpoint to Schoenberg, who was only three years younger. Zemlinsky’s sister Mathilde became Schoenberg’s first wife. Focusing on music written in 1907, Ms. Fleming sang a single song by Schoenberg, Jane Grey, and Five Songs by Zemlinsky. Jane Grey sets a poem by Heinrich Ammann about the young noblewoman who was elevated to queen of England for nine days in 1553 before being executed for treason. In this lush, texturally murky music you hear Schoenberg roaming unmoored through new harmonic waters. The vocal line shifts from stretches of elegiac lyricism to bursts of Expressionist anguish, which Ms. Fleming sang with an alluring blend of plush colorings and expressive restraint. Zemlinsky’s Fünf Lieder, settings of five poems by Richard Dehmel, tells a tortured story of an adulterous affair. The year Zemlinsky wrote this work Mathilde began an affair with a painter that nearly wrecked her marriage to Schoenberg. If not quite as daring as Schoenberg’s Jane Grey, the Zemlinsky songs speak a similar musical language. In the piano passages thick, wayward chromatic chords are pierced with twisting inner voices, played here with a rich sound and suppleness by Mr. Höll. . . . To end the first half she performed three songs by Korngold, born in 1897, and another Zemlinsky student. After the Schoenberg and Zemlinsky works, the lush Korngold songs sounded almost like Puccini. . . . Fleming leapt to a work from 2005, Songs From ‘The Book of Hours: Love Poems to God,’ settings of Rilke texts by the jazz pianist and composer Brad Mehldau. As performed here Mr. Mehldau’s harmonic language, dense with wayward chords, seemed like a latter-day riff on Zemlinsky and his circle. Except, that is, for bursts of Ellington energy and some restless Mingus-like bass lines. Mr. Mehldau clearly wrote these songs to showcase Ms. Fleming’s voice. . . . No music suits Ms. Fleming more than Strauss, and she sounded terrific in four Strauss songs that ended the program. Familiar fare came only during the encores, with the Korngold aria Marietta’s Lied and Bernstein’s I Feel Pretty from West Side Story. The audience cheered the Bernstein, though I found it overly theatrical and a little goofy. But I cannot remember hearing a more exquisite performance of Strauss’s Morgen, her final encore" [Anthony Tommasini, 1/12/11].

Haven String Quartet and S. Luke's Steel Band. St. Luke’s Episcopal Church, New Haven, CT. "The concert . . . will . . . offer works of hip-hop-inspired classicism and classically inspired rap. vant to them . . . . [T]he Haven String Quartet . . . will perform two pieces on its own: the Lyric Quartet, a three-part suite in the Debussy mode written in 1960 by the African-American composer William Grant Still, and Rosa Parks, part of A Civil Rights Reader, an ongoing project of the Haitian-American violinist and composer Daniel Bernard Roumain. . . . The decision to focus on Mr. Roumain, 40, who seems as comfortable writing string quartets as he was appearing with Lady Gaga on American Idol, is an apt one. Told of Music Haven’s decision to play Parks, he expressed appreciation, noting that the piece was his fifth for string quartet, and a sixth had been commissioned by Community Music Works in Providence, R.I. . . . For a work with credibility in the classical world, Parks -- especially the second movement, Klap Ur Handz, which instructs the musicians to clap and stomp in a kind of call-and-response pattern -- generates unusual enthusiasm among young urban audiences. When the Haven String Quartet previewed the movement at a recent 'performance party,' one of the gatherings at which Music Haven students play for family and friends, the crowd spontaneously clapped along. . . . The mixing of string quartet and steel band cultures is not the only collaboration that will take place at the concert. Netta Hadari, a London-born violinist of Israeli heritage who spent much of his adolescence in South Africa, will bring his experience to the table with Music Haven Rap" [Phillip Lutz, The New York Times, 1/14/11].

Diotima Quartet. Frick Collection, New York, NY. Also January 19, Austrian Cultural Forum.
"[T]he Diotima offered works from around the edges of the standard repertory. . . . The Frick performance closed with a supercharged, tightly unified account of the Ravel Quartet, but as driven and dazzling as the outer movements were, the reading’s most memorable moments were in the slow movement. The haunting juxtaposition of a dark-hued theme and its tremolando accompaniment was perfectly balanced, and muted passages played with a vibratoless, almost organlike tone were especially affecting. At the Austrian Cultural Forum the quartet put its modernist side on display. The ability to switch gears quickly and fluidly, as it did in the Janacek, served it particularly well here, and that talent was tested immediately in the restlessly assertive String Quartet No. 6 (2010) by the Scottish composer James Dillon. Mr. Dillon’s sound world is variegated and changeable: sudden crescendos evaporate in pianissimo chords; quiet pizzicato passages unfold into sequences of descending slides that evoke whining, at times, and exoticism elsewhere. After the Dillon, Webern’s Five Movements (1909) sounded like an antiquity. It was not that the players underemphasized Webern’s free use of dissonance and spare, often eerie timbres; they reveled in them. But they also made the most of occasional backward glances that, even where they last only a bar or two, offer what in this reading seemed a wistful memory of a vanishing world. Roger Reynolds’s Elliott (2008) opens with an exquisite soliloquy for violin -- given a virtuosic reading by Mr. Zhao (the two violinists alternate in the first chair) -- and expands into a concise but intense meditation that has elements in common with the Dillon score. The quartet closed its program with Thomas Larcher’s spacious, five-movement Madhares (2007), a work it recorded for an ECM compilation of Mr. Larcher’s music, released last year. It is an extraordinary piece: like the Dillon, it is rich in effects, and its language can be abstruse, even terrifying. One section seemed to combine the avian swarm of Hitchcock’s Birds with the violin stabs in Bernard Hermann’s Psycho score. Yet these tense sections often melt into something entirely different -- modal, folksy melodies, refracted through lightly dissonant harmonies, for example, or unabashedly shimmering Romanticism. The score, inspired by the White Mountains of Crete, was both familiar and otherworldly, and left a listener eager to hear it again" [Allan Kozinn, The New York Times, 1/18/11].

Pianist Jonathan Biss. Carnegie Hall, New York, NY. "On this snowy winter night he drew an enthusiastic audience and played very well . . . his program [including] Janacek’s Sonata 1.X.1905 [and] a recent work by Bernard Rands . . . The Moravian-born Janacek’s mesmerizing sonata, subtitled 'From the Street,' was written in reaction to a wrenching public event in 1905: a young carpenter was killed during a demonstration to demand an autonomous university where courses were conducted in Czech, not German. Janacek was an early enthusiasm for Mr. Biss, and he gave a rhapsodic account of this elusive work, which alternates spiraling, misty outbursts with staggered phrases of elegiac melodies. Mr. Rands wrote Three Pieces for Piano last year for Mr. Biss, who has been playing them on tour. This was the first New York performance. The pieces were inspired, Mr. Rands notes, by the piano music of Scriabin, Debussy and Ravel. In a way Scriabin’s restless flights, Debussy’s intense tranquillity and Ravel’s dazzling colors are evoked at once. Caprice is all runs and riffs and fitful chords. In the slow middle piece, Aubade, melodic fragments are woven into strings of thick yet lucid chords with hints of Berg, Messiaen and Bill Evans. Arabesque is an exercise in quick repeated notes and skittish spurts. Mr. Biss played this brilliant 13-minute group of pieces with nimble technique and myriad colorings" [Anthony Tommasini, The New York Times, 1/23/11].