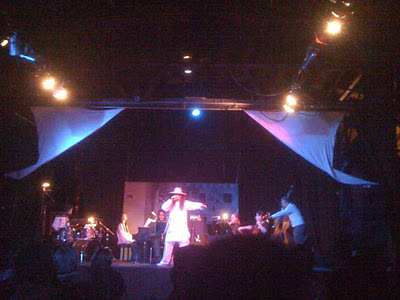 What a difference a year makes and does not make. The contrast was the increased size of the audience and hall; the consistency was in the energy and quality.

Billed as a hip-hop opera, the full-evening piece is more like an extended classical/jazz/rap cantata (story sans staging), scored for septet that encompasses both a Pierrot ensemble and jazz trio (with piano as common denominator). The vocal fire on top is provided by two rappers, who blazed their way through the night in a fiery pepper of sixteenth notes, particularly clearly and charismatically by Rico Pabon in the second half.

Great Integration, despite its arch libretto, is an important, innovative work, and the audience responded throughout with whoops and cheers. Here the hip-hop vocalists get a worthy launching pad, with a nuanced instrumental component that goes far beyond two-bar loops -- referencing minimalism, Rachmaninoff, Chopin, and the baroque, among other musics. The punchy ensemble rhythms were bang-on, including the signature subdivision of 3+3+3+3+2+2 articulated over standard 4/4 measures. If the descending bass line I-bVII-bVI (the same used ad infinitum in the last 5 minutes of the Led Zeppelin Stairway to Heaven and Pilate's Song in Andrew Lloyd Webber's Jesus Christ Superstar) gets an impressive amount of usage, certainly the rhythmic figures above it are ever-arresting. A default full-instrumental build up followed by solo piano shows itself as another norm. Throughout, Kim is not afraid to slim down the music to delicate textures, which somehow make the over-the-top full-vocal declamations that more electrifying.

A thoroughly enjoyable and thought-provoking entertainment throughout -- shall we say, greatly integrated. Keep your eyes and ears out for Joowan Kim and Ensemble Mik Nawooj
Posted by Mark Alburger at 9:00 PM