Going It Alone by Going It Together / Mark Alburger 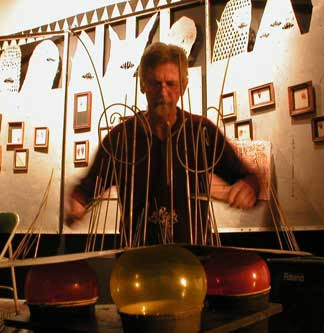 When Harry Partch felt drawn to microtonality, he pretty much had to go it alone, by inventing his own musical instruments. But he enlisted the help of many others in bringing his artistic vision to light.

So the legacy continues in the early 21st-century, with two San Francisco Bay Area composers of international importance, heard over the last several weeks -- Tom Nunn (February 17) and Erling Wold (March 22) -- who have forged their own sound worlds independently, through the welcome collaboration of many.

Nunn's is the closer analog, as one of the direct aesthetic descendents of Partch, continuing the tradition of instrument-building. A retrospective, organized by consumate musicians David Michalak and Rent Romus (the latter of Edgetone Records), at San Francisco Community Music Center, found the composer in the company of his exotic-looking and named sonic creations, including the Crab, Sonoglyph, T-Rodimba, Skatchboxes, and Lukie Tubes -- which produced live hit-and-scraped sounds from such material as cardboard, metal, and plastic electronically amplified.

In the spirit of community, all the works on the program featured the expert collaboration of the improvising composer with others of his aesthetic ilk, including Bart Hopkins (on Fingerbars and Moe), pianist-composer Allan Crossman (whose intriguing Sonoglyph-concerto Plasticity, premiered by the San Francisco Composer Chamber Orchestra, was heard hear in a piano reduction), and "blues-brothers" Mike and Gary Knowlton. Most of Nunn's collaborators, such as vocalists Ron Heglin and Aurora Josephson, cellist Doug Carrol, percussionist Karen Stackpole, and saxophonist John Ingle took off from where John Cage and free jazz provided springboards, in music that was ephervescent and free, ranging from the hilarious to the solemn. 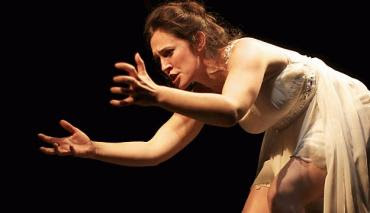 The celebratory in the serious was also an informing principal in Erling Wold's Certitude and Joy, premiered on March 22 at South of Market's Bindlestiff Studio, through April 1. And while Wold also originally garnered attention with his early microtonality, his music since at least the mid-nineties has evolved post-minimally in the spirit of Philip Glass and John Adams, to encompass an energetic and gorgeous sound world of arch rhythms (how about a time signature of 15/8 with 20 syncopated dotted-16th notes?) and sinuous recitatives. Wold is at heart another do-it-yourselfer: composing and writing his libretto (the latter arguably a first for him here), self-producing (with the interesting assistance of Paul Dresher), and for this piece even appearing as actor, dancer, and singer.

But what a wealth of further talent he has assembled here, with actors Bob Ernst (portraying "Erling Wold") and and Talya Patrick (the focus of dramatic attention), dancers Kerry Mehling (who also served as the amazing choreographer) and the suprisingly-lithe Travis Santell Rowland, beautiful and powerful singers Laura Bohn and Jo Vincent Parks, and the dexterous and wizardly piano duo Zofo (Eva-Marie Zimmermann and Keisuke Nakagoshi) -- all wonderously under the direction of Jim Cave.

And the story: a dangerous, sensitive, and sympathetic mixture of the Abraham's Sacrifice story (also a focus for Benjamin Britten's War Requiem and the current author's Sex and the Bible), the Crucifixion, and Oakland's LaShaun Harris, who threw her three young sons into San Francisco Bay in 2005. A tour-de-force all around, with perhaps Wold's loveliest vocal melodies and comparatively clearest storyline of his chamber operatic career.
Posted by Mark Alburger at 9:00 PM