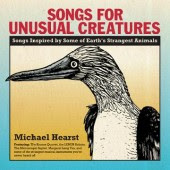 Michael Hearst. Songs for Unusual Creatures. Kronos Quartet; Microscopic Septet; Margaret Leng Tan, toy pianist; Michael Hearst, multi-instrumentalist; others. Urban Geek Records. "Michael Hearst is best known as a member of One Ring Zero, an ensemble that mixes chamber and pop styles and is as prolific as it is quirky. But Mr. Hearst has also been branching out on his own. When the Kronos Quartet performed Secret Word, his zany tribute to Pee-wee Herman, at Zankel Hall in February, Mr. Hearst was on hand to play theremin and claviola and to conduct an orchestra of toy instruments. Think of Mr. Hearst’s 16-movement Songs for Unusual Creatures as an exotic updating of Carnival of the Animals, with freewheeling, postmodern eclecticism in place of Saint-Saëns’s . . . Romanticism, and a parade of exotic specimens -- the elephant shrew, the blobfish, the magnapinna squid -- substituting for the original’s . . . menagerie. The work’s title notwithstanding, there are no texts. But Mr. Hearst, who is also an author, has written a related book, Unusual Creatures, due out in September from Chronicle Books. Mr. Hearst begins with a circusy march scored for brasses, woodwinds, accordion and percussion, the first of several movements to bear a distinct trace of Kurt Weill’s cabaret style. In Aye-Aye, a collaboration between the Kronos Quartet and Mr. Hearst, playing several amplified instruments, a klezmer-tinted violin line gives way to rhythms that evoke Shostakovich, harmonies lifted from Schubert and a graceful layer of electronica. Margaret Leng Tan’s toy pianos paint Jesus Christ Lizard in trebly, tactile sonorities, and Blobfish seems perfectly drawn as a duet for contrabassoon and tubax (a deep-voiced saxophone). Humpback Anglerfish draws on gamelan figuration, and other movements -- Bilby and Weddell Seal -- are more overtly electronic. But if some of the set’s surprises are in the way Mr. Hearst’s scoring changes from piece to piece, most are in this spirited music’s painterly inventiveness and lively humor" [Allan Kozinn, The New York Times, 6/1/12].
Posted by Mark Alburger at 7:00 PM