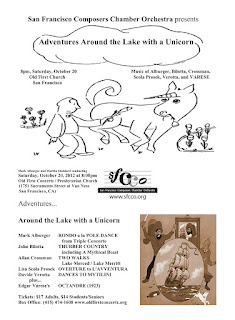 Sometimes a busy schedule can work to advantage.  You may not be able to squeeze everything but you can get a lot done.  And so it was that I went to Berkeley, on October 20, to see and review four films in the Arab Film Festival and then decamped to the city for the San Francisco Composers Chamber Orchestra's Adventures Around the Lake with a Unicorn, at Old First Church.  I got there late, and the piece in progress was Allan Crossman's 2012 Two Walks, of which I seem to have caught the second A Walk at Lake Merritt, an imaginative chromatic affair, which , not wanting to disturb the performers, I heard in the vestibule.  And this odd vantage point once again exposed the sonic shortcomings of this brick walled hall.  High pitches tended to blur, overtones dropping in and out with a kind of "soundless" thud.

The venue's acoustic was far more forgiving with John Bilotta's five-movement Thurber Country (2012) which didn't push the sonic envelope, but was nevertheless well-crafted, and certainly charming. Lisa Scola Prosek's 2012 overture to her opera-in-progress L'Aventura, set to premiere in 2013, is easily one of  her best pieces.  The two excerpts here -- Si, che sono triste, perche' mi mancano le stelle -- for orchestra, with the Scola Prosek at the piano, and Bocca baciata -- which she sang with co-soprano Maria Mikheyenko -- featured deft part writing, seductive yet contained colors, and piquant or calming harmonies.  It called to mind what late composer-friend Virgil Thomson once said about his teacher Nadia Boulanger. "She taught you that writing music was like writing a letter.  All you had to do was say what you had to, and then stop."  Scola Prosek's music here was that letter, and the hall thankfully didn't get in its way.

I'm not sure what to make of Mark Alburger's 2012 Triple Concerto for Bassoon, Contrabassoon, and Harp (" Family"), though its scoring was certainly unorthodox, and the family in question -- Michael, Lori, and Samantha Garvey -- and the orchestra seemed up to its not inconsiderable demands.  The first of its three movements -- "Allegro " -- was easily the best -- tight, its musical argument apprehendable -- while the other two seemed incompletely thought out, and therefore less expressive. But the orchestra, under Alburger's firm beat, gave it their all.

Too bad I missed Varese's 1923 Octandre, and the opening Dances to Mytilini (2011), by Davide Verotta, who can be a very striking composer.

The performers throughout l sounded completely engaged, which isn't an easy feat in our "economic downturn " times.  But then music, and art have always mattered most when there's trouble at your door.  Boccacio was right.  Tell stories whatever the night.
Posted by Mark Alburger at 9:00 PM