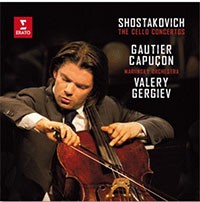 Dmitri Shostakovich.  The Cello Concertos [Cello Concerto No. 1 in E-Flat Major, Opus 107 (1959);
Cello Concerto No. 2 in G Major, Opus 126 (1966)].  Gautier Capuçon, Mariinsky Orchestra, conducted by Valery Gergiev.  Erato 0825646069736.  "Only seven years separate the composer’s . . .[cello concerti], but they are worlds apart in terms of mood.  Both works were written for Mstislav Rostropovich, whose premier recording of the First, with the Philadelphia Orchestra under Eugene Ormandy, established it as an instant classic, and the most popular cello concerto of the second half of the 20th century.  No amount of his advocacy could do as much for the Second, a rarity prized by cellists, rather than audiences.  Capuçon’s gripping account, recorded live in St Petersburg with Gergiev’s Mariinsky, might alter its fortunes, as collectors will undoubtedly want his extrovert account of the First, recorded at a Paris concert with the same forces" [The Times of London, 11/29/15].  "Two live recordings, made in December 2013 at Paris’s Salle Pleyel and June 2014 at St. Petersbourg’s Mariinsky Thetre with the Mariinsky Orchestra. . . .  The first was composed . . . a year after the Central Committee of the Communist Party admitted that in 1948 there had been unjust condemnation of Shostakovich and other composers as ‘Formalist' . . . . The two concertos are different in spirit and shape: the first is often assertive and energetic, and features a huge cadenza for the cello that is almost a movement in its own right, while the second is introspective and enigmatic" [mdt.co.uk].
Posted by Mark Alburger at 8:00 PM