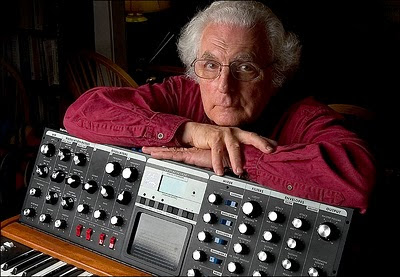 Robert Arthur Moog (pronounced to rhyme with "vogue") (May 23, 1934, New York, NY - August 21, 2005) constructed his own theremin as early as 1949 when he was 15. Later he described a theremin in the hobbyist magazine Electronics World and offered a kit of parts for the construction of the Electronic World's Theremin, which became very successful.

He attended the Bronx High School of Science, graduating in 1952, and in the next year, at 19, founded his first company, R.A. Moog Co., to manufacture theremin kits. During the 1950's, composer and electronic music pioneer Raymond Scott approached Moog, asking him to design circuits for him. Moog later acknowledged Scott as an important influence.

Moog's first wife was Shirleigh Moog (born Shirley May Leigh) a grammar school teacher whom he married in 1958. The couple had 3 daughters (Laura Moog Lanier, Michelle Moog-Koussa, Renee Moog) and one son (Matthew Moog) before their divorce.

In the 1960's, Scott's company was employed to build modular synthesizers based on Moog's designs.

The Moog synthesizer was one of the first widely used electronic musical instruments. Early developmental work on the components of the synthesizer occurred at the Columbia-Princeton Electronic Music Center, now the Computer Music Center. While there, Moog developed the voltage controlled oscillators, ADSR envelope generators, and other synthesizer modules with composer Herbert Deutsch.

Moog created the first voltage-controlled subtractive synthesizer to utilize a keyboard as a controller and demonstrated it at the AES convention in 1964.

In 1966, Moog filed a patent application for his unique low-pass filter U.S. Patent 3,475,623, which was issued in October 1969. Through the years, he would hold several dozen patents.

Robert Moog employed his theremin company (R. A. Moog Co., which would later become Moog Music) to manufacture and market his synthesizers. Unlike the few other 1960's synthesizer manufacturers, Moog shipped a piano-style keyboard as the standard user interface to his synthesizers. Moog also established standards for analog synthesizer control interfacing, with a logarithmic one volt-per-octave pitch control and a separate pulse triggering signal.

One of Moog's earliest musical customers was Walter (later, Wendy) Carlos whom he credits with providing feedback that was valuable to the further development of Moog synthesizers.

Carlos's Switched-On Bach (1968, CBS) played a key role in popularizing classical music performed on electronic synthesizers, which had until then been relegated to experimental and popular music. The album fostered a significant increase in interest in electronically-rendered music in general, and the Moog synthesizer in particular.

The first Moog instruments were modular synthesizers. In 1971 Moog Music began production of the Minimoog Model D which was among the first widely available, portable and relatively affordable synthesizers.

In 1972, the inventor changed the company's name to Moog Music. Throughout the 1970's, the company went through various changes of ownership, eventually being bought out by musical instrument manufacturer Norlin. Poor management and marketing led to Moog's departure from his own company in 1977.

In 1978 after leaving his namesake firm, Moog started making electronic musical instruments again with a new company, Big Briar, with a specialty in producing theremins.

During his lifetime, Moog founded two companies for manufacturing electronic musical instruments. Moog also worked as a consultant and vice president for new product research at Kurzweil Music Systems from 1984 to 1988, helping to develop the Kurzweil K2000.

In the late 1980's Moog repaired the original theremin of Clara Rockmore, an accomplishment which he considered a high point of his professional career. He also produced, in collaboration with first wife, Rockmore's album, The Art of the Theremin. Moog was a principal interview subject in the award-winning documentary film, THEREMIN: An Electronic Odyssey, the success of which led to a revival of interest in the instrument. Moog's company went back to its roots and once again began manufacturing theremins. Thousands have been sold to date and are used by both professional and amateur musicians around the globe.

He spent the early 1990's as a research professor of music at the University of North Carolina at Asheville.

Despite Moog Music's closing in 1993, the founder did not have the rights to market products using his own name throughout the 1990's.

In 1996 he published another do-it-yourself theremin guide. Today, Moog's company is the leading manufacturer of performance-quality theremins.

By 1999, Big Briar expanded to produce a line of analog effects pedals called moogerfoogers. That same year found Moog partnered with Bomb Factory to co-develop the first digital effects based on Moog technology in the form of plug-ins for Pro Tools software.

In a 2000 interview, Moog said "I'm an engineer. I see myself as a toolmaker and the musicians are my customers. They use my tools."

Big Briar acquired the rights to use the Moog Music name in 2002 after a legal battle with Don Martin who had previously bought the rights to the name Moog Music. At the same time, Moog designed a new version of the Minimoog called the Minimoog Voyager. The Voyager includes nearly all of the features of the original Model D in addition to numerous modern features.

He gave an enthusiastically-received lecture at the 2004 New Interfaces for Musical Expression , held in Hamamatsu, Japan's "City of Musical Instruments," in June, 2004, and was the inspiration behind the film Moog of that same year.

Robert Moog was diagnosed with a glioblastoma multiforme brain tumor on April 28, 2005. Nearly four months later, Moog died at the age of 71 in Asheville, North Carolina on August 21, 2005. His end of life journey was captured using CaringBridge. The Bob Moog Foundation was created as a memorial, with the aim of continuing his life's work of developing electronic music.

The surname Moog remains one of the most divergently pronounced names in popular culture.

Reviewer: First off: Does your name rhyme with "vogue" or is like a cow’s "moo" plus a "G" at the end?

Moog: It rhymes with vogue. That is the usual German pronunciation. My father's grandfather came from Marburg, Germany. I like the way that pronunciation sounds better than the way the cow's "moo-g" sounds.

In a deleted scene from the DVD version of the documentary Moog, the engineer describes the three pronunciations of the name: the original Dutch, which he believes would be too demanding of English speakers; the preferred Anglo-German pronunciation; and a more anglicized pronuciation. Moog revealed that some of his family members preferred this manner, while others, including himself (and his wife) prefered the Anglo-German.
Posted by Mark Alburger at 10:00 PM