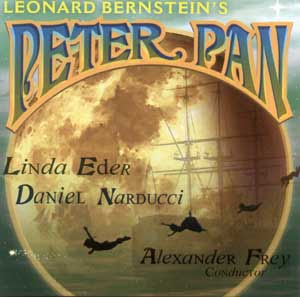 Leonard Bernstein. Peter Pan. Koch International. "Collectors of original-Broadway-cast albums -- and few others -- will know that a lifetime ago, in 1950, Leonard Bernstein dashed off the score for a reasonably successful revival of J. M. Barrie's Peter Pan. Jean Arthur, in the title role, celebrated her 50th birthday midway through the run. Boris Karloff, best remembered as Frankenstein's Monster and Dr. Fu Manchu, was Captain Hook. For the record, the League of American Theaters and Producers lists the show as a play. Karloff was not much of a vocalist; Arthur was none at all. So the singing honors, such as they were, passed to Wendy (Marcia Henderson) and the Pirates. Of six songs Bernstein had delivered, five were performed, mostly cut to ribbons; and his incidental music disappeared completely, replaced by that of the songwriter and arranger Alec Wilder. End of story? No longer, thanks to Alexander Frey, an American based in Berlin and the conductor of the historic Karlin Music Theater in Prague. After seven years reassembling the tatters, he has recorded the complete score for Koch International. Linda Eder and Daniel Narducci, both with long résumés in American musical theater, sing the songs, accompanied by the so-called Amber Chamber Orchestra. (Insiders will not need to be told the German word for 'amber' is 'Bernstein'). Now the question is, Who will be more surprised? Those who never heard of Bernstein's Peter Pan before or those who thought they knew it? Like . . . Candide (1956), to which it bears an occasional resemblance, Peter Pan falls between the smash hits On the Town (1944) and West Side Story (1957), which belong to a different world. Plank Round, a taunt sung as the Lost Boys await a watery death, is expanded from a single verse to a rip-snorting three, jazzed up with a wild little ritornello that might have been torn from a switched-on Brandenburg Concerto. A mermaids' chorus called Neverland, presented for the first time, brings to mind lazy, sensual pages from Ravel's Daphnis et Chloé.
A soliloquy for Hook, delivered by Karloff as purple prose over Wilder's generic underscoring, emerges here as a subtle operatic arioso, oddly reminiscent of the Benjamin Britten of Billy Budd (The lyrics are Bernstein's own, with a negligible assist from Marc Blitzstein, of The Cradle Will Rock fame, whose paycheck was $200, to Bernstein's $12,000). Pirate Song, which came through pretty much unscathed in 1950, remains a black comic pearl. 'We are eviler far than the tenors are,' cry the basses. 'It is true that the basses/ Have eviler faces,' the tenors concede, 'But we are more evil inside.' Soon Hook trumps them all, breaking in with his formula for world-class villainy: Eat Blood! Drink Blood! Dream Blood! Drink Blood! Karloff blustered through the big, bold phrases in cadaverous but oddly bloodless tones. Mr. Narducci sets the ears ringing but interjects finicky little breaks ('Drink BLUH-hud') that turn a pirate king into a stage dowager. Wendy's Who Am I? poses precocious existential questions in terms of pensive tenderness. Build My House has the heart and sentiment of a Victorian valentine; the frisky Peter, Peter playfully captures a girl's sexual awakening. Ms. Eder finds the right tone for each but surpasses herself in the radiant serenity of Dream With Me, discarded in 1950. On a bonus track, Ms. Eder offers Spring Will Come Again, joined by Michael Shawn-Lewis and accompanied on piano by Mr. Frey. Another new discovery, it was intended for an abortive musical version of Thornton Wilder's Skin of Our Teeth. . . . But this album is not just about the songs. The incidental music, all heard here for the first time, is also bewitching. Flight and skirmishes are expertly evoked, and the thematic developments are nifty. Is there enough here to support a full theatrical production? No. Other characters -- a lot of them -- would need songs. But the songs Wendy does have deserve an independent afterlife. Alternatively, the pirate songs and the love songs could be stitched into a charming suite. They are quality fare. Children attending concerts deserve music this good, and so do their parents" [Matthew Gurrewitsche, The New York Times, 8/7/05].

Chamber Music of Carlos Chávez. Cambria. "From a distance, Mexico is the source of many beautiful things and the source of much chaos. Strangers are enthralled and maybe even a little frightened by the extravagance -- a certain riotousness of emotion and imagination that plays against other deeply civilized elements of Mexican culture. We may never find a way to make sense of the two together. Better to take each element as it comes. If the music of Silvestre Revueltas at its most unbuttoned confesses a kind of brilliant savagery, that of his contemporary Carlos Chávez is more reasonable, less dangerous. The third of four Cambria CD's by Southwest Chamber Music and the Tambuco Percussion Ensemble devoted to Chávez's chamber pieces shows a composer smoothing and ordering Mexican art's more ardent impulses. All the elements of Mexico's eruptive beauties are here. Indeed, much of this music is for timpani and percussion. But Chávez, who died in 1978, managed musical composition as well as he did his career, shrewdly and elegantly. Stravinsky and Varèse were friends. Chávez made himself known to the world. Everything in this collection is attractive. Chávez, the Mexican, is at his most uninhibited in the six Exágonos after poetry by Carlos Pellicer, with a richly colored instrumental quintet and here the soprano Alba Quezada. The timpanist Ricardo Gallardo and his three Tambuco associates are kept busy, but even in pieces Xochipilli, an Imaginary Aztec Music or the Partita for Solo Timpani a sense of neatness hangs over such naturally theatrical opportunities. Jeff von der Schmidt is the conductor and the mezzo-soprano Suzanna Guzmán sings the Lamentaciónes and the Cuatro Melodías Tradicionales Indias del Ecuador, both with instrumental accompaniments. Chávez had a distinct place in mid-20th-century musical history, and these recordings help us remember it" [Bernard Holland, 8/30/05]. 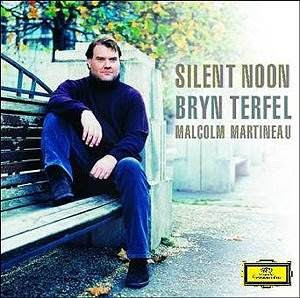 Bryn Terfel. Silent Noon. Geutsche Grammophon. "The Welsh bass-baritone Bryn Terfel is a bona fide opera star in the old style who . . . sets the era's standard. He is also a charismatic recitalist . . . . Music lovers may recall Mr. Terfel's first foray into this repertory, The Vagabond, a collection of heavy-hearted songs by Ralph Vaughan Williams, Gerald Finzi, George Butterworth and John Ireland released 10 years ago by Deutsche Grammophon. That disc, with Malcolm Martineau accompanying, earned high praise and marked the start of Mr. Terfel's prolific international recording career. Now, with the release of Silent Noon, also on Deutsche Grammophon and with Mr. Martineau again at the piano, he revisits this territory. The new record is no mere sequel to an earlier triumph. For starters, Mr. Terfel champions even less familiar composers. Anyone for Arthur Somervell, Michael Head and Thomas Dunhill? Not that familiar names are entirely absent; Benjamin Britten and Vaughan Williams are also here.
A more significant departure is this record's lighter, livelier mood, a contrast most obvious when you compare two cycles inspired by A. E. Housman's Shropshire Lad. The earlier CD offered Butterworth's devastating six-poem cycle of 1911; the new disc, Somervell's jauntier rendering of 10 poems from 1904. Mr. Terfel is most in his element in music of bold declamation, hale fellowship and ripe comedy, in songs like Roger Quilter's Blow, Blow, Thou Winter Wind (from Shakespeare's As You Like It), Head's music-hall-inflected Money, O! and Peter Warlock's rum-soaked Captain's Stratton's Fancy. And when he brings his considerable powers to Frederick Keel's Three Salt-Water Ballads, he elevates lesser fare to high art, conveying sea spray like none since the great American baritone Leonard Warren. The album takes its title from a poem by the pre-Raphaelite Dante Gabriel Rossetti, set tenderly by Vaughan Williams. Here, Mr. Terfel offers a trademark effect: winnowing his expansive voice down to a whisper and then floating a high note that -- poof -- vanishes. The disc concludes with two songs by that eminent Victorian Charles Villiers Stanford, here masquerading as Karel Drofnatski (spell 'Stanford' backward, and you'll get the joke). Setting limericks by Edward Lear -- yes, each begins "There was an old man ..." -- Stanford makes delicious mockery of musical convention, transforming Lear's Aquiline Snub into a stock dramatic aria à la Handel, with some Bach-like counterpoint interpolated. Even better is The Complete Virtuoso, with the violin concertos of Beethoven and Mendelssohn ingeniously fused in an 80-second song. The impact there comes more from Mr. Martineau's supple pianism than from Mr. Terfel's exertions, but the singer would doubtless be the first to praise his partner, whom art-song lovers have long celebrated. In the potentially musty vocal music of Britain, Mr. Martineau, like Mr. Terfel, is virtually peerless, something both prove once more with this record" [David Mermelstein, The New York Times, 8/14/05].
Posted by Mark Alburger at 7:00 PM