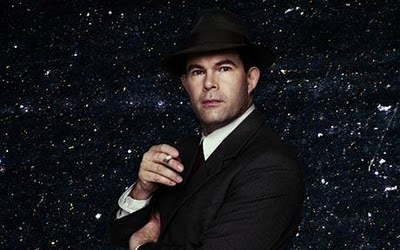 Sometimes not attending opening night can be a good thing, especially in the case of a premiere. A "shake-down" cruise can be a shaky situation, and opening night can seem like a final dress rehearsal. By a week or so into a run, all the elements can be assembled for a demonstrative hit or miss.

OK, truth is, we didn't think we could score tickets to the first performance of John Adams's "Dr. Atomic," commissioned by San Francisco Opera, since critics were flying in from around the country and around the world. But that just allowed us the luxury of hearing how opinions were swirling about the work, before finally weighing in about a potential fat man or little boy of opera.

So, is it incandescent or a dud?

Well, it's not a blast, but it's not a fizzle, either. After a provocative electronic soundscape (a lesser-known arena for Adams), the tone is established immediately in the earnest choral overture "Matter can be neither created nor destroyed but only altered in form" (an intentionally outdated bit of science proved completely wrong by the course of events). The harsh lighting and massive weapons-of-mass-destruction scaffolding recall the design of Adams's previous "Death of Klinghoffer." Reminiscent as well was the use of a committed -- or even partisan -- Greek chorus; but unlike in the earlier opera, here the music is more in the manner of mass recitative. Paradoxically on the page, the music looks lyrical, as the phrases have repeating contours, but with the meticulous text setting and the sustained bass harmonies, we are clearly in a realm where the words at least as important as the music.

Well, isn't that the conundrum? Historically, since at least the birth of opera in the early 1600s, and indeed earlier going back to various religious traditions use of music, this has been among the great questions -- the relative importance of words/ideas vs. music/aesthetics (would they not be such a dichotomy, yet there it remains). And the solution that Claudio Monteverdi seemed to hit upon in "Orfeo" was one that Adams eerily replicated in "Klinghoffer": choruses in an "antique" style (for Monteverdi it was old-style renaissance madrigal, for Adams it was minimalism), and for solo singers it was a newer "reciting" style.

In "Dr. Atomic," Adams has clearly gone over to a mostly recitative realm, even in the choruses. As with Richard Wagner, Adams is a brilliant orchestrator and symphonic melodist. The singers seem to be along for the ride, sometimes connecting up with the overall musical-instrumental argument, but often left in their own tangle of words.

And there are a lot of them, in an engaging found-text libretto assembled by director and long-time Adams collaborator Peter Sellars -- government documents, reminiscences of project physicists, poetry by John Dunne, Hindu and Tewa writings. If it didn't add up all of the time, it was a noble effort, along with the flying pipes and overhead lights. Stimulating work was nevertheless heard from Richard Paul Fink, Gerald Finley, and Thomas Glenn, respectively as the forthright Edward Teller, pragmatic yet conscience-wracked J. Robert Oppenheimer (the titular comic-book inspired Dr. Atomic), and the idealistic Robert Wilson (not to be confused with liked-named stage director).

The "slow-movement / feminine" scenes (Act I, Scene ii, and Act II, Scene i) were perhaps the least successful moments, despite lovely efforts on the part of Kristine Jepson (Kitty Oppenheimer) and Beth Clayton (the Oppenheimer's Native-American nanny, Pasqualita). If J. Robert's fixation on the former's hair, however, became a bit of protracted stage business, By contrast the first Act's concluding Scene iii was incandescent. As a thunderstorm lit up the night sky with concerns that the test bomb might be prematurely detonated by a stray bolt of lightning, Adams provided the sturm-und-drang to match. There was even a visual homage to another nuclear-era opera in the slow progression of one of the bombs across the desert floor near Alamogordo -- a tip of the scenic hat to the Philip Glass / Wilson "Einstein on the Beach" slow-train procession. And the concluding Oppenheimer aria was as powerful as advertised, with hints of a Henry Purcell passacaglia (variations on a repeated bass line) in the repeated chromatic droopings setting Donne's "Batter my heart, three person'd God" -- whence the name of the Trinity test site.

Jepson delivered some winning vocalise in the beginning of Act II, while the bomb hung ominously sword-of-Damoclesesque over her infant's crib (the baby doll could have been a tad more realistic and the older child perhaps deserved more than a mere walk-on). While the poignantly-tense ensuing scene played out back in the desert with Glenn and Adams-interpreter-par-excellence James Maddalena (here as the meteorologist Jack Hubbard, who also created the title character in "Nixon in China" and the Captain-protagonist in "The Death of Klinghoffer"), that crib still loomed large under the bomb. Mercifully, it was finally moved before the final explosion.

Eric Owens was in fine form for comic relief as General Leslie Groves, ordering weathermen to give him a better report and confessing to his dietary foibles (the large chocolate bar seemed gratuitous -- and would that we have been given an aria for his calorie-counting, rather than yet another recitative). Even Adams has admitted, "It's hard to set English -- especially just plain flat-out prose like 'He said that I should go over and tell that to Oppenheimer' or something like that. I notice that when I'm composing I can get distracted and lose track of the necessity to make good vocal lines."

The bomb detonation had been billed as a whimper, or a sonic view from a distance, but, while it was not the aural cataclysm the Paul Dresher Ensemble provided in the Zellerbach premiere of Adams's "I Was Looking at the Ceiling and Then I Saw the Sky" (the earthquake was subsequently cut from the recording, however), it as pretty impressive nonetheless, building up initially to another Trinitarian vision, this one Eastern, in an evocation of Vishnu: "At the Sight of your Shape stupendous, full of mouths and eyes." Here as elsewhere, Lucinda Childs (also a veteran from "Einstein") provided active and imaginative choreography -- excellently realized by the dancers and gamely attempted by most of the singers (who were consistently, attractively plus-sized to the dancers -- alas one older gentleman almost center stage, should have been removed to the sidelines as he simply could not get with the program).

The COUNTDOWN conclusion, while building inexorably in tension, was -- as was no doubt the reality -- a bit overlong. Harkening back to Olivier Messiaen's "St. Francis of Assisi," where the dear saint just lingered on for far too long and I found myself heretically thinking "Die already!" here the heinous thought was "explode the gadget, dammit!" It finally did, and somewhere around there was a demi-chorus of Cloud Flower Blossoms and Pasqualita getting to do an interpretive dance with tree branches.

It was a lot to pack into one evening, a brave-new-world game subject to tackle, and I am glad to have been there.

Rather than at the test site. Or worse.
Posted by Mark Alburger at 9:00 PM