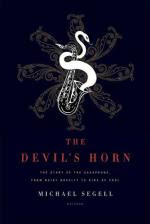 Michael Segell. The Devil's Horn: The Story of the Saxophone, From Noisy Novelty to King of Cool. By Michael Segell. Farrar, Straus & Giroux. "Would someone please forward Segell the memo that states that books about jazz are supposed to be academic and soporific? His freewheeling tribute to the instrument of Coltrane, Hawkins and Rollins begins with a wild retelling of the life of its 19th-century inventor, Adolphe Sax, who endured disfiguring accidents, assassination attempts and a cancerous tumor on his lip so that his namesake horn might outlive him. It's a story that could easily be its own book (or at least a movie starring Tom Hulce), but the rebellious, obsessive spirit of Sax figures prominently throughout Segell's explorations, as the author encounters modern-day disciples who have dedicated their lives to perfecting saxophone mouthpieces or archiving out-of-print saxophone music and recordings. He even attempts to learn the instrument himself from scratch. Some of Segell's journalistic wanderings (like his brief stint performing in the Purdue University marching band) feel frivolous, but based on the exuberance that is everywhere to be found in The Devil's Horn, it's clear he grasps the jazzman's dictum that it's the journey, not the destination" [Dave Itzkoff, The New York Times, 12/4/05].

Studs Terkel. And They All Sang: Adventures of an Eclectic Disc Jockey. New Press. "In the introduction to his latest indispensable oral history, adapted from interviews he conducted for his radio show on Chicago's WFMT, Terkel laments that 'many names will be unknown to younger readers.' He's probably right: aside from a 1963 chat with an unconvincingly modest Bob Dylan ('I'm just sort of trying to find a place to pound my nails') and an eerily prophetic conversation with Janis Joplin ('I'm not going to sing 'Down on Me' for 20 years'), Terkel's dialogues with more than 40 legends of jazz, blues, folk and classical music may not immediately resonate with the Total Request Live crowd. But his singular gift for bringing his subjects to life in their own words should strike a chord with any music fan old enough to have replaced a worn-out record needle. Miss this volume, and you will miss Louis Armstrong's stories of halting a civil war in Africa, Leonard Bernstein's (favorable!) comparison of the Beatles to Porgy and Bess, and a charming little anecdote about how Enrico Caruso once ended up in jail ('I just pinched her fanny a little')" [Dave Itzkoff, The New York Times, 12/4/05].
Posted by Mark Alburger at 7:00 PM