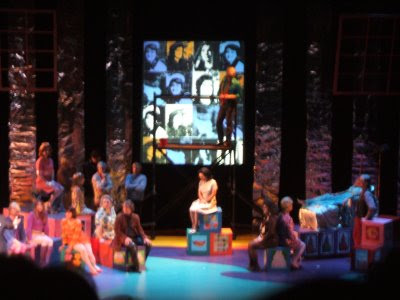 Michael Daugherty is the avant-garde Liberace of contemporary classical music: gaudy, not afraid to buy into popular culture, with a certain emotive elegance behind the eccentricity. And for his ground-breaking 1997 opera Jackie O, given in evidently only its third staging (after previous productions in Texas and Italy) by College of Marin in a run from February 28 through March 15, he shows himself at the height of his cultivated-vernacular game.

The year is 1968. What else can one have but an opening faux-pop number using this number? Daugherty does just this, preceeding it with an evocative solo-cello arioso that becomes Jaqueline Kennedy Onassis's weaving leitmotiv through the show. In a stunning production, with stage and musical direction by James Dunn and Paul Smith, the company of players takes us initially on a wild ride in Andy Warhol's Factory, peopled by the likes of Grace Kelly and Elizabeth Taylor.

The closest that this libretto, by Wayne Koestenbaum, comes to traditional story-telling is the entrance of Jackie (soon to be "O"), followed close upon the heels by that of the decidedly unphilosophic shipping magnate Ari[stotle Sokrates] Onasis and diva extraordinaire Maria Calas. Onasis's extraordinarily smarmy tango I Am Curious Yellow (among the better known numbers of the work) sets the stage for a boy-dumps-opera-singer-for-ex-president's-wife scenario. 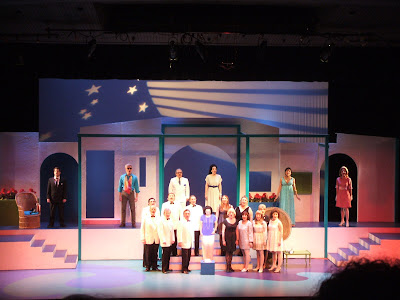 Among the curiously delightful musical effects, a crazy muted trumpet as a persisent telephonic ritournello (telephonello?), which suggests a possible re-uniting of Ari and Maria in Act II, yet ultimately calls the former offstage permanently upon the news of the death of his son, in a strangely empty recitative.

There is space throughout the work -- a spare chamber-ensemble quality expertly handled by the fine musical ensemble (including many players familiar over the years from appearances at The Mountain Play and other College of Marin evens). Daugherty shines in his pseudo-pop numbers and then takes the ear on a loop into art music realms, such that the overall effect is far from a Broadway musical, despite certain commonalities.

What sets the music and the drama apart are the risks: the willingness to go places that are simply not possible in the parlance of the popular. A traditional music drama tends not degenerate into delusional dream. A slam-bang ending is not denied in the ever-ascending stratospheric return of the plangeant violoncello. The effect is of a two-movement Unfinished Symphony of fast and slow, ending in a Greek-Mediterranean requiem.

The chorus was populated by beautiful people, too -- from the hippie chicks of the first act to the entourage of golden boys in the second, with striking sets and costumes by Ronald E. Krempetz and Patricia Polen, and welcome choreography from Sandra Tanner.
Posted by Mark Alburger at 10:00 PM