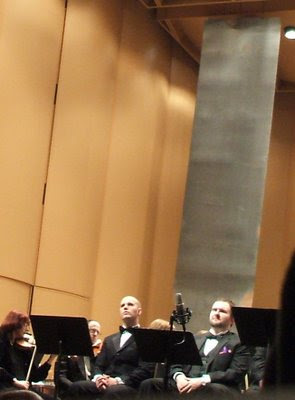 "Astound me!" said Sergei Diaghilev to Jean Cocteau, and that's we all want, right?

So it was nice to hear and see Michael Morgan and the Oakland East Bay Symphony, on March 20 at the Paramount Theatre, in a vibrant performance of that 19th-century operatic potboiler, Giuseppe Verdi's Otello (1887, Act I)

With a gigantic sheet-metal "thunder sheet" suspended from the stage ceiling, there was little doubt that the opening would deliver its requisite bang, and deliver it did, with peals of resonant brass, sonorous strings, wild woodwinds, and pounding percussion. Soprano Talise Trevigne (Desdemona), tenor Richard Crawley (Otello), and baritone Scott Bearden (Iago) were standouts -- the former two in their rapturous closing duet, and the latter in the hilarious, inventive, menacing drinking song which propels much of the interior section. Tenors Al Glueckert (Cassio) and Trey Costerisan (Rodrigo), and baritone Zachary Gorin (Montano) provided able support throughout, as did the impressive chorus, prepared by Lynne Morrow.

No costumes, sets, not even supertitles... yet the music drama came across in this concert version that brought to life to an important Verdi work that is not done often enough.. a music, after years of silence, which finds the composer in transition between his early "number" operas and the Wagner-tinged late output.

If there was something defiant about the lack of operatic trappings, so there was also about any pretentions of program unity, with a first half that, if it bespoke of any theme, offered a somnambulent contrast to the animation of the second.

The concert opened with an unexpected performance of F.J. Haydn's Symphony No. 49 ("La Passion") (1768) in a dispassionate account that emphasized the interstices between "period practices" and the "great tradition." Morgan conducted from the harpsichord, a continuo instrument not always specified in often-untrustworthy editions of mid-period Haydn scores. Like Dragnet's Joe Friday, this reading seemed to emphasize "the facts, ma'am," with much left to the imagination.

For the record, the movement listings, incorrectly inverted in the program booklet, are

Imagination was also wandering out there somewhere in Sala: Symphonic Elegy for Orchestra (2007), by Peteris Vasks. In contradistinction to John Donne, the Estonian composer finds that "Every single person is actually an island and this island is a source of sadness as well as of energy, power, and also of dramatics." Vasks makes his contribution to the quixotic 20th-century legacy of somber one-movement protracted meditations. If there is a hint of post-minimalism here, it is of the Eastern-European spiritualist stripe, rather than the high-energy American original. High lonely tremoli, a languid English horn solo -- you know the drill. A lovely brass chorale leads up to some profoundly cyclical musici interupti, and it all spins down again. Just the thank, you, ma'am, with a little thanks to Dmitri Shostakovich in the charmingly cryptic ending. Certainly a whimper, rather than a wham-bam, but this made the contrast with Verdian post-intermission that more astounding.
Posted by Mark Alburger at 9:30 PM