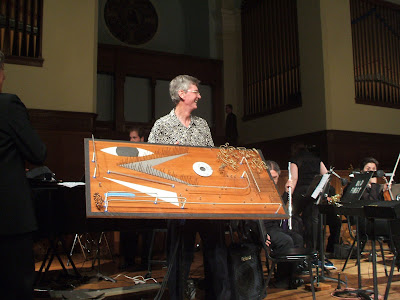 [Allan Crossman's Plasticity, a concerto for the San Francisco Composers Chamber Orchestra and Sonoglyph, the latter invented and performed by Tom Nunn [above])

We like to think that we live in the light, or as the current phrase goes -- "it's all good" -- when everything really seems to happen in the dark where angels are wrestled with. This came forcibly to mind when I caught the SFCCO's June 13 concert Restless Dreams at San Francisco's Old First Church. The program, of eight pieces by eight composers, also bore out music director Mark Alburger's from-the-stage-quip that it was Haydn's "Farewell" Symphony in reverse -- instruments were added instead of subtracted as it progressed. Restless Dreams also appeared to go from meditation to conflict, or light to dark.

Philip Freihofner's Obelisk, which the composer wrote over a long period and "finalized" for this concert, could be described as meditative and/or minimalist in gesture. We tend to think that only loud pieces are powerful, but Freihofner's soft one, which Rova Saxophone Quartet's Steve Adams played -- he was backed by a repeating figure on synthesizer -- with passion and point, hit home.

Lisa Scola Prosek's Voodoo Storm, performed here by clarinettist Rachel Condry, trumpeter Eduard Prosek, cellist Juan Mejia, and pianist Scola Prosek was delicate and expressive, with subtle yet highly individualized part writing -- Condry giving way to Eduard Prosek and vice versa -- and it ended, in mid phrase, as so much in life does.

Davide Verotta's Verso L'immagine Feroce, for larger forces under Martha Stoddard, with Verotta on piano, was poetic because it got under one's skin, albeit subtly. It also seemed to incarnate Verotta's concept of an "emotional state . . . that is completely beyond our grasp," and was a far more substantial and convincing piece than his last one, which the SFCCO played this winter.

Michael Cooke's piece was meditative in an entirely different way. His variations on Lu-Chuan Sheng's famous Taiwanese lullaby A Baby Sleeps, which had Gangqin Zhao on the plucked-but- much-smaller-than-a-koto guzheng and the composer on the impressive-looking black sheng -- a kind of mouth organ -- found him abandoning his usual bag of metric tricks for something simple and heartfelt, and Alburger led his sizable forces here with unobtrusive grace.

Loren Jones's Eagle Bear Woman and Two Islands, for a large ensemble conducted by John Kendall Bailey, was also of Asian inspiration, its second part being in Javanese/Balinese style. And there was a tremendously evocative interplay between the seen -- written notes -- and the unseen -- freely-improvised non-notated parts.

Allan Crossman's Plasticity, for Sonoglyph and Chamber Orchestra, was equally well-made. It also got lots of its expressive character from the divergent styles the composer employed. And it was very entertaining to watch Tom Nunn play his homemade amplified with contact mikes sonoglyph -- an electro-acoustic percussion board -- while the orchestra watched him (this was a sort of concerto) or dug into their parts.

Alburger's always a surprising composer and his three-part King David Suite (The Young and The Restless) provided a series of pleasant jolts. The composerr likes to base his pieces on ones by other composers -- he calls their musical structures grids, and the grid, or scaffold here was Arthur Honegger's 1929 cantata Le Roi David which Alburger wreaked gleeful havoc on -- he changed its metric and tonal make-up and addied discreet but pungent decorations to the original's lean and mean neo-baroque style. Alburger's take on the soap-opera goings-on of this part of the Hebrew Bible -- 2 Samuel -- had the added virtue of being transparently scored, and his orchestra was right on the money throughout.

Restless Dreams reached its literal climax with Erling Wold and fognozzle's In the Stomachs of Fleas, which the composer in his hilarious onstage intro said was a baldly programmatic piece -- he mentioned Hector Berlioz's 1830 Symphonie Fantastique, which has just about everything, including a witches' sabbath. Wold and fognozzle's scenario, which had rats spreading the plague in 1899 San Francisco was even more extreme. Granitic chords assaulted the ear, and the volume -- fognozzle's part was amplified -- made it sound as loud as Varese's Ameriques (1918-21), but not as much fun. Still, this was an impressive piece, with the SFCCO, under Alburger, at full bore. And the spectacle of a lightshow, manned by in-the-pews-behnd-the-altar fognozzle on way-loud electronics cum SFCCO, made a thunderous but not exactly joyful noise.