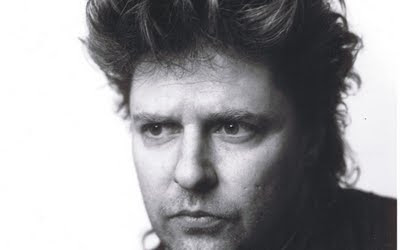 Glenn Branca's The Blood. P.S. 1, Long Island City, New York, NY. "Branca’s sextet took a little time to establish the Stomp, but after a few minutes it arrived. Most of the scores Mr. Branca has composed for his electric-guitar ensembles contain parts for bass and drums too, and the Stomp makes its appearance, as reliable as the other parts are shifting. The Stomp is a four-four thump, straight from the garage. When the music gathers its prickly-heat tension, various guitars modulating at odds with one another and at least one playing steady drone chords, the Stomp becomes more stylized: a kind of rock habanera beat. If you have ever been shaken by some of Mr. Branca’s electric-guitar music -- symphonies and shorter works -- you have [perhaps] depended on this beat to carry you through it. Mr. Branca does too. When the beat showed up . . . Branca, who conducted the ensemble at the head of the stairs in the courtyard of P.S. 1, in Long Island City, Queens, casually moved his hips, then his knees, locked together. Halfway through the performance he stood with legs wide apart, bluejeans cuffs rolled up, heels pumping, pompadour falling. Near the end he was slumped over, grasping the top of his music stand, rubbing his face in the score paper, still moving a leg. The Blood is brand new and Lesson No. 3 (Tribute to Steve Reich), the other piece played . . . comes from 2006. Both were written for a band of four guitarists, a bassist and drummer, the same size group as on Mr. Branca’s record The Ascension, from 1981. The return to a small ensemble is a deserved victory lap; his old music has endured, and still sounds great. It’s also a blow scored for the power of simplicity, after his 13th symphony, Hallucination City, first played in 2001, which used 100 musicians. The pieces performed Saturday show that his basic idea is strong enough that it doesn’t necessarily need a villagefull of players to make its point. The Blood, the longer of the two pieces, alternated unison simplicity with harmonic discord. At the beginning the guitarists jumped octaves together. In a slower section the guitarists played chords in dissonant, staggered patterns (and Mr. Branca lighted a cigarette). Then they worked together again, climbing upward in semitones. Toward the end he conducted some improvisations, telling guitarists where to go and how loud to play, before ending the piece in concordance, the drums accelerating to a sudden punk ending. Mr. Branca’s music is New York to the core, or at least what some New York art was around 1981: hard earned, abrasive, frequently awesome" [Ben Ratliff, The New York Times, 9/6/09
Posted by Mark Alburger at 9:00 PM