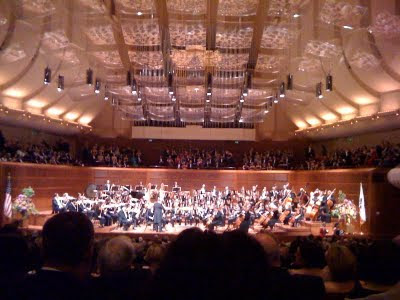 It was festive. It was dark. It was the 2009 Opening Night Gala of the San Francisco Symphony, and Music Director Michael Tilson Thomas -- rarely one to provide simply an easy music- appreciation course for the the well-dressed but perhaps rarely-attending-otherwise crowd -- was up to a few old tricks.

Of course, it was all about sex, or at least sensuality, so that helped. Dance music in general, and waltzes in the case of the trio of works heard before intermisson, spring from courtship and display -- concepts that definitely had aural and visual realizations through the course of the evening.

The program? Yes, the program on September 9 at Davies Hall: Franz Lizst's Mephisto Waltz No. 1, Maurice Ravel's La Valse, and Richard Rodgers's Carousel Waltz, followed by a spectacular reading of the Sergei Prokofiev Piano Concerto No. 3 from Lang Lang.

The Lizst, the oldest man of the program, feels nevertheless contemporary in its dangerous, showboating unpredictability. Surely Thomas connects with this dashing 19th-century, intellectual-yet-sensual entertainer/virtuouso/composer, and the reading felt Faustianly fecund, at the edge of the improvisatory.

Ravel's Valse has always been a symbol of decadence and destruction, and was so here. At the same time, it's the product of a composer who never left a note out of place and always maintains his sophisticated craftiness -- even when the wine glasses are over-full. In this context, the Rodgers Carousel felt totally appropriate: this is not music simply for a pops concert, this is concert music among the best.

If the repertory survivors of 20th-century music come from unlikely sources, this is underscored by Prokofiev outrageous circumstances of time and place. The third piano concerto found the composer on the coast of Brittany producing at once one of his most traditional yet innovative works. The piece dances and flies along, particularly under the flamboyant fingers of the likes of Lang, and the musical argument is crystal clear: beautiful, sardonic, surprising. Not a piece for white-people-who-pretend-to-like-classical-music (a concept put forth in an SF tabloid) to sleep to -- indeed, cumulative attention seemed fixed and rapt. The strange anticlimax of a solo Chopin encore did nothing to tamp down the accumulated energy. Imagine how stunning the night would have additionally been with a 21st-century composition, in addition to great 19th- and 20th-century music, in the mix!
Posted by Mark Alburger at 9:00 PM