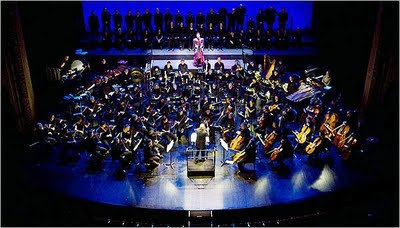 Philip Glass's Kepler. Brooklyn Academy of Music, New York, NY. "In Galileo Galilei, his 18th opera, from 2001, he used scenes from the life of the astronomer and mathematician to examine the fraught relationship between science and religion. . . . [The E]ssence [of Glass's 23rd opera, Kepler,] is strikingly familiar: he uses scenes from the life of another astronomer and mathematician -- a contemporary of Galileo, each having straddled the 16th and 17th centuries -- to examine again the relationship between science and religion. The issues are less fraught this time, but still weighty and tangled. In both works the scientists expound on the theories that made them famous, and that can make for some dry moments in the opera house. When, for example, Kepler asks, 'Is it cold that gives snow its starry shape?' and then ponders the question from several angles, or when he explains the scientific method ('First, we pose our hypothesis') and his theories of how the planets’ orbits are shaped, chills do not run up your spine. Galileo, at least, had its protagonist’s persecution by the church to deal with, and Mr. Glass wisely included an Inquisition scene. The most dramatic moment in Kepler, which has a libretto by Martina Winkel drawn largely from Kepler’s writings, is his accounting of his own character flaws, and how he made enemies of most of his colleagues. Not that we meet those colleagues, or see their animosity in action. Kepler is the only named character; the six other soloists are Soprano 1, Soprano 2 and so on down the vocal ranges, and although several have brief moments in the spotlight, they mostly work as a chamber choir. The performance was described as a concert staging. The soloists and the larger Choir of the Upper Austrian State Theater, from Linz, marched on and off the stage regularly, reconvening either behind the Bruckner Orchestra Linz or in front of it. As Kepler, Martin Achrainer, wore a patchwork leather coat and walked around the stage looking thoughtful, troubled or dour. Maybe the biggest problem with Kepler is that it is called an opera. As an opera, it is exceedingly nondramatic. But as an oratorio, it works brilliantly. Oratorios allow for the presentation of ideas without the expectation of action. And the ideas here -- not least, Kepler’s almost continuous struggle to show that science and religion are separate, noncompeting realms, and that his discoveries are not a disavowal of God -- are worth exploring. They are even timely, given the increasingly corrosive debates about evolution and creationism. At one point Kepler argues that the church should treat literalist readings of the biblical creation story as a form of heretical abuse. Mr. Glass’s score includes many of his trademark moves: the repeating chords on a foursquare beat, as well as with syncopations of various kinds, usually in minor keys; the scale figures and arpeggios (now increasingly angular); the swirling string and flute effects; and the use of a minor third as an engine of sorts. There is no chance you’ll be wondering who the composer is. But Kepler offers quite a few novel touches as well, including a colorful use of pitched percussion instruments and hollow blocks, often paired with rumbling bass lines. Mr. Glass’s vocal writing is more varied that it once was: Mr. Achrainer’s first aria takes him nearly to the high and low extremes of his range, a test he handled beautifully, and the choral writing includes several vigorous pieces, including a few biblical settings. Dennis Russell Davies, unquestionably Mr. Glass’s most eloquent interpreter these many years, kept the musical focus on the work’s novel touches, and on the beauty and power of the vocal writing" [Allan Kozinn, The New York Times, 11/19/09].

Riccardo Muti conducts the New York Philharmonic in Edward Elgar's In the South (Alassio), Franz Liszt's Les Preludes, and Sergei Prokofiev's Romeo and Juliet Suite. Avery Fisher Hall, New York, NY. "As always, the musicians played extremely well for him. Mr. Muti is a major musician. Alan Gilbert was ultimately the choice for music director, and I can only hope that the players now feel as positive as I do about the current state and the future of their orchestra. I would go further and say that part of the excellence of the performances Mr. Muti drew from the musicians here stems from the good work Mr. Gilbert has done so far. The technical finesse that Lorin Maazel fostered is still there. But the players seem more relaxed and empowered. Though not as controlling as Mr. Maazel, Mr. Muti is a meticulous conductor who, at his best, brings an unusual blend of Italianate intensity and cool authority to his performances. That mix proved ideal in a rarity, Elgar’s concert overture In the South (Alassio), composed in 1904, a work the Philharmonic had not played in 22 years. Elgar, the leading composer of Edwardian England, wrote this impassioned, restless piece while traveling in Italy. It opens with a bustling, almost giddy burst of swirling strings, exuberant brass and overlapping phrases. But as James M. Keller points out in his program notes, the inspiration for this extended passage was not the Italian countryside. The music comes from an earlier piece called Dan Triumphant (After a Fight), written in honor of a dog. Yet there are wistful flights that seem touched with Italian lyricism, nostalgic passages beautifully scored for veiled strings and whipped-up sections that never turn frenzied, at least in this commanding performance. At 20 minutes, the piece is a little long-winded. But I thought that only after the fact. During the performance Mr. Muti and the inspired players had me hooked. The concert began with a stirring, lushly colored account of Liszt’s episodic symphonic poem Les Préludes. Mr. Muti captured the ruminative quality of the mysterious opening, so redolent of Wagner, and ended with a triumphant final section. The music making was joyous and vigorous without a trace of empty pomp. Mr. Muti drew brawny yet subtly detailed playing from the orchestra for the final work, selections from Prokofiev’s Romeo and Juliet ballet score. The performance, while brilliant, was no revelation. It is not as if the Philharmonic under Mr. Muti were finally showing what it was capable of. Still, he will figure prominently in the concert schedule during the Gilbert years, as he should" [Anthony Tommasini, The New York Times, 11/20/09].

Death of John [Anthony] Storm Roberts (b. 2/24/36 London, UK), of complications from a blood clot, at 73. Kingston, NY. "[He was] an English-born writer, record producer and independent scholar whose work explored the rich, varied and often surprising ways in which the popular music of Africa and Latin America informed that of the United States . . . . Long before the term was bandied about, Mr. Roberts was listening to, seeking out and reporting on what is now called world music. He wrote several seminal books on the subject for a general readership, most notably Black Music of Two Worlds (Praeger, 1972) and The Latin Tinge: The Impact of Latin American Music on the United States (Oxford University, 1979). Black Music of Two Worlds examines the cross-pollination -- in both directions -- between Africa and the Americas, from the influence of African music on jazz, blues, salsa and samba to the popularity in Nigeria and Zaire of American artists like James Brown and Jimi Hendrix. In writing the book, Mr. Roberts sought to connect a diffuse web of existing studies by ethnomusicologists. The studies typically appraised local musical traditions while ignoring the reach of Africa as a whole. 'It was like a landscape with a large number of artesian wells, and nothing linking them,' he told The New York Times in 1992. 'And I conceived of Black Music of Two Worlds being more like canals joining.' In The Latin Tinge, Mr. Roberts trained his ear on the influence of musical forms like tango, rumba, mambo and salsa on a wide range of American pop styles, among them ragtime, Tin Pan Alley, rhythm and blues, jazz, country and rock. Reviewing the book in The New York Times Book Review, Robert Palmer called it a 'painstaking, pioneering' work, adding: 'The Latin Tinge is an important addition to the literature of American music. . . [Roberts's] father, an accountant who often traveled abroad on business, brought him records that were then scarcely available in England: jazz and blues from the United States, Brazilian music by way of Portugal and much else. By the time he was in his early teens, John was irretrievably mesmerized by the sounds that leapt from his turntable. A polyglot who came to speak more than half a dozen languages, including Swahili, Mr. Roberts received a bachelor’s degree in modern languages from Oxford University. In the mid-1960's he spent several years in Kenya as a reporter and editor on The East African Standard, a regional newspaper. Returning to London, he was a radio producer with the BBC World Service. Mr. Roberts moved to the United States in 1970, becoming an editor on the periodical Africa Report. He was later a freelance journalist, contributing articles on world music to The Village Voice and other publications. In the early 1980's, Mr. Roberts and Ms. Needham started Original Music, a mail-order company that distributed world-music books and records. In those pre-Internet days, Americans outside big cities found these almost as hard to come by as young Mr. Roberts had in postwar England. In business for nearly two decades, Original Music also released many well-received albums of its own. Among them are The Sound of Kinshasa, featuring Zairian guitar music; Africa Dances, an anthology of music from more than a dozen countries; and Songs the Swahili Sing, devoted to the music of Kenya, an aural kaleidoscope of African, Arab and Indian sounds. Mr. Roberts’s first marriage, to Jane Lloyd, ended in divorce. Besides Ms. Needham, whom he married in 1981, he is survived by two children from his first marriage, Stephen and Alice Roberts; three stepchildren, Melissa, Elizabeth and Stephen Keiper; two grandchildren; and three step-grandchildren. His other books include Latin Jazz: The First of the Fusions, 1880s to Today (Schirmer, 1999) and A Land Full of People: Life in Kenya Today (Praeger, 1968). In choosing what to release on the Original Music label, Mr. Roberts did not disdain modern, popular numbers: by his lights, a song simply had to be good. This distinguished him from musicological purists who, in ceaseless quest for the authentic, recorded only material seemingly untouched by modernity. In an interview with The Los Angeles Times in 1987, Mr. Roberts illuminated his selection process. 'I don’t care how esoteric it is, but it’s got to be terrific,' he said. 'Not this ‘you-can’t-hear-it-and-it’s-terribly-performed-but-it’s-really-very-interesting-because-it’s-the-only-winkle-gathering-song-to-come-out-of-southeastern-Sussex’ attitude'" [Margalit Fox, The New York Times, 12/10/09].
Posted by Mark Alburger at 8:00 PM