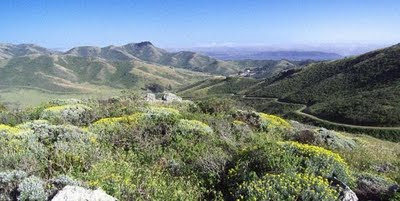 In interviewing Meredith Monk a while back, I asked her, "So what are you listening to?" Her response was, "Oh Mark, it's enough just to keep up with my own music!" And I must confess, I've been a bit out of the general loop this year, too.

But when Commuter Times Editor Doreen Burgin asked for "a year-end piece on the whole classical music picture in the Bay Area -- both some good things that happened this year and future happenings. You could include your programs" I leapt at the chance.

Google, of course. And draw on personal experience. So here goes.

Pianist Sarah Cahill started the year off right with A Sweeter Music, commissioning 18 composers to write pieces on the themes of peace and war, ranging from Jerome Kitzke's "There Is a Field, through Frederic Rzewski's Peace Dances, Mamoru Fujieda's The Olive Branch Speaks, Larry Polansky's B'midba, Peter Garland's After the Wars, and Preben Antonsen's Dar al-Harb: House of War, Terry Riley's Be Kind to One Another (Rag)," to offerings by Yoko Ono and the Residents.

By March, the season was in full bloom, when the Bay-Area premiere of Michael Daugherty's rompish Jackie O finally and wonderfully occurred, thanks to Paul Smith and College of Marin. The month also included the annual presentations of Charles Amirkhanian's Other Minds Festival, highlighted by the premiere of Ben Johnston’s The Tavern, plus Chinary Ung’s Spiral X: In Memoriam and works for cello octet by Mauricio Kagel and Arvo Pärt. Not to be outdone Michael Tilson Thomas cooked up an eclectic San Francisco Symphony mix (Gyorgy Ligeti’s Requiem, late-renaissance/early-baroque music by Giovanni Gabrieli, Maurice Ravel's Piano Concerto in G, and Franz Liszt’s Tasso), the Kronos Quartet presented a children's concert in Berkeley, Paul Dresher premiered his Schick Machine (for percussionist Steven Schick, directed by Rinde Eckert), and The Arditti String Quartet played at and with music by composers of Mills College, including Alvin Curran’s VSTO, Chris Brown’s Arcade, and Fred Frith’s Allegory.

If April slowed down in my mind, it was probably due to the revival of Henry Purcell's Dioclesian and San Francisco premiere of my Diocletian, with Harriet March Page and Goat Hall / San Francisco Cabaret Opera, at Noh Space.

Come what May, and activity was definitely heating up again, with the organization's Fresh Voices IX: Festival of New Operas and Songs. Three Evenings and One Afternoon in Hell: Or Is It Heaven?, in a cornucopia of music drama by Greg Bartholomew, Paul Siskind, Stefan Weisman, Nolan Stolz, Robinson McClellan, Jean Ahn, Gary Friedman, Cynthia Weyuker, Sheli Nan, Veronika Krausas (her award-winning Mortal Thoughts of Lady Macbeth), David Heuser, Lan-chee Lam, Chris Pratorius, Edward Knight, and Warren Gooch, plus my Sex and Delilah.

June proved a month of revivals and premieres, with San Francisco Opera resuscitating George Gershwin's Porgy and Bess, and SF Cabaret Opera doing the same for Gian Carlo Menotti's The Old Maid and the Thief, plus bringing to life the dead of both Zachary Watkins's desolate No Exit and Peter Josheff's evocative Inferno. San Francisco Composers Chamber Orchestra presented relatedly Restless Dreams, including the premieres works by Cooke, Alan Crossman (a wild concerto for instrument-inventor composer Tom Nunn's Sonoglyph), Jones, Scola Prosek, Verotta, and the Wold / fognozzle sound-and-light spectacular In the Stomach of Fleas and my King David Suite.

August is always a great time for musical vacations, and amongst the greatest continues to be Santa Cruz's Cabrillo Music Festival, which trumpeted the music of Osvaldo Golijov and Avner Dorman, and pounded away with the grace of percussionist Evelyn Glennie.

Before one could recover, the new season was upon us, as San Francisco Symphony and San Francisco Opera both provided their signature opening galas, the former with an eclectic all-most-all-20th-century program (Franz Liszt's Mephisto Waltz No. 1, Maurice Ravel's La Valse, Richard Rodgers's Carousel Waltz, and Sergei Prokofiev's Piano Concerto No. 3), and the latter with a very traditional Giuseppe Verdi Il Trovatore.

The Opera continued in October with a stunning revival of Richard Strauss's Salome at the War Memorial, which led to another Goat Hall Productions premiere, that of British-Netherlandish composer Patrick Dailly's Solidarity (with singing versions of Lech Wallesa, Pope John-Paul II, and Ronald Reagan live and onstage) at Flux 53 Theatre in Oakland. The Julliard String Quartet was also showcased, in Mario Davidovsky's Quartet No. 5, at San Francisco's Herbst Theatre.

The SF Chamber Orchestra refused to go quietly into that good night of post-Halloween November by conjuring up a Haunted House Science Fiction Quiz Show, cooing and howling in spells by Cooke, Freihofner, Scola Prosek, Gerhard Samuel (...night and trees), Wold, and present company's Elijah Ghost, at Oakland's Chapel of the Chimes. Other ghosts reigned with the Shanghai Orchestra at Berkeley's Zellerbach Hall, with Qigang Chen's Iris dévoileé.

On sober notes, in the entire 2008-2009 performance season, The San Francisco Symphony -- the Bay Area's flagship instrumental ensemble -- played only 10 works by American composers, by only six composers (Leonard Bernstein's five featured works equaled the total by others), four of whom are living, two of whom who live in the Bay Area, one of whom is not the conductor of the ensemble, none of whom is not a graduate student. San Francisco Opera -- ditto for Bay-Area music drama -- presented not a single American composer, let alone one living or local.

What wonders will the second decade of the 21st Century bring? Surely much more than Sex and the Bible, which premieres in March. But suffice it to say that there will be undoubtedly many musically earthy and spiritual joys to come!
Posted by Mark Alburger at 10:00 PM