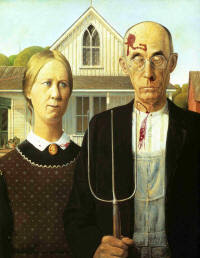 Artistic director Harriet March Page and composer Mark Alburger have long poured their energy and ingenuity into Goat Hall Productions and San Francisco Cabaret Opera. On June 17-20 at Berkeley’s Live Oak Park they held Fresh Voices X, their tenth annual festival of new operatic works. An accomplished mezzo, Page has kept one foot on the stage -- I once heard her sing the moving role of Maurya in Ralph Vaughan Williams’s Riders to the Sea -- while turning more towards directing and producing in recent seasons. Mate Mark Alburger handles musical direction and promotes experimental opera, coincidentally finding a vehicle for his own quirky works.

In recent years Dionysus by Steven Clark, Leonardo’s Notebooks by Lisa Scola Prosek, The Quantum Mechanic by John Bilotta, Inferno by Peter Josheff, and Mice and Men and Antigone by Alburger were among many of the jewels that this courageous couple premiered.

This summer’s festival consisted of two programs, X at the Heart of America, and X in the Soul of Europe and Beyond, ten one-act operas that balanced charm with the macabre. Each was fully realized, with accomplished singers and quick changing sets, and each offered a glimpse into a rarefied world, one that we are fortunate to have in our own backyard.

Offering a touch of much needed levity, George Bush: The Last 100 Days, written in 2008 by Chris Whittaker, was full of surprises, with Nathaniel Marken supplying a humorous portrayal of a Bush epiphany: “I changed my mind!” he sang, to the delight of the press and chagrin of his press secretary.

Composer/librettist duo John G. Bilotta and John F. McGrew premiered Trifles June 17, a cold tale of murder and injustice in the Midwest. Based on Susan Glaspell’s play of 1916, an abusive relationship is explored after a farmer is found hung. Two neighbors, played by soprano Maria Mikheyenko and mezzo Alexandra Jerinic, explored the subtleties of the crime while packing for the farmer’s wife, who had been arrested for murder. Their chemistry and fine voices added punch to the slow paced tension, peppered with clarinet trills and cello glissandi.

“I tell you it’s queer, Mrs. Peters,” sang Jerinic. “We live close together. And far apart.” Mikheyenko sang back of stillness and the death of her baby, capturing the isolation of that age.

Daniel Felsenfeld’s The Bloody Chamber reworked the Bluebeard myth, giving the ingénue more voice. But rolling a strawberry around on full, pursed lips, Jo Vincent Parks, voice thickened with lust, obviously relished his portrayal of the Marquis’s sensual evil. Indre Viskontas played his victim straight, performing a lovely aria as he undressed her. The creep factor was heightened by simple piano motifs that blurred as they overlaid each other.

Alburger, who describes his music as “post-minimal and post-popular,” wrote Job: A Masque as part of his continuing project on the Bible. Once described as a Pop/Stravinsky fusion, Alburger sampled melodies from Benjamin Britten’s War Requiem (in "Man is Born to Suffer"), and Ralph Vaughan Williams, but set those elegant motifs against popular rhythms for music that was provocative and surprisingly accessible.

The next night, and more sinister.

Medea Alone, by David Garner, was a virtuoso vehicle for soprano Kristen Brown, who alternately massaged her bloodied arms with a knife, and sent high notes pealing against cement block walls. Lovely glissandos and small carefully realized intervals balanced the ancient Greek plot of love turned to hatred and madness.

Mark Narins’s Theresa Kren was based on an unusual premise, a little girl whose death inspired the mother to resurrect her as a golem. The Jewish setting vied with Christian themes for an unsettling mix, but was saved by the arias, alternating folk and chazzanut motifs sung compellingly by Katherine Howell and Tristan Robben, with piano accompaniment by Keisuke Nakagoshi.

Based on a Kafka story, The Hunger Art, by Jeff Myers with libretto by Royce Vavrek, made Medea seem almost fetching. A narcissist “artist” and his co-dependant wife, jailed by three butchers in bloody aprons and fright wigs, re-enacted the Eve and apple tale -- but well after a bite of the Tree of Cynical Euro-Trash.

“We are but the vessels that Hunger weaves,” sang tenor Justin Marsh to soprano Eliza O’Malley, Alfonse to her Ivona. Stylish piano, played by Hadley McCarroll, and effective staging made this piece resonate.

Staged on a shoestring with the help of top musicians and singers, Fresh Voices is an astonishing display of artistic intention in an age of tightened belts, and a testament to the energy of Page and Alburger. Their future programs can be found at www.goathall.org.
Posted by Mark Alburger at 9:00 PM