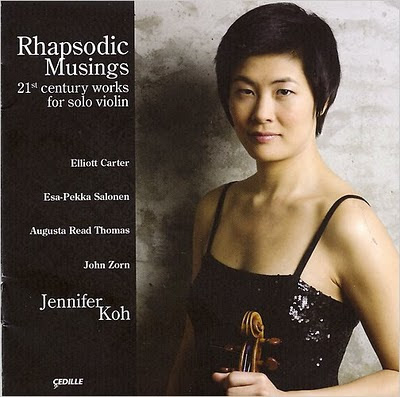 Jennifer Koh, Violin. Rhapsodic Musings: 21st-Century Works for Solo Violin. "Only four of the seven works on Rhapsodic Musings were actually composed in the 21st century, and that’s if you include the title track, composed by Elliott Carter in 2000. The earliest of Mr. Carter’s Four Lauds, the Riconoscenza per Goffredo Petrassi, dates to 1984, although the others, Statement -- Remembering Aaron (as in Copland) and Fantasy -- Remembering Roger (as in Sessions), were composed in 1999, a stone’s throw from the new century. But a listener can forgive Jennifer Koh the eagerness of her subtitle, given the incandescent readings she offers. The pieces were chosen, she writes in a program note, as part of her 'search for a sense of meaning in the days, months and years following the events of Sept. 11, 2001.' Ms. Koh’s selections are often as much about life as about death. Esa-Pekka Salonen’s Lachen Verlernt (2002) — inspired by the Prayer to Pierrot in Schoenberg’s Pierrot Lunaire, in which the speaker begs Pierrot to restore his lost (or unlearned) ability to laugh -- begins wistfully and grows into an intensely emotional score. Its fast chordal bowing suggests not so much regained laughter as the vigor of the search for a hopelessly lost power. Mr. Carter’s Four Lauds, like many of his recent multimovement scores, are disparate works assembled later into sets, though in this case each piece is a tribute to a colleague, and similarities of language and gesture help to bond them. Ms. Koh’s account of the Riconoscenza is particularly striking for its rich tone and its evocative touches of portamento. Her free, expressive vibrato similarly enlivens Pulsar (2005), a fluid fantasy by Augusta Read Thomas. And Ms. Koh makes the eight aphoristic movements of John Zorn’s Goetia (2002) into a magnificently varied, thoroughly unpedantic overview of contemporary violin techniques, in which playfulness and introspection mingle" [Allan Kozinn, The New York Times].

Milo: Works by Bridge, Britten, Turnage. Orchid Classics. "A web of musical connections among several generations of teachers, pupils and friends inspired this disc of works by three British composers, vividly interpreted by two other Britons, the cellist Guy Johnston and the pianist Kathryn Stott. Benjamin Britten was often inspired to write for a particular musician, like the tenor Peter Pears. The great cellist Mstislav Rostropovich was the beneficiary of Britten’s Sonata in C for cello and piano, given a vigorous performance here. Ms. Stott and Mr. Johnston play with witty panache in the pizzicato-driven second movement and with soulful intensity in the somber third movement, which displays Mr. Johnston’s rich tone to fine effect. Rostropovich described the fifth and final movement as 'irresponsible and tempestuous.' Mr. Johnston’s burnished and varied sound, aptly complemented by Ms. Stott’s sensitive playing, is also lovely in the gentle Spring Song and Mélodie by Frank Bridge, a friend and mentor of Britten’s, who championed his works. Britten described Bridge’s early style, illustrated by these two selections, as 'Brahms happily tempered with Fauré.' Bridge, who shared Britten’s pacifism, was profoundly affected by World War I. His melodic idiom veered toward a grittier aesthetic during the war, revealed in the two-movement Sonata in D minor for cello and piano, composed from 1913 to 1917. A restless cello line soars over the agitated piano part in the opening movement. Mournful musings in the piano at the beginning of the second movement reflect Bridge’s despair over the war. While writing this unjustly neglected sonata, Bridge suffered from insomnia and wandered around London in the early hours of the morning. A gripping performance by Mr. Johnston and Ms. Stott gives full depth to the work’s introspective, angst-ridden and melancholy moods. The disc also includes Sleep On, three lullabies for cello and piano by Mark-Anthony Turnage, who has said that they were influenced by Britten’s Solo Cello Suites Nos. 1 and 2. There is nothing soporific about these vividly textured lullabies, particularly the probing Refrain. Last on the disc is Mr. Turnage’s Milo, a lullaby named after his son. Mr. Johnston, Milo’s godfather, performed the gentle piece at the child’s christening in 2009" [Vivien Schweitzer, The New York Times, 10/29/10]. 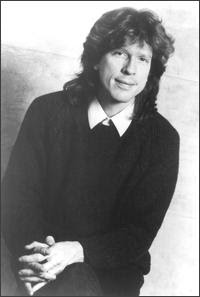 Rys Chatham. A Crimson Grail. Nonesuch. "[A] mammoth meditation for 200 electric guitars, 16 electric basses and percussion. . . . A Crimson Grail . . . lingers for long, hypnotic stretches on single, disarmingly simple ideas. . . . Chatham, who has been writing for electric-guitar ensembles since the late 1970s, composed A Crimson Grail for an all-night festival at the Sacré-Coeur Basilica in Paris in 2005 and reworked it in 2008, for Lincoln Center Out of Doors. The recording comes from a 2009 performance at Damrosch Park. . . . In this three-movement work’s outer sections, Mr. Chatham expands his guitar army from a small ensemble to a roaring swarm, in which the sound of 200 picks on amplified steel strings creates a tactile, prickly surface. In the opening movement, overtones and shifting balances create an illusion of faint melodies. Mr. Chatham gives listeners more to work with in the finale -- power chords, rhythmic counterpoint and rising scale figures -- and his central slow movement is built of a wave of guitar chords that fade in and out in a hymnlike progression, suggesting a wheezy harmonium. Yet the work’s greatest allure is in passages where melody, harmony and rhythm are virtually absent, when all you hear is the visceral roar of plucked strings" [Allan Kozinn, The New York Times, 10/29/10].

So Percussion and Matmos. Treasure State. Cantaloupe. "[A] collaboration between the instrumentalist-composers of So Percussion and the electronica group Matmos. [A Crimson Grail and Treasure State both] draw in varying degrees on the notion that sound trumps content as the most crucial element of a composition. This is a time-honored idea in a particular corner of the avant-garde where conventional elements like melody, rhythm, harmonic movement and phrase structure are regarded as less fascinating than timbre, texture, duration, volume and intensity, particularly when these qualities change slowly, if at all. Mr. Chatham’s work and the So-Matmos collaborations are by no means uneventful. . . . [The] Treasure State pieces . . . use timbre so seductively that everything else seems secondary. Together these pieces tell us a lot about how a listener’s inner ear will create a narrative, supplying hints of melody and development even when the music appears intent on avoiding or at least minimizing them. . . . So Percussion and Matmos are ideal collaborators in the sense that each group provides part of the sonic arsenal necessary to create the eight otherworldly vignettes on Treasure State. Minimalist melodic cells, often played on music-boxy combinations of glockenspiel and piano or vibraphone, run through these imaginative pieces, and sometimes

-- in Needles and Cross -- dancelike figures emerge. But the attraction here, and the unifying undercurrent, is the combined group’s constantly shifting, variegated texture. Its instrumentation includes typewriter, amplified cactus, fish toy, animal sounds, splashing water and paper being crinkled, along with guitars, trumpets, So’s percussion instruments and Matmos’s samplers and synthesizers. The works’ thematic cells may catch the ear. But it is the arrangement and imaginative juxtaposition of familiar instrumental timbres with splashing, crinkling and other exotic noises that makes these pieces so irresistible and entrancing" [Allan Kozinn, The New York Times, 10/29/10].
Posted by Mark Alburger at 6:00 PM