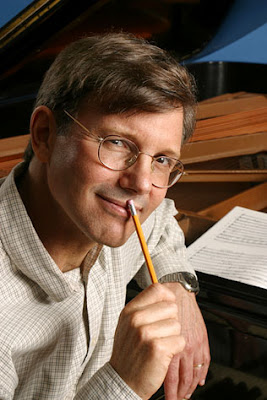 Upon learning about the Marin Symphony's Golden Gate Opus project, a question leapt to mind: "Why not a northern California composer?", given the wealth of top composers in this area, including John Adams, Paul Dresher, Terry Riley, Erling Wold, and Pamela Z -- to name a few. But, virtually from the moment of meeting New-York-based Rob Kapilow, at San Rafael's Embassy Suites, amid a brouhaha of cameras and lights (the first part of our interview was filmed), the sense was that this energetic and youthful composer, who belies his 1952 birth date, is a fine choice to write a large-scale work soliciting community input, celebrating the 75th anniversary of the Golden Gate Bridge. Almost immediately he spoke enthusiastically of Steve Reich's use of found sounds in City Life (1995).

KAPILOW: Real-world sounds are definitely a part of the project. The sound-effects guy from Prairie Home Companion, named Fred Newman, is a collaborator with me. Chorus is part of the project, and orchestra is part of the project, and we're still figuring out how it all fits together. Everybody knows what the Golden Gate Bridge looks like, but what does it sound like? We've been asking pretty much every group we go to -- "What are the sounds you associate with the Bridge?" And we've had some pretty amazing conversations with people. Phenomenal.

ALBURGER: And you're filming these conversations.

KAPILOW: The same film group followed around a symphony that I did for the Lewis and Clark Bicentennial. And that became a PBS documentary that aired nation-wide last year.

ALBURGER: Did you write the piece recently?

KAPILOW: The idea is similar in the sense of following around the piece from its first beginnings. I call these City Pieces -- pieces where I pick a topic that engages a city.

ALBURGER: Despite the fact that this is a semi-natural, semi-manmade setting. Well, obviously, the Bridge itself...

KAPILOW: One of the questions is "Who's Bridge is it?" I mean, it's not Marin's, it's not San Francisco's. But it's also the world's. The idea is to engage the community as I'm writing it, from beginning all the way through the final stages.

ALBURGER: Another question you raise is "What is the community?"

KAPILOW: That's the thing. One of the things we've discovered, is, what every you think it is, it's bigger. One of the kids' suggestions that kept coming up over and over again about sounds associated with the Bridge is all the foreign languages spoken on the Bridge. And it's very clear that it's the world's Bridge.

ALBURGER: Have you walked the Bridge?

KAPILOW: Oh, yes. And we're doing many version of the Bridge.

KAPILOW: Yes, Claudia Nakagi is a sound archivist who's been out here. She has archival sounds of the Bridge recorded over two generations. So she is feeding us all the raw sounds -- giving them to Fred and me, and we're going to work them into this piece.

KAPILOW: Somewhere between 20 and 30 minutes.

ALBURGER; Would the musique-concrete portion of this be thorough-going?

KAPILOW: That's part of the fun of this project, is to go out to people in the city. One of the other goals of the project, of course, is to demystify composition, and to remove whatever barriers people might think there are, and to get people to understand that writing a piece is no different than writing anything else. So, I want people in at the very first stage when I'm asking them, "What does a piece of music about the Golden Gate Bridge sound like?" Then I will keep coming back. Also we have a Facebook site called Golden Gate Opus, and we're asking people to talk to us, offer thoughts. As I write the piece, I will put up bits of it as it gets written.

ALBURGER: Cool. Anyone whistling melodies for you?

KAPILOW: Absolutely. In fact, I met with the Youth Symphony and also the Marin School of the Arts. We had them doing some samples, and playing some ideas, doing some improvisation of fog horns and fog and wind. I wanted them to get a sense of what it's like to engage in the question of "What does a piece about the Golden Gate Bridge sound like?"

A Google search of Rob Kapilow reveals a similarly brilliantly engaging speaker in national television forums, but paradoxically very little composition -- so we shall just have to wait in greatest expectation for the conclusion of this project: a new work premiered on each side of the Gate, commemorating the 75th Anniversary of the Bridge in May, 2012.
Posted by Mark Alburger at 10:00 PM