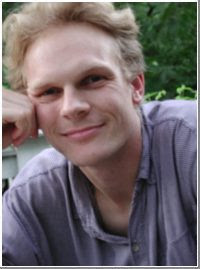 Nathaniel Stookey is the composer of the hour. With a growing list of compositions that includes The Composer Is Dead with Lemony Snicket, Junkestra for found percussion, and incidental music to Bertolt Brecht's The Caucasian Chalk Circle -- Stookey has struck it rich again with a brilliant Zipperz, characterized as a "soaPOPera." Dan Harder's "zipper" poems provide the libretto, presenting a love story simultaneously from the perspectives of both lovers, in interlocking lines that yield third meanings when combined. This is perfectly reflected in Stookey's contemporary counterpoint, engagingly realized by the versatile vocalists Robin Coomer and Manoel Felciano, with the Marin Symphony on March 15 at Veterans Auditorium. Stookey again writes colorfully and naturally for the orchestra and voices, finding humor, power, and poignancy in a tale that was splayed on each side of the intermission (Act I: 1. Meeting, 2. Waiting, 3. Waiting; Act II: Coming Together / Coming Apart). If there were hints of minimalism and Frederick Rzewski (the Coming Together synchronicity), it was probably through the common coin of the vernacular.

The freshest program that this ensemble has produced in recent years, one can only hope for more progressive concerts from conductor Alasdair Neale and the gang to come along similar lines.

The presentation was rounded out by Leonard Bernstein's always shining Symphonic Dances from "West Side Story" and a roster of six choruses from various 19th-century operas: in order, Richard Wagner's "Procession and Chorale" from Die Meistersinger, Giuseppe Verdi's Chorus of the Hebrew Slaves and "Anvil Chorus" respectively from Nabucco and Il Trovatore, Ruggero Leoncavallo's "Bell Chorus" from Pagliacci, the lovely Wagner "Bridal Chorus" from Lohengrin, and a rousing "Polovtsian Dances" from Prince Igor. The Marin Symphony Chorus was in full voice against the lushness of the orchestra, and a good time was had by all.
Posted by Mark Alburger at 9:00 PM