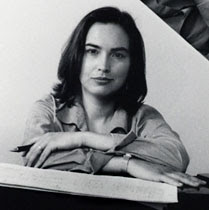 Belinda Reynolds is a Bay-Area postminimalist composer who serves as Vice-President of the Common Sense Composers' Collective. I rendezvous'd with Belinda at her viewful San Francisco aerie, which she shares with her composer-husband Dan Becker and daughter, on January 19, 2011.

ALBURGER: (holding a copy of Reynolds's Custom Made Music: Twelve Pieces for Piano Duet) Is this something you're doing more of now?

REYNOLDS: It's always been....

REYNOLDS: Yes, well, that's part of it. It's something that has been around always in the background. While I've been writing as part of the Common Sense Composers' Collection for professional ensembles, I have been also been writing for young players since graduate school. It's just a fluke that started, and it's something that I'm really passionate about, because there's just very little music for amateurs or beginners or intermediate levels written by composers of our background.

REYNOLDS: And how do we expect the next generation to play our music, but if they aren't exposed to it at a younger level, they're going to be inhibited by it, and it's going to be a tougher sell. So, if we really want things to happen, composers need to write. And most of us aren't trained to write for younger players.

ALBURGER: We're all shooting for the top end, so to speak.

REYNOLDS: Exactly. Exactly, but, you know, it was always part of our craft, from Bach to Bartok to Stravinsky. Everybody...

ALBURGER: Wrote for kids. Le Cinq Doigts and the Bartok Mikrokosmos and For Children...

REYNOLDS: Exactly. Exactly, but something, particularly in American music in the last 30 years, people just don't do it, really.

ALBURGER: It could be the last 50.

ALBURGER: That's right. And you want to get your academic grants -- perhaps there was a thought that there was no money in "the little sell." You've written children's music through your whole career.

REYNOLDS: In graduate school, like many of us, I was putting myself through by teaching at a local music school. The people there found out that I was a composer, and one of the teachers asked if I'd write for the fifth-grade choir, and I had no experience doing anything like that, but I used the process of collaboration. I worked with the students over a period of months. I found out their technical limitations, and also their openness. We all created little melodies, and from that I composed a set of choral pieces that worked wonderfully.

ALBURGER: So it was collaborative with the kids.

ALBURGER: Very cool. What year was that?

REYNOLDS: '92. I found out a number of things. The kids loved doing it. The teacher loved it; in fact, she started a commissioning program with other composers. The parents loved it; they wanted to find out about more music outside the kid's realm. So, a new fan base, so to speak, of enthusiastic open minds. I was hooked. Since moving out here, I have continued to teach privately composition and piano, and I started writing duets for each of my students.

ALBURGER: What a side benefit! That's great!

REYNOLDS: Yes, and they were customized to each of their technical levels as well as their personalities. And I had played the teacher part.

REYNOLDS: The students loved them. Each of the pieces has a pedagogical role, and the set progresses from five-finger positions to late intermediate works. Not only did the kids love learning their own, but they wanted to learn the other duets, and they also wanted to learn other living composers' music.

REYNOLDS: So it really opened up a realm for them, and also a realm for me. And other teachers actually started wanting me to write for their students. So a little cottage industry began. And so over the years, along with my commissions getting bigger for professional ensembles, word got out that I liked writing for students, so I wound up getting commissions for those kind of pieces, too. My first big one along those lines was for the San Francisco Conservatory of Music. They hired me to write for a string ensemble that had only been playing for two months: fifth graders.

ALBURGER: Ho-ho. A challenge up to Benjamin Britten and Ralph Vaughan Williams....

REYNOLDS: Oh! It was something!

ALBURGER: It is quite an art.

REYNOLDS: It is an art. And I also worked with the young teachers, in helping the students learn the piece.

ALBURGER: Do I love that idea! I have "Mary Had a Little Lamb" Variations, but not Twinkle, Twinkle... I have to check this out!

REYNOLDS: It was really easy for the kids to learn, because it was in patterns. They didn't have to be reading music...

REYNOLDS: They were just beginning to learn. This was public school -- weekly lessons -- in the projects.

ALBURGER: This was an outgrowth of the Conservatory, but these were not Conservatory students.

REYNOLDS: It was an outreach program. SFCM had gotten a huge grant from Texaco to do this. From that, I started getting other commissions for youth orchestras. Working with the Marin Youth Orchestra, I wrote a late-intermediate-level piece. I did a big Meet-the-Composer Residency with the Denver Young Artists Orchestra, which is on the technical level of the San Francisco Youth Symphony. That was a wonderful year-long project, in which I went out there five times, and not only wrote them a piece -- in which we did workshopping (just like we do with Common Sense: I brought things in process, and got their feedback; the students loved that) -- but, in addition, I had a composition group. Twelve of the kids wanted to learn how to compose. So, over the process of that year, we started with each of the students writing eight to sixteen bars of a melody.

REYNOLDS: Exactly. And learning how to make their beginnings into a polyphonic string quartet. It was a wonderful process of each playing each other's melodies, and giving suggestions -- learning about augmentation, canons, and so forth...

ALBURGER: Harmony as well as counterpoint, I assume...

REYNOLDS: Oh, yes, all of that. Through a very creative, organic process, in which they had ownership. By the end of that process, we came up with a dozen five-to-eight-minute string quartets that really were of the collegiate level. Twelve to sixteen-year-old kids. So I love teaching. I've done those things, but, at the same time, have had larger commissions happening with other ensembles. The most recent coming up is with Paul Dresher.

REYNOLDS: Thanks. But as this has continued, I've just realized, there's just not music out there...

ALBURGER: ...for the young. And it's true. In my youth, kids were coming up the ranks being familiar with popular music and only older classical music....

ALBURGER: So you're changing that!
Posted by Mark Alburger at 10:00 PM