Good and Evil with Behzad Ranjbaran 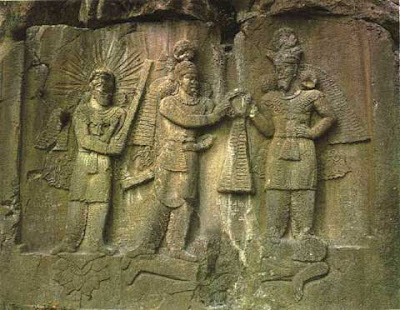 Behzad Ranjbaran is an Iranian-American composer who teaches at the Julliard School of Music in New York. I caught up with him at the Four Points Sheraton on May 1, 2011, just before a performance of his Mithra, with the Marin Symphony.

ALBURGER: Perhaps you can tell us about Mithra.

ALBURGER: How did you get connected with the Magnum Opus Project?

RANJBARAN: I received a call from Meet the Composer that I had been award one of the grants from Kathryn Gould.

ALBURGER: Just out of the blue.

RANJBARAN: It was a very generous gesture towards promoting new music. I was very happy to accept the offer, which involved performances with three orchestras.

RANJBARAN: And Santa Rosa, which was where the premiere occurred last year. I think this should be a model for the rest of the country: to initiate large works, not just for one orchestra, but several at once. I'm very happy that a number of performances are happening here. Next year the Philadelphia Orchestra is going to bring my Saratoga for the centennial of the San Francisco Symphony.

ALBURGER: Assuming the Philadelphia Orchestra's still in existence, what with the bankruptcy.

RANJBARAN: That is just a phase to reorganize their finances. I assume that will be short term. And also, this summer, Cabrillo Festival will bring my Piano Concerto here. I am discovering the beauty of this area, and seeing what a fertile ground it is for music and art. People love to nurture quality, whether it is music or art or wine. This area reminds me of the city of Shiraz, which has a similar climate. It is famous for, obviously, Shiraz wine, which dates back several thousand years. It was there that the concept of paradise was developed! The San Francisco Bay Area also reminds me of the wine and the paradise! I feel very much at home.

ALBURGER: Are you from Shiraz?

RANJBARAN: I was born in Tehran, but I went to Shiraz in my younger years. I wrote a chamber piece, that is becoming popular, called "Shiraz" Piano Trio.

ALBURGER: Mithraism seems to offer a spin on paradise, too.

RANJBARAN: It does. It is one of the early believe systems, and the more I read, the more fascinated I became. My connection to Mithraism is very personal. In Iran, "mithra" and "mihr" are very interchangeable. "Mihr" is the aspect of Mithraism that represents "love," "affection," and "obligation." When men and women marry, the obligation is called "mihr." If you have affection for someone, this requires obligation. It's a beautiful tradition. And the seventh month of the Iranian calendar is called "mihr," and my older brother was born in that month. Mithraism is a fascinating belief system that was very popular from India all the way to England for an extended period of time, until Christianity took over. The idea of resurrection, the concept of drinking wine and eating bread.

RANJBARAN: So, a lot of these traditions influenced Christianity -- although the Roman concept of Mithraism was very different from the Persian origins of the religion. And Mithrasism was never unified the way Islam or Christianity was. But it influenced Zoroastrianism, Judaism, Christianity, and Islam -- a common heritage for all these cultures, all these religions. That, to me, is a message of universality: that we are all connected; that we are all one.

ALBURGER: How does this work out in the music?

RANJBARAN: I tried to explore three aspects of Mithra in the piece, as three sections: interrelated and connected. A continuous piece of music. The first part is very meditative. It features the solo flute, inspired by the Persian ney. I always felt that the bamboo flute is the most universal instrument around the world. From thousands of years ago, it was natural to express one's feeling through the bamboo flute.

ALBURGER: Performed on a metal flute! What kind of accompaniment? Drone?

RANJBARAN: Harp, which, in ancient times, was the instrument that accompanied reciting poets.

ALBURGER: You're buying into ancient music traditions. What about more contemporary Persian influences?

RANJBARAN: All the melodic characters, rhythms, and improvisatory features are inspired by Iranian models, although I never use traditional Persian melodies -- rather more subtle allusions, rather than imitation.

ALBURGER: What about the second section?

RANJBARAN: More aggressive and rhythmic, representing the battle of Mithra in overcoming evil. We have that eternal conflict. Mithra represents the goodness in humans.

ALBURGER: What's the bad side in Mithraism?

RANJBARAN: Mithra overall is all good.

ALBURGER: But is there a personification of evil?

RANJBARAN: We call it "Satan."

ALBURGER: Not a different name?

ALBURGER: How about that? So close!

RANJBARAN: So the second section is energetic, with rhythmic drive. It is not a battle, but it is grand and vast. It is tense, but never reaches a finale.

ALBURGER: Well, you have another section to go.

RANJBARAN: Two numbers are important in Mithraism: "4" and "7." At the end of this middle section, we hear four strokes, and then seven.

ALBURGER: Both numbers are important in Western traditions, too.

RANJBARAN: Absolutely. Including the seventh month, when my brother was born! And the final second represents "Love." And it is soft and full of lyricism. A picture of how we hope the world will be someday!
Posted by Mark Alburger at 10:00 PM