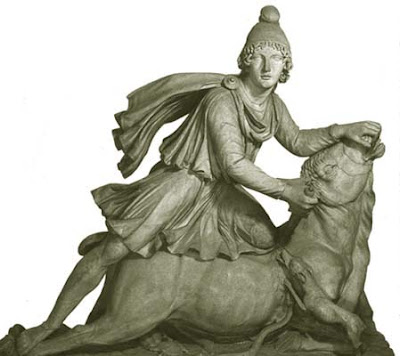 The Veterans Auditorium concessions area was bespangled with various late-60's rock memoribilia, and young people were playing chamber music of W.A. Mozart and Peter Tchaikovsky before the concert, so it was a little hard in this context to see where contemporary art music would fit into the mix. Still the Marin Symphony, under Music Director Alasdair Neale made a game effort on behalf of a relatively new work, on May 1, in their showcasing of Iranian-American composer Behzad Ranjbanan's Mithra (2009).

The c. 15-minute piece, inspired by an early Persian deity, attempts to meld Eastern and Western musical and religious sensibilities into a universal one, and does a pretty good job of it, in three interconnected sections. If the trappings of the opening flute-harp-and-brass music are inspired by Middle-Eastern ensemble practices, the execution is definitely East-Coast Academic American, in a post-romantic language that emphasizes orchestral color and common-practice modernism over any direct allusions to the forthrightness of folk music or the microtonality of the Dastgah modes.

The second section, animated and energetic, alludes to the chaos of battle, and is contrapuntal enough to definitely distance itself from the old American saw of "it's got a good beat, and you can dance to it." The most literal joints in the music are the hammerstrokes of four and seven impulses which usher in the beautiful final section. This is music of rapture and transport, and the orchestra gave the chorale-like East-West apotheosis its due, in solemn, sensual string lines that soared to spiritual heights.

Soaring as well was Zuill Baily's performance of the Antonin Dvorak Cello Concerto. The soloist seemed to personify values of the concession pre-show: here was a young virtuoso playing with all the visceral panache of a rock star -- head bobbing, face-making, and a thoroughly convincing and exciting rendition throughout. The violoncello, perhaps even more than the piano or violin, is well nigh a perfect solo vehicle when the soloist's music is memorized. Rather than the profile of the side view, the performer faces straight out, caressing and gesticulating over the voluptuous lines.

The Symphony No. 1 of Johannes Brahms wrapped up the session, in a workmanlike performance that in part captured the innovation and power of how this music must have been perceived in its premiere. But that was 135 years ago (1876), when presented by a conductor who clearly had confidence in the contemporary, rather than falling back on a program of mostly-older music.
Posted by Mark Alburger at 9:00 PM