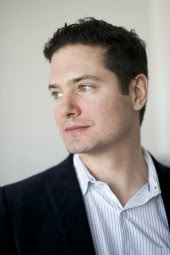 Jefferson Friedman. String Quartets No. 2 and 3. Chiara String Quartet and Matmos. New Amsterdam Records. "Jefferson Friedman is a tough composer to pigeonhole, given his high-energy eclecticism and his penchant for free appropriation of both rock and classical conventions. He has an original, compelling voice as well as ideas that draw you in and make you want to see where he will take them; yet if you listen closely, his basic materials are essentially the same as those that his predecessors have used, only juxtaposed in different, often daring ways. If you think of the two string quartets here, Mr. Friedman’s Second (1999) and Third (2005), as neo-Romantic works, you won’t be wrong, at least most of the time. Both begin with vigorous, hard-driven movements in a tonal if purposefully brash style, and they sound surprisingly conventional until Mr. Friedman veers off toward unusual byways of rhythm or timbre. One odd turn in the Second Quartet is a slow movement that sounds oddly medieval at first, then melts into a lush, Romantic section that gives way in turn to a choralelike chordal section. Near the end of the Third Quartet’s second movement, the players are asked to slide into their notes, creating an odd, spacey effect in dense passages. Yet from within that weird, slippery texture, a set of solid, repeating, consonant chords emerge, bringing the movement to an unusually eerie, slow finale. The Chiara String Quartet has made these works centerpieces of its live repertory in recent seasons, and the vital performances reflect the players’ devotion to Mr. Friedman’s work. In an original touch, New Amsterdam has included two remixes by Matmos, an electronic music group, which took passages from the quartet recordings and reconfigured them imaginatively by weaving in beats, drones and computer timbres, and making them into virtually new works" [Allan Kozinn, The New York Times, 8/25/11]. 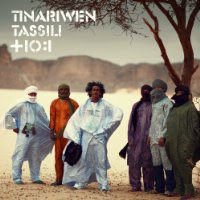 Tinariwen. Tassili. "In the language of the Tuareg nomads who for centuries have roamed the most remote reaches of the southern Sahara, 'tinariwen' means 'deserts.' But ever since the musical group of that name released its first CD in 2001, its members have recorded not on their home turf but in much the same way that American and European bands do: in the artificial environment of a recording studio, in cities like Paris and Bamako, Mali. With Tassili . . . Tinariwen, whose music is a hard-rocking hybrid of Berber, Arab, Western and black African styles, has sought to return to its beginnings. Named for a spectacular area of canyons and sandstone arches near Algeria’s border with Libya, the CD was rehearsed and recorded out of doors there, in tents and around campfires much like those where the group’s founding members, political exiles then living in refugee settlements, first came together to play. 'We wanted to go back to our origins, to the experience of ishumar,' which means exile or being adrift, explained Eyadou ag Leche, the band’s bass player, speaking in French during an interview in New York in July. 'Those were times when we would sit around a campfire, singing songs and passing around a guitar. Tinariwen was born in that movement, in that atmosphere, so what you hear on Tassil is the feeling of ishumar'" [Larry Rohter, The New York Times, 8/31/11].

Posted by Mark Alburger at 7:00 PM