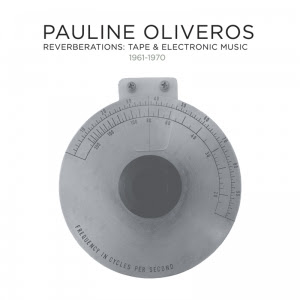 Pauline Oliveros. Reverberations: Tape and Electronic Music, 1961-1970. Important Records, 2012. ''Oliveros is well served by . . . [this] retrospective of her unreleased earlier work, coinciding with her 80th birthday celebrations being held throughout 2012. Unlike many of her contemporaries, Oliveros approached electronic music composing as an improviser. Her tape pieces for Buchla synthesizer, and sometimes tape delay, sound in-the-moment, being realized in real-time by someone whose acute sensitivity to the qualities in sound allowed her to paint intricate pictures with sine tones and filters on the fly. Denser, her work at the University of Toronto's electronic music studio came from her immersion with its 12-tone generator system, which was cutting edge for its time" [Glenn Hall, exclaim.ca, 5/23/12]. "[A] new 12-CD box . . . provides an overview of the rigorous works she created during the [San Francisco Tape Music C]enter’s heyday. Many still sound startlingly current" [Steve Smith, The New York Times, 8/10/12].

Posted by Mark Alburger at 6:00 PM