A Quarter-Century of Bang on a Can / Phillip George 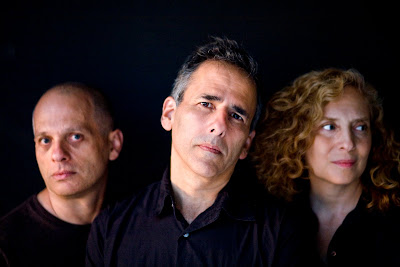 Its is perhaps best known for its Marathon Concerts during which an eclectic mix of pieces are performed in succession over the course of many hours while audience members are welcome to come and go as they please. For the twentieth anniversary of their Marathon Concerts, Bang on a Can presented twenty-six hours of uninterrupted music at the World Financial Center Winter Garden Atrium in New York City.

Among the many Bang on a Can events were performances by John Cage, premieres of Glenn Branca’s epic symphonies for massed electric guitars, and fully staged operas of Harry Partch, featuring the composer's original instruments.

The three artistic directors occasionally collaborate by jointly composing a large work, often without revealing which sections each contributed. Examples include:

The Carbon Copy Building - a "comic book opera" with words and drawings by MacArthur Grant recipient Ben Katchor. It was the winner of the 2000 Obie Award for Best New American Work.

Lost Objects - a contemporary oratorio, with a libretto by Deborah Artman. It is a fusion of baroque music and modern soundscapes, rendered in performance by the original instruments ensemble Concerto Köln with four electronic instruments, three solo vocalists, a choir, and a live remix generated by DJ Spooky.

Shelter - a multimedia work that in the words of librettist Deborah Artman, "evokes the power and threat of nature, the soaring frontier promise contained in the framing of a new house, the pure aesthetic beauty of blueprints, the sweet architecture of sound and the uneasy vulnerability that underlies even the safety of our sleep."

Bang on a Can is associated with the SPIT Orchestra and Bang on a Can All-Stars -- the latter consisting of clarinetist/saxophonist Evan Ziporyn, electric guitarist Mark Stewart, keyboardist Vicky Chow, percussionist David Cossin, cellist Ashley Bathgate, double bassist Robert Black.

Bang on a Can has released recordings on Composers Recordings Inc, Sony Classical, Point Music, Nonesuch, and its own Cantaloupe Music label. In addition to releasing works by Lang, Gordon, and Wolfe, and Lang -- the label has released music of Alarm Will Sound, Don Byron, R. Luke DuBois, Ethel, Gutbucket, Icebreaker, Phil Kline, and Evan Ziporyn.
Posted by Mark Alburger at 10:00 PM