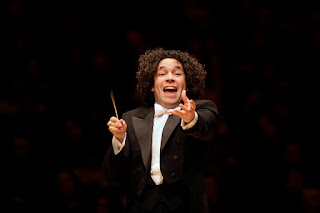 You don't have to have a degree in international studies to realize that change isn't happening in the first but in the third part of "our world."  Just look at Egypt, or much closer to the United States, Latin America, where Venezuela's President Hugo Chavez has become a major and much feared player on the world stage.  And while the navel-gazing West keeps saying that everyone but them and their cronies are "on the wrong side of history" real living vital history has passed them by, or as the great Egyptian singer Um Kulsumm used to say when explaining why she would arrive at the train station way before it was scheduled to leave -- "wait for that which won't wait for you."

Going to a concert these days is a bit like going to a lecture.  Read the program notes, talk politely with friends, and when the downbeat comes sit on your hands.  But then history isn't going to wait -- how could it when it's head and shoulders next to you  -- for your approval, and conductor Gustavo Dudamel and his Simon Bolivar Symphony Orchestra of Venezuela,  on the first stop of their '12-13 US tour at UC Berkeley's Zellerbach Hall on November 29, weren't waiting for anything, much less a train.  The first of their two touring programs showcased three pieces by three superb composers who turned European art music on its head. Carlos Chavez (1899-1978) was, by anyone's reckoning, a major figure, both as a composer, and like his U.S. compadre Copland, an inveterate organizer and promoter.  His 1935 Symphony No. 2  ("Sinfonia India") -- one of six symphonies -- was thoroughly classical -- in this case meaning restrained -- and impeccably made, which Dudamel and his band projected with great clarity and verve.  Chavez was sophisticated, though his Sinfonia India is now more of the past -- self-consciously fashioning an identity for his people as Copland did for his -- but a perfect curtain raiser for the rest of the concert.

Being gifted in more ways than one seems to have worked for and against Spanish-born composer and later Cuban, Mexican, and U.S. resident Julian Orrbon (1925-1991), who was a writer, teacher, scholar, and master of sound.  His Tres Variaciones Sinfonicas (1953) -- Slonimsky dubbed Orbon a neoclassicist -- but  this didn't prepare the listener for how it felt  live.  The fact that Orbon took his basic material for Variaciones 1 and 2 from a pavana by 16th century composer-lutenist Luis de Milan, and an organum-conductus from the 11th century master of the Notre Dame school of Paris, Perotin -- would lead one to think that the results would be derivative, but they're anything but, and they don't adhere strictly to their forms.  His pavana is a grand court dance of stunningly weighted colors -- every orchestral choir gets to shine -- with a typically mid-20th-century focus on rhythmic cross-cutting, which doesn't sound tied to its Iberian original.  Orbon's organum-conductus is a reflection/refraction from its capella source, with lines and gestures appearing and disappearing at will.  But the on youtube performance led by the gifted young Venezuelan conductor Cesar Ivan Lara and the Simon Bolivar Orchestra in Caracas, Venezuela, the work is more fluent, and mysterious.  It's also idiomatic, and the slightly archaic medieval-sounding lines and cadences are solid, evanescent, yet in no way Gallic.  Dudamel was on much firmer ground with Variacion 3 -- Xylophone -- which Orbon derived from an Afro-Cuban dance tune, and Dudamel's band mined its strong colors and rhythms to a T, with the trombones near the end punching out their vamp as if there were no tomorrow.  I don't know how Dudamel found this piece, but thank God he's taking it around, and perhaps other conductors will take it up, for it's a knockout.  The Zellerbach audience erupted in cheers after the last note sounded.

What can one say about a force of nature like Silvestre Revueltas (1899-1940)?  A genius certainly... a master colorist for sure.  And one with a passion, imagination and rhythmic acuity composers have seldom commanded.  I've known and loved Revueltas' work via recordings and performances for years, but hearing his composer friend Jose Ives Limantour's four-movement suite drawn from his cues for Chano Urueta's 1939 film La Noche De Los Mayas live was a caballo de un color diferente.  Revueltas seems to have been a largely instinctive composer -- one imagines him writing rapidly like other under-the-gun film composers and in white heat like Arnold Schoenberg.  But how fast you deliver the goods has precious  little to do with what you produce.  You might have five years and produce a bad opera, as my late composer-friend Earle Brown once put it to me, or you could have scant minutes and come up with gold.  Revuetlas's imagination operated in full force here.  The massive tuttti which bookends the beginning and end of the first movement -- with lyric material in between -- must be the main title, the subsequent Noche de Jaranas: Scherzo -- is a clear-as-air indigenous Mexican dance -- and the following Noche de Yucatan a tender meditation for strings.  The movement sounds vaguely Mahelerian at one point, which of course prompted one western writer to call the section Mahlerian -- can we ever get rid of the west?  But the movement most people will take home is its final raw savage Noche de Encantamiento -- Night of Enchantment -- Theme, Variations 1-4, and Finale, which has the biggest range and drama, compared to the succeeding three.  Revueltas was a very succinct composer -- one has to be when writing for the theatre, and it would be wonderful to see his music with the original film.  But any music lives or dies on its own merits, and Revuletas's here certainly thrives.  Delicate, tender in the second movement, urgent driven in the fourth, with its sudden out-of-nowhere silences, and just as sudden eruptions of fierce fiddling in opposing choirs, and polymetric enchantments in all.  Massed wind tritones, plus 12 percussionists  -- with one "doubling " as a wailing singer "on conch" -- which was probably what happened in the film.

The audience erupted in cheers as the last fff note sounded, and Dudamel's superb 179-at-least-member band, with a large ace percussion contingent, and cellos sitting center stage as in an 18th-century layout -- exhibited perfect ensemble and perfect unanimity of purpose.  The third part of "our world" is clearly leading the way.

Posted by Mark Alburger at 9:00 PM