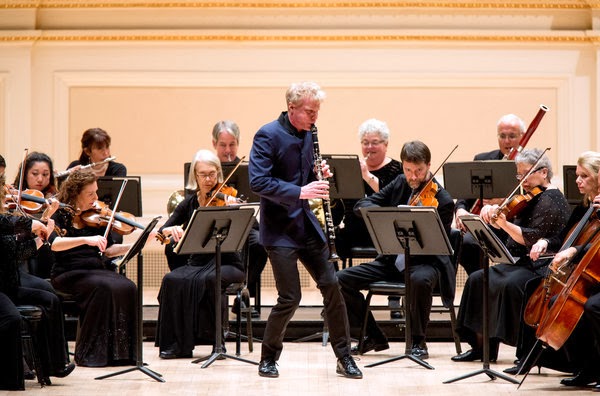 The Orpheus Chamber Orchestra performs Irving Fine's Serious Song and an improvisation on music from Igor Stravinsky's The Rite of Spring.  Carnegie Hall, New York, NY. "[T]he spectacular Carnegie encore [of clarinetist Martin Frost] . . . began as a modest improvisation on licks from Stravinsky’s The Rite of Spring and opened into two riotous outbursts of klezmerlike note-spinning, ranging mercurially from the most delicate and attenuated to the most raucous, with the orchestra jamming alongside. . . . At the opposite emotional extreme, Fine’s Serious Song was offered in tribute to the centenary of the composer, who was born in Boston on Dec. 3, 1914, and died there in 1962, respected by colleagues like Aaron Copland and Leonard Bernstein. Subtitled A Lament for String Orchestra, the nine-minute piece works its way through an anguished supersaturated late romanticism reminiscent of Schoenberg’s Transfigured Night to find a tentative peace in a sort of shimmering Stravinskian neoclassicism" [James R. Oestreich, The New York Times, 12/9/12].

UnCaged Toy Piano Festival.  Pianos, New York, NY.  Through December 14.  The spirits of John Cage and Charles M. Schulz’s Schroeder converged . . . at . . . a cozy, noisy nightclub on Ludlow Street.   Founded in 2007 by Phyllis Chen -- a skillful pianist and composer, a budding impresario and a leading proponent of the toy piano as a vehicle for serious music -- the festival opened with a performance by Margaret Leng Tan.  Ms. Tan, who was celebrating her 68th birthday on Thursday, has long been the toy piano’s most serious and diligent advocate. It made sense that she would occupy a prominent slot in Ms. Chen’s festival. But it also seemed oddly appropriate, given the number of toy-piano fanciers in the room, that Ms. Tan abandoned her familiar keyboard for a new one: the Speak-and-Play, a voice synthesizer developed by the sound artist and inventor Ranjit Bhatnagar.  Using the instrument, an electronic keyboard that produces samples of Mr. Bhatnagar’s voice intoning 40 fundamental sounds used in English, Ms. Tan played five selections from Cage’s Indeterminacy, with Mr. Bhatnagar on percussion, radios and toys. The performance was by no means smooth -- imagine the name 'Cage' rendered as 'kh ... AY ... dhz ... uh' and you get the general idea -- but it was serious and screwy, befuddling and captivating, all at once.  In that sense, the performance was a quick glimpse of much that would follow in the show. . . .  Most of the performances could be fairly described as quirky, without selling their integrity short.  The festival’s call for scores specified music for “toy piano plus unconventional instrument.” Lukas Ligeti paired the keyboard with a digital sampler in his bucolic, kinetic Play Addict, performed by Ms. Chen.

Posted by Mark Alburger at 7:00 AM