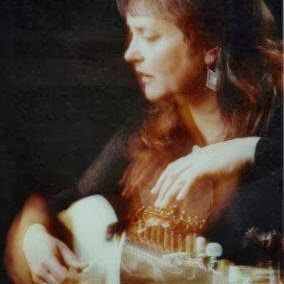 Life is basically ambiguous.  We don't know what we're doing even when we're doing it, but art, which is our organized experience has to be clear.  It has to have a beginning, middle, and end, even in these post-modern times.  These things came to mind when I caught an evening of improvised music by Bay Area musicians Lisa Sangita Moskow and Guillermo Galindo, on January 11, at the intimate and welcoming Far Leaves teahouse which has been at its present Berkeley location for almost three years.

Sangita and Galindo's work has been largely in the "world music" and "new music" scenes, respectively and you'd this would make for a forced or even incompatible pairing, but their musical interaction here sounded both natural and logical. And it reminded me of what my late friend Earle Brown told me that Coltrane. He always played the absolutely necessary note in his improvisations, and so improvisation, as its commonly understood, is not just going postal, but playing the only the essential within a firm musical structure.

What could have been a gimmicky concert ended up being one with real music, and Sangita and Galindo's improvs never outstayed their welcome which is always the sign of scrupulous artists who know they're playing for themselves -- from their own inner needs, if you will -- but there are always others in the room. The audience in the jam-packed little tea house was deeply attentive throughout which means of course that these two remarkable artists struck communicative gold. A lovely and deeply satisfying concert, with beautifully shaped music with a beginning, middle, and end.
Posted by Mark Alburger at 9:00 PM