The Birth of the Modern / Mark Alburger 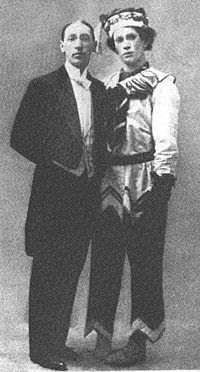 Will we ever know what really happened in those crucial years before World War I? In 1905, Nicolai Rimsky-Korsakov musically enriched a nice Russian revolutionary tune in a charmingly totally non-revolutionary way. In 1911, Igor Stravinsky exploded musical consciousness by writing a ballet about a forelorn Pinocchoesque puppet come to life. In six years, Russian musical aesthetics were turned on end, and the musical world has never been the same.

Such thoughts came to mind when hearing these two pieces, along with Peter Tchaikovsky's grand Symphony No. 4, at Davies Hall with the San Francisco Symphony and Michael Tilson Thomas on January 25.

While Dubinuska is a serviceable little work in a textbook vibrant orchestration, Rimsky's pupil Stravinsky outdoes his master in virtually all regards in Petrushka. Where does this music come from, as a bolt out of the blue?

Well, some evidentally came from other sources, including five Russian folk songsm two waltz's by Joseph Lanner (a friend of Johan Strauss, Jr.), and one by Emile Spencer, "Elle avait un jame en bois," that turned out to be still in copyright (Spencer received royalties for years after). But, as is said in certain circles, it's not what you've got but how you use it., and Stravinsky's usages are totally original. Harsh bitonality, crazy scales and arpeggios, sparkling orchestration and animated rhythms at every turn -- this is a music that takes nothing for granted, and the San Francisco Symphony made the most of every moment.

If the Tchaikovsky symphony seemed tame by comparison, it was, although, in its day, the use of a recurring motive and various orchestrational nuances would have seemed fresh enough. Certainly the soloists in the Straivnsky and Tchaikovsky made every measure count, and a characteristic Russian wit and extravagance -- inherent in both scores -- was nicely brought out.

Particular commendations go out to pianist Robert Sutherland in the Stravinsky, and the string, woodwind, and brass sections in the third movement of the Tchaikovsky for crisp and intelligent musicality. On either side of a great stylistic divide there was musical excellence.
Posted by Mark Alburger at 9:00 PM