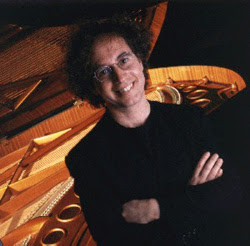 Tod Machover (b. November 24, 1953, Mount Vernon, New York), son of pianistWilma Machover and computer scientist Carl Machover, attended the University of California at Santa Cruz in 1971 and received a BM and MM from the Juilliard School in New York where he studied with Elliott Carter and Roger Sessions (1973–1978). Machover also started his Doctoral studies at Juilliard before being invited as Composer-in-Residence to Pierre Boulez's new Institut de Recherche et Coordination Acoustique/Musique (IRCAM) in Paris.

In the fall of 1978, Tod Machover arrived at IRCAM and was introduced to Giuseppe di Giugno's digital synthesizer 4 series. Light was premiered at the Metz Festival in November 1979 using 4C, the brain-child of di Giugno's concept that "synthesizers should be made for musicians, not for the people that make them."

Machover was named Director of Musical Research at IRCAM in 1980.

In 1981 he composed Fusione Fugace for solo performance on a real-time digital synthesizer, called the 4X machine.

Joining the faculty at the new Media Laboratory of the Massachusetts Institute of Technology (MIT) in 1985, he became Professor of Music and Media and Director of the Experimental Media Facility.

Machover is widely recognized for inventing new technology for music, including Hyperinstruments which he launched in 1986. Such instruments use use smart computers to augment musical expression and creativity. He has designed hyperinstruments for some of the world's greatest musicians, including Yo-Yo Ma, as well as for the general public and for children.

Back at IRCAM that year and the next, Machover was motivated to score for keyboard and percussion duet with emphasis on complex sound layers. He composed Valis (1987) again using di Giugno’s 4X system, to process voices. This science fiction opera – called 'the first opera of the 21st century" by The New York Times – was commissioned for the tenth anniversary of the Centre Georges Pompidou.

This was followed by Media/Medium (1994), a "magic" opera for the magicians Penn & Teller.

Currently Professor of Music and Media at the MIT Media Lab, he is head of the Lab's Hyperinstruments/Opera of the Future group and has been Co-Director of the Things That Think (TTT) and Toys of Tomorrow (TOT) consortia since 1995.

The years 1996-98 brought fourth the audience-interactive Brain Opera (1996/8), commissioned for the first Lincoln Center Festival, toured worldwide, and permanently installed at the Haus der Musik in Vienna since 2000. Some of this occurred concurrently with Resurrection (1999), based on Tolstoy's last novel and commissioned by Houston Grand Opera

Machover gave a keynote lecture at NIME-02, the second international conference on New Interfaces for Musical Expression, which was held in 2002 at the former Media Lab Europe in Dublin, Ireland, and is a frequent lecturer worldwide.

The Toy Symphony -- called "a vast, celebratory ode to the joy of music and its power to bring young and old together, diversity into unity (Boston Globe)" -- dates from this same year, and has been touring worldwide ever since.

Song of Penance (1992) for hyperviola and chamber orchestra Hyperstring Trilogy

He's Our Dad (1997) for soprano, keyboard and computer-generated sound

Resurrection (1999) (based on Leo Tolstoy's novel)

I Dreamt A Dream (2004) for youth chorus, piano and electronics

Jeux Deux (2005) for hyperpiano and orchestra
Posted by Mark Alburger at 10:00 PM