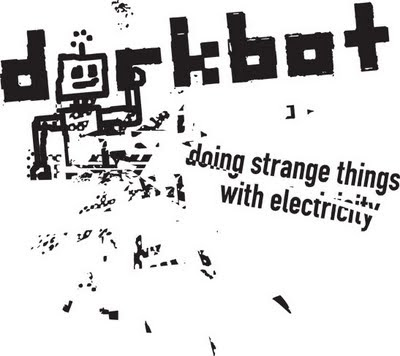 Founded five years ago by Douglas Repetto, the dierector of research at Columbia University's computer music center, dorkbot is an informal club of artists, techies and geeks who do "strange things with electricity," according to their motto. In five years, chapters of the club have sprung up in nearly 30 cities around the world, form Seattle to Rotterdam to Mumbai. . . .

{A]t the [recent] dorkbot meeting were Alyce Santoro, an artist who weaves funky textiles out of a "sonic fabric" of audiotape and cotton, and Luke DuBois, a composer and "computational artist," who discussed a process he developed called "time-lapse phonography."

Mr. Dubois used his application, essentailly time-lapse photography for sound, to create a new pice of music out of the 857 songs that have appeared at the top of the Billboard charts since 1958. The result, called Billboard, is a 37-minute-long drone: each hit song is reduced to its average timbre and keyby an algorithm that speeds up the original work without giving it a chipmunk chirpiness.

"It's a great way to get a gestalt of a piece of music," Mr. DuBois explained.


The stolen works include the enormous -- a hulking two-ton sculpture by Henry Moore -- and the comparatively modest -- a three-foot-long dung beetle by . . . Wendy Taylor. . . .

More than 20 large sculptures, all of them in bronze, have been taken from museums, sculpture gardens and private collections in and around London in the past year, most in the last six months. The method appears almost laughably simple: the thieves arrive with a van or a truck in the middle of the night, heave the works into the back and drive off, never to be heard from again (at least not so far)(.

The police are stymied.

. . . Sergeant [Vernon] Rapley said . . . "We're concerned that none of the pieces have been recovered and that we haven't received any information about them. That leads us to think that there's some truth to the rumor that they might be being melted down."

. . . Wihile Moore's Reclining Figure, which was stolen from the grounds of the Henry Moore Foundation in Hertfordshire on December 15, is worth as much as 10 Million [pounds], or nearly $18 million, as a work of art, Sargeant Rapley said, its value as scrap metal is more like 5,000 [pounds], or roughly $9,000.


Meredith Monk's music is etherieal, visceral and direct. It relies on building blocks of sound, bits of chanted tune interwoven with cries and clucks and other manifestations of what is known as extended vocal technique. It is about using the voice as expression without mediating elements, like words. And people often descibe it as simple.

But anyone who thinks it is easy has never tried to sing it.