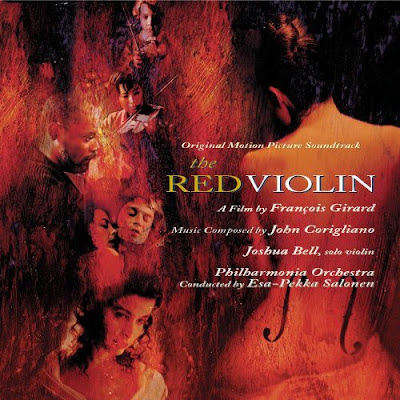 In concert halls, there is an old unspoken 20th-century tradition of the "modern music sandwich" -- i.e. play some nice, safe standards as the daily bread at the beginning and end of a program, then slip in some suspicious, meaty new work in the middle -- the programmer's thought somehow being that traditional audiences will be captive, trapped in the musical deli of familiar wrappings.

The Marin Symphony took this convention out on November 4 by making the contemporary music "to go," presented on an entirely different date (November 1) and honing to the merely tried-and-true on the concert evening.

The interesting night was the former, a screening of Francois Girard's The Red Violin, the film inspired by Elizabeth Pitcairn's storied 1720 Red Mendelssohn Stradivarius. As noted in the program, "Shortly after it was made, the instrument mysteriously vanished. Its disappearance for more than 200 years spurred historians, writers and journalists to speculate on the violin's enigmatic history."

How even more interesting would it have been to have had the Marin Symphony perform John Corigliano's score for the film live, in the tradition of other movie-music evenings, including this organization's own take on the Dmitri Shostakovich / Sergei Eisenstein Battleship Potemkin in October 2007.

Instead, we had a post-Halloween Night of the Dead performance of Ludwig van Beethoven, Felix Mendelssohn, and Johannes Brahms -- a concert which could have taken place a hundred years ago, and would have been even old-fashioned then. Imagine a performance in 1805 (the year of Beethoven's energetic Leonore Overture No. 3) which included no music less than 130 years old (say, Thomas Morley madrigals, Claudio Monteverdi opera excerpts, and Heinrich Schutz's Saul, Saul). You can't. While Palestrina was still performed in churches, even Henry Purcell and G.F. Handel would have been too contemporary, and J.S. Bach hadn't been whole-heartedly rediscovered.

No. Music for Beethoven, Mendelssohn, and Brahms meant new works. What you hear in popular music all the time. What classical music has abandoned -- to seemingly no objection by some audiences whatsoever -- the standing ovation for Pitcairn's wonderful performance of the Mendelssohn Violin Concerto was admittedly well deserved in this instance. But some of us had to remain seated on the weakness of the overall programming conception.

A recent road trip included Arnold Schoenberg's Book of the Hanging Gardens, and, yes, some 20th and 21st-century music remains daunting. But other selections by Ralph Vaughan Williams, Igor Stravinsky, Philip Glass, et al were sheer delights. Joys rarely heard in some circles, to a great pity. If only old music was heard in Beethoven's day, we'd have no Beethoven. If programming such as heard at the Marin Symphony continues, what will we be missing?
Posted by Mark Alburger at 7:00 PM