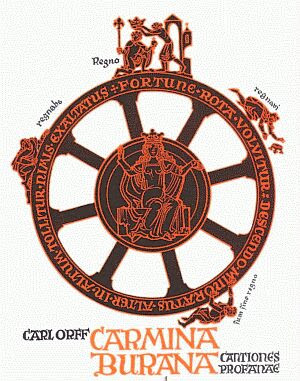 Such thoughts came to mind when taking in a glorious and visceral performance of Carl Orff's great Carmina Burana (1936) at Marin Symphony and Chorus, conducted by Alasdair Neale, this past April 27. Yes, the rendition was magical, abetted and aided by the first usage that this writer has experienced of supertitles outside the confines of opera.

The ribald texts of these Songs of Beuren, attributed to medieval wandering goliard-scholars, are all the more immediate when projected above a chorus and orchestra, such that an audience cannot miss their import. Sure, one can follow words in a program booklet, but how many do? The answer in this related case was clear, as glee alternated with wonder in communal laughs and gasps.

My goodness, this stern piece. sung by a youth chorus, is about young people getting it on! That clangorous one, sung resolutely and theatrically by baritone Igor Vieira, is an heretical drinking song! And so on.

Commonality and reinterpretation were everywhere. Here were emotions just as present then as now (of course, in the reproductive cycle, the only reason we're here is that they're there), re-worked in Orff's telling and re-experienced by us.

The opening "O Fortuna," with its suspended-ninth dissonances, and tense minor interplay of three-patterns in the choral melody against two-patterns in the animated accompaniment, sounded in top form. For many, this familiar music has become inextricably associated with various movies and movie-trailers, eliminating certain odious comparisons with Igor Stravinsky's formerly better-known Symphony of Psalms (written six years previously) and goose-stepping Hitler youth (Orff didn't exactly flee Nazi German at his earliest oppornity).

Corey Head's tenor solo in "The Song of the Roasted Swan," was almost too beautiful (how often do critics complain along such a line?) as the bizarre and surreal text and orchestrations evoke a Rite-of-Springian fantasy world that shocked yet again.

Also featured was a sparkling rendition of Colin McPhee's Tabuh-Tabuhan, a work composed in the same year as Carmina Burana, by one of the pioneers of musicology. If the work lacks, by design, the forward thrust of Western art music in its evocation of Balinese models, it offers a refreshing proto-minimalist take on life, the universe, and everything that one can now hear was far ahead of its time.
Posted by Mark Alburger at 10:00 PM