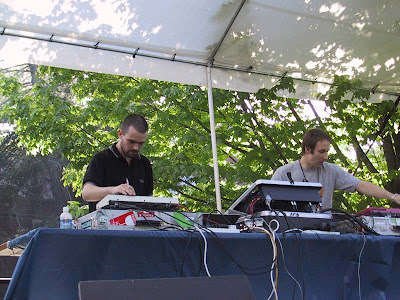 Autechre. Quaristice. Warp. "[Quaristice] is far too cerebral for a typical club D.J. set; the music often splinters the beat or omits it entirely" [Jon Pareles, The New York Times, 4/17/08].

Frederic Rzewski. Rzewski Plays Rzewski: Piano Works, 1975-1999. Nonesuch. Seven-CD box set. "[He is a] formidable pianist with a touch and attack sometimes eerily reminiscent of Glenn Gould . . . . Somewhere . . . between fantasias on protest songs and chapters of his mammoth pianistic 'novel' in progress, The Road, there is a cameo turn for a seriously vocal rubber ducky. Yet what emerges above all is a picture of a pianist enamored of his instrument as handed down by the master builders of the 19th century. 'Rzewski is in the line of the great pianist-composers like Brahms, Beethoven, Mozart and Haydn,' said Daniel R. Gustin, the director of the Gilmore festival and the prime mover behind the current tribute [Kalamazoo, MI, April 28]. 'He’s a bit of a maverick, which is fun, and it’s hard to pin him down as to style and approach. But his piano works connect to the great pianistic tradition.' Mr. Rzewski’s concentration on writing for piano is easily explained. 'I tend to work with what is there,' he said. 'Opera houses don’t come asking me to write operas. Symphony orchestras don’t come asking for symphonies. But there’s this piano player I see every day who keeps asking me for music. So that’s what I do.' A friend once suggested that he drop off some scores with the mesmerizing pianist Martha Argerich, another Brussels resident. 'I thought, no, why bother the woman?' Mr. Rzewski said. 'I have great respect for those who specialize in Schumann or whatever. The classical tradition needs to be kept up.' But if the Argerichs of the world pass Mr. Rzewski by, other adventurers of the keyboard seek him out '' Ursula Oppens, for instance. The story goes that she requested a pendant to Beethoven’s monumental 'Diabelli' Variations and that Mr. Rzewski obliged with an instant classic: the magisterial 36 Variations on 'The People United Will Never Be Defeated!,' based on a Latin American revolutionary chant. Not quite so, Ms. Oppens said recently. 'I asked him to write a piece. Anything. He said: ‘I want to learn more about you. What are you interested in?’ I said, ‘The next thing I’m going to learn is the ‘Diabelli’ Variations. Then this piece turned up, and I never did learn the ‘Diabelli.’ 'It’s very challenging, but technically most of the time the writing is quite traditional. If you’ve had your normal background of practicing Chopin études, it’s right in that vein. I also think of Liszt because it’s so virtuosic. But above all one thinks of Beethoven because of the personality, the way Rzewski wants to defy the limits.' And then there is the vision. Much as the Beethoven of the Ninth Symphony harps on universal brotherhood, Mr. Rzewski hammers home the message of solidarity through dozens of musical permutations. . . . No question, Mr. Rzewski likes to keep listeners guessing. When he plays other people’s music, he can raise hackles by improvising cadenzas in the middle of such untouchable masterworks as Beethoven’s Hammerklavier and Appassionata Sonatas. 'I do it because I think it’s authentic,' he said. 'It’s what I think Beethoven would have done. A few years ago, after a concert at Bard College, a musicologist came up to me and told me very sternly that you could do that at parties but not at a concert. Usually people don’t hire you at all if they think you’re going to go in for such shenanigans. 'And maybe they’re right. My Japanese friend Yuji Takahashi, the pianist and composer, says: ‘It’s redundant. All the irrational stuff is already there, in Beethoven’s writing.’ I do whatever I think is right at the moment. One thing is for sure: You shouldn’t prepare it. Improvisations have to pop into your head then and there, or there’s no reason for them.' Critiquing his own performances Mr. Rzewski can be severe. The Sonata (1991) as played for the Nonesuch collection, he said, is not good. 'It’s very hard, and I hadn’t played it in a long time. So I fooled myself into thinking that it if it was slower, it would be more profound. But it just drags.' When others play his music, Mr. Rzewski is most appreciative. 'Usually I find with some satisfaction that they play my stuff because they have something to say,' he said. 'I’ve never heard a bad De Profundis,’ he added, citing his elaboration on Oscar Wilde’s bleak yet comforting testament from prison. 'It has this ridiculous theater stuff in it. A pianist has to go out on a limb. A conventional pianist won’t go near it.' Yet many of his pieces are as intricately constructed as a Swiss watch. Descriptions of the architecture make the head spin, yet the music is easy to listen to. Are all those wheels within wheels meant to register? 'I’m not sure it matters that much,' Mr. Rzewski said. 'You never know whether structural details have any counterpart in meaningful existence. They’re fantasies. Perhaps something happens when the structure is partly submerged. After all, that’s more like real life. You don’t see crystals and perfect forms. You see imperfect forms, unfinished forms. If you want music to be like life, it has to be imperfect. I think music should be as much like life as possible.' Full of grand designs, in other words, and full of surprises" [Matthew Gurewitsche, The New York TImes, 4/27/08]. 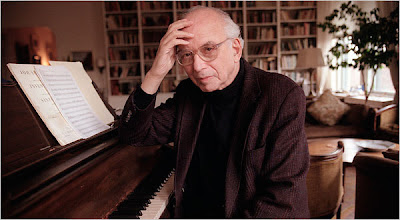 George Perle. Bridge. "George Perle, who turns 93 next month, is a rare survivor of a disappearing movement. The general public will barely notice its departure, given that not many people know it ever existed. Mr. Perle belongs to a second generation of explorers. I doubt there will be a third. It is not a question of quality. His atonal compositions, 12 of which are collected in a two-CD retrospective on the Bridge label, are like well-cut jewelry: small enough to hold in the hand, diamond hard yet smooth to the touch, and shining with reflecting light. I admire Mr. Perle’s music, although I can’t say I like it very much. He speaks a language he and his contemporaries made up. I can speak only the languages I was born to. Sometimes I feel guilty. Maybe I should work harder at his grammar and vocabulary. With age I feel guilty less and less. . . . It sounds reasonable to say that Anton Webern’s Piano Variations take up where Brahms left off. I admire the Webern; I even like it for its strangely satisfying space-age spirituality. I don’t think it has anything remotely to do with Brahms. The Webern, and music that constitutes Mr. Perle’s immediate heritage, is altogether new. It is as if music history in the mid-1920s had stopped dead in its tracks and started again from scratch. Composers of the Second Viennese School -- Arnold Schoenberg, Webern and, to a degree, Alban Berg -- were like mutineers against the divine right of tonal music. Serialism was their Pitcairn Island. Freedom to reinvent was one result, inbreeding another. Until the 20th century musicians obeyed natural laws of physics. Pick up a rock, drop it, and it falls to the ground. Music was the same. Send a piece of music up in the air, doctor and twist it, make it major, minor or modal; in the end it wants to come down to where it started. You can call the process tonality or music’s law of gravity. The Nine Bagatelles for piano (played in the CD set by Horacio Gutiérrez), from 1999, and the Serenade No. 3 for piano and chamber orchestra (with Richard Goode and Gerard Schwarz conducting the Music Today Ensemble), from 1983, both have Mr. Perle’s trademark love for brief, elegant, highly energized phrases separated by marked pauses. Cleanliness and light are present: Art Deco streamlining replaces Edwardian overdecoration. If Mr. Perle is a jeweler, he is also an architect, and you can think of these pieces as buildings. We admire them for clear thinking and precision. Still, not many people want to live in them. It is interesting that Mr. Perle’s take on 12-tone music flourished just as space travel was coming along. He and eminent colleagues like Milton Babbitt and Elliott Carter were our musical astronauts. They defied gravity and left Mother Earth behind. Music soared into space. Out there in the ether a minor second would sound just as peaceful as a major third. Laws were necessary, for with everything now possible, nothing was possible. Schoenberg escaped the chaos of limitless choice with a system whereby the appearance and frequency of certain pitches followed a rational design, one that included turning rows of notes upside down, running them back to front and the like. Mr. Perle’s music thinks in a similar way but invents its own homing devices or tonal centers. It all sounds suspiciously like the 14th century, one of the blackest moments in human civilization and a period that produced reams of musical counterpoint surreal in its density. It may not be overly fanciful to compare the Black Death to AIDS, or the three-dimensional musical crossword puzzles of monkish scholars to the Babbitt Piano Concerto that so bewildered audiences and critics at Carnegie Hall a few years ago. Postwar prosperity helps explain how a musical style attracted so much attention and yet was listened to by practically nobody. As academia and cultural foundations flourished, composers could write music to please themselves and one another and still make a living. Unappreciated genius and the consolations of posterity were conveniently popular conceits. American fascination with science and engineering and disgust for a tired European tradition made serial music and other rule-bound procedures a great new adventure. As with space travel, its practitioners were select and its methodology graspable by a chosen few. Listening to recent Perle pieces like Brief Encounters for string quartet (the DePaul String Quartet) and the Triptych for Solo Violin and Piano(Curtis Macomber and Christopher Oldfather) I find admirable sophistication applied to a language I do not choose to speak. Mr. Perle has an honored place in music, but a narrow one. His pieces also raise what has become a confusing question: What do classical composers writing music like this expect from listeners? The old simple answer was fame — the wider the better — and finally the blessings of posterity. I can’t pretend to get inside Mr. Perle’s head, and I’m sure all of us secretly yearn for greatness, but I cannot believe that he has ever seriously hoped for wide embrace. I recently came across a television program about Mr. Carter, who, at the end, hoped that an increasingly complicated world would breed a public smart and alert enough to appreciate his music. That is a dangerous presumption, one that offers soap to an unwashed public as yet unworthy of his greatness. Afterward I went back to George Perle on Bridge. The air seemed just as rarefied as before but somehow healthier to breathe" [Bernard Holland, The New York Times, 4/20/08].
Posted by Mark Alburger at 5:00 PM