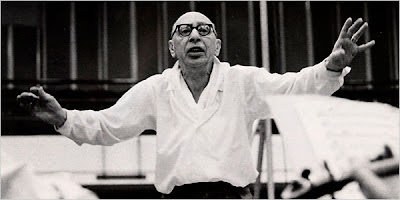 The below is a partial repost re-organization of Richard Taruskin's In Stravinsky’s Songs, the True Man, No Ghostwriters (The New York Times, 4/13/08).

[Fyodor Stravinsky, b. 1843 (the same birth year as Edvard Grieg, and one year before that of Nicolai Rimsky-Korsakov)]

Besides, his father, Fyodor Stravinsky -- a stern, unbending figure toward whom the future composer harbored feelings far more complicated than the Freudian minimum -- was a famous singer. Any wonder then that Stravinsky became the greatest of all composers of ballet: the one music-theatrical genre that excludes singers? Or that when he finally did write a great opera, it would be about King Oedipus?

But skimpy though it is, the list of Stravinsky’s songs is unusually comprehensive. It covers all phases of his career and includes both his earliest extant work and his last finished composition.

The early item, Storm Cloud, was composed in 1902 on assignment for Fyodor Akimenko — a pupil of Stravinsky’s eventual teacher, Nikolai Rimsky-Korsakov — to whom Stravinsky had been farmed out for preliminary (actually, remedial) instruction. It is a thoroughly conventional setting of a short poem by Pushkin, the sort of piece every 14- or 15-year-old composer-in-training turns out. But Stravinsky wrote it at 19. A wunderkind he was not. . . .

That intimate portrait has many earlier counterparts among Stravinsky’s songs. The second in order of composition, How the Mushrooms Prepared for War, is a setting of a nursery rhyme every Russian child of Stravinsky’s generation knew by heart, cast with hilarious incongruity as a huge concert aria for bass voice. It turns out to be a salad of allusions to Fyodor Stravinsky’s favorite opera roles, composed in memoriam in 1904 and dedicated to the composer’s best friend at the time, Andrey Rimsky-Korsakov, a son of Stravinsky’s surrogate father.

Its sentimental significance seems obvious because Stravinsky kept the manuscript with him throughout his life but never published it; he never quite finished it. It was reassembled from two incomplete drafts by his son Soulima, who had it published by Boosey & Hawkes in memoriam in 1979, thus repeating the gesture of homage an ambivalent Stravinsky son paid to an illustrious, loved but also resented Stravinsky father.

There are settings of Russian Symbolist poetry of a kind that every Russian composer was setting in the period before World War I. There are imitations of Debussy in the form of a pair of Verlaine settings made in 1910, after Stravinsky met the great French composer, and settings of Japanese poetry in Russian translation that show the dual influence of Stravinsky’s new French friends with their passion for japonaiserie and of Schoenberg, whose Pierrot Lunaire provided the immediate model. . . .

There are also songs dedicated to each of Stravinsky’s children. Most poignant is a lullaby composed in 1917 for his daughter Ludmila (or Mikushka, as the endearing text calls her), who died of tuberculosis at 29 in 1938. It was published (as Berceuse, with a French text replacing the original Russian) only in 1962, in the appendix to one of Stravinsky’s books of memoirs as dictated to Robert Craft. . . .

These are all minor works. But there is one spate of songs that, taken collectively, signify a major watershed in Stravinsky’s musical development. These are the four sets that he composed in Switzerland during and immediately after World War I: Pribaoutki (Jingles), Berceuses du Chat (Cat’s Lullabies), Trois Histoires Pour Enfants (Three Children’s Tales) and Quatre Chants Russes (Four Russian Songs). They have French or French-transliterated titles because they were published by a Geneva printer with French texts by the novelist Charles-Ferdinand Ramuz, and they were the work of a stateless person, but they are the most intensely Russian pieces Stravinsky (or perhaps anyone) ever composed.

Homesick and imbued with a nationalist fervor he had never felt at home, he became obsessed with Russian folk verses of a kind that had been published in quantity by 19th-century ethnographers but had never been of much interest to composers of art songs because they were, well, artless. But Stravinsky — inspired by the work of the painters associated with Diaghilev, who found not only subject matter but also stylistic models in folk art — saw in Russian folk verses the foundations of a far more authentically Russian art music than his teacher’s generation had achieved.

The consummation of this quest was Svadebka (or Les Noces [The Wedding]), Stravinsky’s choral ballet recreating a Russian peasant wedding, thought by some (well, by me) to represent the composer’s absolute summit of achievement. The songs, written on the way to that towering work, were successful enough as imagined folklore to convince Bela Bartok that they were based on genuine Russian folk melodies. Actually only one tune in all the songs (the first in the Pribaoutki) was “genuine,” that is, found in a book. That Stravinsky managed to take in a connoisseur like Bartok shows he had learned to make up rather than look up genuine folk melodies.

One of the ways he did this was to notice that the verbal accent in Russian folk singing was movable. It could fall on any syllable of any word, leading to all kinds of “wrong” accentuations that produced delightful rhythmic and metrical effects.

Stravinsky’s account of these effects in his autobiography, as told to Nouvel, immediately preceded, and inspired, the famous declaration there that the true value of music was not to be sought in its expressive dimension but in the sound patterns. No public words of Stravinsky’s were ever more potent, more overstated or more thoroughly misconstrued.

To realize what he meant, one need only compare the enchanting songs of the Swiss years, based on distorted folk texts, with Stravinsky’s conventionally expressive, and (say it softly) rather pallid earlier songs. All of a sudden, . . . Stravinsky’s music springs from watery pastels into blazing Technicolor.

Stravinsky continued to set words this way for the rest of his life. In languages other than Russian, his willful misaccentuations are often taken as errors. (Rarely does any reviewer of The Rake’s Progress refrain from setting the poor old Russian straight about English pronunciation.) But in Stravinsky’s manhandling of words he asserted the sovereign power of music, and he did it first in his songs.

. . . Stravinsky’s solo songs include elegiac settings of verses by Dylan Thomas in memory of the poet, who at the time of his death in 1953 was planning to collaborate with Stravinsky on an opera, and by W. H. Auden in memory of John F. Kennedy. . . .

A more significant influence from Schoenberg can be seen in Stravinsky’s late conversion to serial techniques, of which Three Songs From William Shakespeare, composed in 1953, was a harbinger. . . .

The last piece, a past-masterly setting of Edward Lear’s Owl and the Pussycat, was composed nearly 65 years later, in the fall of 1966, and is lovingly dedicated to the composer’s second wife, Vera, who had learned the poem when studying English. Like all the music Stravinsky composed in the last two decades of his life, it uses 12-tone technique. Far from conventional, the piece is anything but forbidding. It is not even dissonant, its tone row having been calculated to yield up pretty harmonies. And the piano part, easy enough for a nonpianist to play, was actually played by Mr. Craft in its first recording, making the piece doubly an intimate family portrait.
Posted by Mark Alburger at 11:00 PM